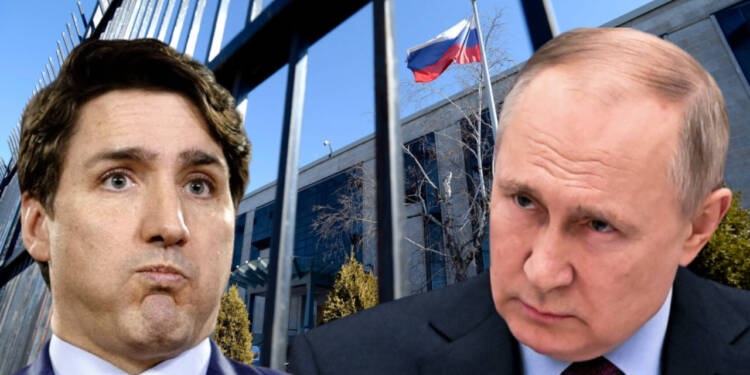 The Russian embassy in Ottawa has been attacked, and there hasn’t been any proactive investigation into the incident. Given that Russia is already stepping up its military buildup in Canada’s backyard, this incident has given an open invitation to Putin’s wrath. This is definitely a geopolitical omen for Canada. However, Trudeau couldn’t care less.

Russia’s ambassador to Canada, Oleg Stepanov, said an unidentified person ran from a nearby park toward the Russian embassy in Ottawa shortly after midnight on Sept. 12 and threw a lit Molotov cocktail over the fence before scampering off. Though the device didn’t ignite and no property was damaged.

Stepanov said his officials provided police with video footage of the Molotov cocktail incident. “We are essentially talking about an attempt to commit a terrorist act,” he stated while speaking to  Sputnik.

However, Trudeau’s ignorant RCMP seems to turn a blind eye to the attacks at the Russian embassy.

Moscow claims that the RCMP witnessed the incident but still did not intervene.

The Russian government said that, in violation of the Vienna Convention on Diplomatic Relations, authorities aren’t doing enough to stop or imprison those who are engaging in “hostile conduct” against its diplomatic workers.

However, the Canadian police force is saying that they were unaware of the incident.

Stepanov also said the embassy should have a permanent police presence.

The question surely arises why there was no security present near the Russian embassy and why the attack was not prevented.

And why is there such a lethargic response to the attack by Canadian officials?

It seems that Justin Trudeau is miles away from the repercussions this could have. We are talking about the Arctic challenge that Canada has completely forgotten about. Already, something has been brewing in the Arctic for so long. Occasionally news would surface about countries lining up to claim their rights for this valuable geography in the northernmost part of the earth. And yes, Russia- the ‘present’ spectre of the world can’t go unnoticed here.

During his recent visit to Canada, even NATO chief General Jens Stoltenberg had said, “Russia has set up a new Arctic command. It has opened hundreds of new and former Soviet-era Arctic military sites, including airfields and deep-water ports. Russia is also using the region as a test bed for many of its new novel weapon systems.”

But the Ostrich Prime Minister always seems to live in a parallel world when it comes to securing Canadian interests and prefers to invite further challenges rather than confront them head-on.

This is what the current incident in Ottawa will lead to.

Ottawa should ensure a swift and clear investigation into the incident, as this is something Moscow will surely need answers to. Otherwise, as we said, a geopolitical omen will definitely fall on Trudeau’s Canada.