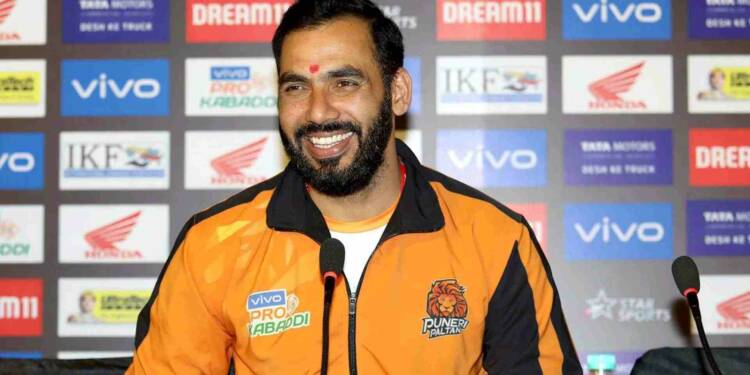 Anup Kumar is an Indian former professional Kabaddi player and Kabaddi Coach of PKL Team Puneri Paltan. He was born on 20 November 1984. In this article we are going to talk about the biography, career, notable works, games and family of Anup Kumar so read the article till the end.

He was a member of the India national kabaddi team that won Asian gold medals in 2010 and 2014, one South Asian gold medal in 2016 and the 2016 Kabaddi World Cup. He was the captain of the Indian National Kabaddi Team. He spent five years with U Mumba and later moved to Jaipur Pink Panthers. In 2012, the Government of India conferred the Arjuna Award on him for his achievements in the sport. He is employed as a Deputy Commissioner of Police in his native State of Haryana.

Kumar, born and brought up in Palra, Gurgaon, Haryana, is the son of Ransingh Yadav, and Ballo Devi. He started playing Kabaddi as a pastime during his schooldays. In April 2005, he joined CRPF as a constable. He represented India for the first time at the 2006 South Asian Games in Sri Lanka. On 19 December 2018, he announced his retirement from kabbadi.

Anup Kumar is a famous professional Kabaddi player and he played so many games for India and franchise teams, this biography article is incomplete without talking about his works and achievements.

From 2014 He played for U Mumba in 2014 He was captain of the U Mumba team in the 2014 Pro Kabaddi League. He won the Most Valuable Player award in the first season of the league, leading his team to the finals where they lost to Jaipur Pink Panthers. He scored 155 raid points in 16 matches, to become one of the most successful raiders of Pro Kabaddi.

In 2015 He led U Mumba to their maiden Pro Kabaddi title in 2015 in which he finished the season with 74 raid points. They defeated Bengaluru Bulls in the final.

In 2016 U Mumba reached the final where they lost against Patna Pirates by a margin of only 2 points. This was the third time when they played the final. A player in his team, Rishank Devadiga, got the award of the most valuable player.

He was retained by U Mumba team. After 3 seasons, the squad of U Mumba was mostly changed but once again with the help of Rakesh Kumar they managed to finish fifth in the season. This was the first season where U Mumba failed to reach the finals.

In 2017 Anup Kumar was retained by U Mumba for the fifth consecutive season.

In season 5, he became the first player in Pro Kabaddi to complete 400 raid points.

From 2018–19 he played for Jaipur Pink Panthers. For the sixth season, Anup Kumar was released by his former franchise U Mumba.

In the auctions, Abhishek Bachchan owned franchise Jaipur Pink Panthers brought him in the auction for 30 Lakhs INR.

He made his international debut in 2006 South Asian Games. Anup Kumar won gold medals at the 2010 Asian Games and the 2014 Asian Games in kabaddi.

He won a gold medal in kabaddi at the 2016 South Asian Games. He captained the Indian national Kabaddi team and won their record third Kabaddi World Cup in 2016.

We hope this biography article of Anup Kumar will be helpful for you to understand his journey and works.