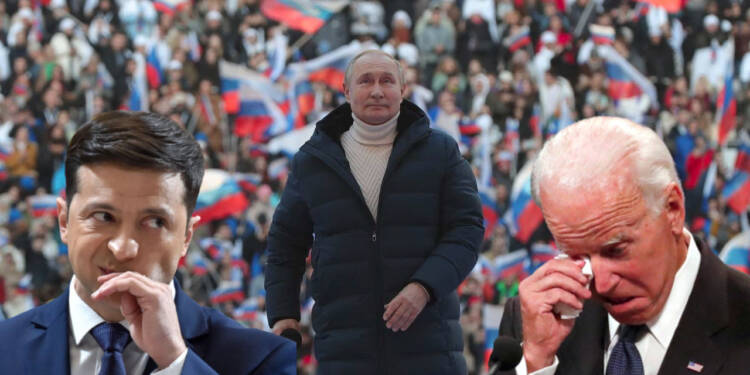 Since the Russian special military operation in Ukraine, the West is hell-bent on showing Russian President Vladimir Putin in a bad light. Rumours of Putin dragging the war, exploiting Russians and facing a blow in the war are a common sight in newspapers. Biden and Zelensky have left no stone unturned to defame Putin. But as they say, ‘Truth can’t be overshadowed for long’. And that is exactly what happening.

In a video address after the meeting of the National Security and Defence Council of Ukraine, President Volodymyr  Zelensky said that Ukraine is ready for negotiations with Russia, but only with another president of the Russian Federation, not with Vladimir Putin.

He quoted, “Ukraine was and remains a leader in negotiation efforts. It is our state that has always offered to negotiate with Russia on coexistence on equal, honest, dignified and fair terms. It is obvious that with the current Russian president, this is impossible. He has no idea what dignity and honesty are. Therefore, we are ready for a dialogue with Russia, but with another Russian president.”

Interestingly this response of the Ukrainian President came after Russian president Vladimir Putin claimed that he wants to stop military action and for “Ukraine to return to the negotiating table”. The statement came earlier on 30 September after Putin signed agreements of accession of territories of Donetsk, Luhansk, Kherson and Zaporizhzhia to Russia.

Read More: After failing in Ukraine, Biden has his eyes set on Central Asia

Putin stated, “We are calling upon the Kyiv regime to cease fire immediately, to stop all military action, stop the war it started back in 2014 and return to the negotiating table. We are ready to do this. It has been stated numerous times.”

Now the thing here to point out is how such statements about the “New President” are coming to light. How come Zelensky ask for a negotiation with a ‘New’ Russian president? Certainly, there is something fishy in this dramatic statement. Zelensky’s statement points out a probable conspiracy of the West to plan a coup against Putin. This won’t be shocking to assume as the West has given many hints before related to its intent to ‘take Putin out.’

Just days after the Russian-Ukrainian conflict started senior US senator Lindsey Graham has on live television called for “somebody in Russia” to assassinate President Vladimir Putin.

“How does this end? Somebody in Russia has to step up to the plate and take this guy out,” the senator stated. He repeated the call later in a series of tweets. “Is there a Brutus in Russia?” asked the senator, referring to one of Roman ruler Julius Caesar’s assassins.

Is there a Brutus in Russia? Is there a more successful Colonel Stauffenberg in the Russian military?

The only way this ends is for somebody in Russia to take this guy out.

You would be doing your country – and the world – a great service.

So you can see that to take Putin out is definitely a strategy of the West and Zelensky. But, the idea of a coup against the leader is a far-fetched one on their part. Why? Because of the admiration Putin has from his citizens. The kind of support the Russian President gets from the Russians is nothing but overwhelming. According to Statista, just last month, around three-quarters of Russians approved of activities of the Russian President Vladimir Putin. And, it was also seen in the recent ceremony held by Putin to declare the annexation of the four Ukrainian regions.

The number of people gathered to listen to him and celebrate with him was huge. You can hear them cheer their President from miles away. They didn’t look disappointed in him or tired of his “arrogance” or didn’t seem like seeing the occupation of territories as “illegal annexation”. A smiling and confident Putin greeted them and, in return, got an energetic and supportive audience.

Here's how Russians are celebrating the annexation of Ukrainian territories. Look at how they cheer for Vladimir Putin.

Does this look like a population looking to overthrow Putin? The West has met its match in Putin, and his popularity scares them.pic.twitter.com/KrqgBkPZsZ

Analyzing how at every step Biden and his administration tried to slander Putin shows that the efforts to oust him are not that superficial, but they are definitely delusional. Putin is clearly a strong-headed leader whose actions are ratified by his countrymen. So, the West should get over its habit of interfering in other nations’ matters especially related to the leaders the people want to follow. Also, Zelensky should get out of his bubble and accept the mess he has made out of Ukraine and its people. It’s high time his delusions should stop and he comes to the right senses.