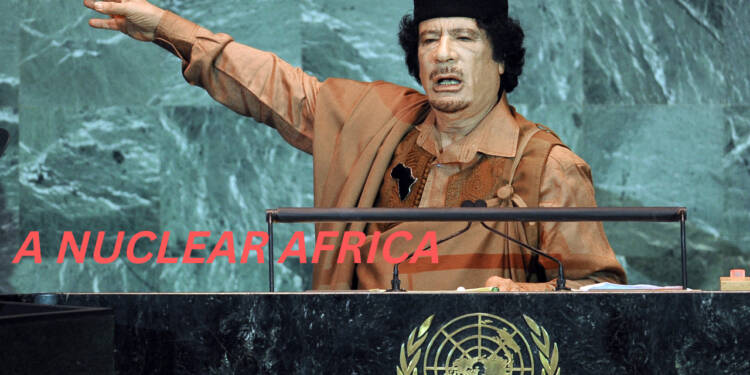 Libya and South Africa once had nuclear programs. These nations realized the importance of nuclear weapons in international affairs and went for it. In geopolitical affairs, a country which possesses nuclear weapons is considered powerful and has a say in the international forum. There was a time when the government of Libya invested huge amounts of wealth and resources in the creation of the nuclear programme, scientists, defense officials, industrialists etc all had a stake in it. Libya understood the significance of nuclear weapons in global politics which is dominated by the US and EU. Unfortunately, in 2003 Libya’s dictator Muammar Gaddafi publicly renounced the nuclear, chemical and biological weapons programme and invited international inspectors to his country to inspect his adherence to Nuclear Nonproliferation Treaty.

The US was successful in its ulterior plans to make the North African country subservient to it. The superpower is well aware of the fact that if a nation gets access to nuclear weapons then it will start questioning its authority. Many former Libyan government officials later regretted the decision to renounce their nuclear programme. Similarly, South Africa too had nuclear weapons. During the 1960s, the government showed an interest in developing its nuclear programme. There were a series of developments which led the South African government to understand the importance of nuclear weapons. Its neighbours Mozambique and Angola which achieved independence from colonial rule by the Portuguese in 1975 were fighting with communist forces backed by the Soviet Union. Security crisis in the world made South Africa realise the necessity of nuclear weapons.

In 1968, when the South African government refused to sign the Nuclear Nonproliferation Treaty by the West, then it had to suffer the wrath of the US. South Africa, which had nuclear ambitions, was barred from participating in the United Nations, its athletes were not allowed to take part in the olympics, rugby teams were banned and aid was suspended. All because South Africa refused to follow the orders of the US.

Finally in 1991, South Africa decided to close its nuclear testing site and uranium facility. South Africa was hoping that the US and EU will reintegrate it into the international system and lift sanctions.

Why are nuclear weapons indispensable for Africa and Asia?

In geopolitics, nuclear weapons are necessary. Nations that possess it, command respect from superpowers. The US and EU are afraid of those countries which currently have nuclear weapons as they are strong enough to hinder any attempt by Biden, Macron, Olaf, etc to interfere in their internal matters. In today’s international circumstances, at a time when the US and EU are imposing sanctions on nations which do not agree with them, the need for nuclear weapons becomes indispensable for political and economic stability. Today, the former Libyan government officials are regretting their decision to dismantle the nuclear programme, it is a lesson for Africa and Asian countries that why the US must never be trusted.

If nations don’t have nuclear weapons, then Western countries will not respect their sovereignty, will disregard their territorial integrity and won’t think twice before invading them. The need for nuclear weapons for countries rich in mineral resources is especially important. Countries like Democratic Republic of the Congo, Kenya, Tanzania, Uganda etc which have gold, cobalt, uranium, copper, bauxite, oil and gas must have nuclear programmes, failure to do so will only increase the threat posed by the US and EU which are desperate to establish their control over their wealth. Had Iraq had nuclear weapons, the US would not have been able to cause so much destruction. Had

Today, African and Asian nations’ hard-earned democracy, peace, constitution and rich resources need to be protected from the vultures of the West. The influence of neo-colonialism can be curbed by the prevalence of nuclear power in the so-called Third World. Libya and South Africa are a cautionary tale when it comes to trusting the US and EU.