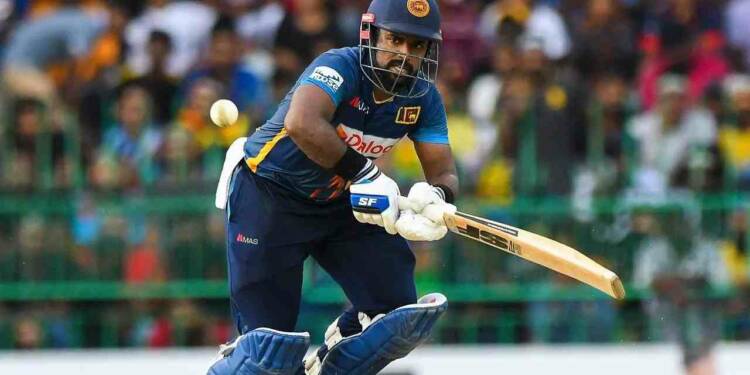 Kariyawasam Indipalage Charith Asalanka is a Sri Lankan professional cricketer serves as the vice-captain of the national team in Limited overs cricket. In this article we are going to talk about the biography, career, notable works, games and family of Charith Asalanka so read the article till the end.

Charith Asalanka is an international cricketer and he played so many games for his country, state and clubs this biography article is incomplete without talking about his career. So here you will gain info about his achievements and life story.

Charith Asalanka made his first-class debut in April 2015, in the match to decide who should take the final place in the Premier Trophy in the following season. His team, Galle, batted first and were all out for 31. Sri Lanka Air Force Sports Club made 215 in reply.

In their second innings Galle lost their first wicket in the second over, but Asalanka, batting at number three, hit 114 off 123 balls, and Galle totalled 295. Sri Lanka Air Force Sports Club needed 112 to win, but Asalanka took 4 for 34 (Malith de Silva, also making his first-class debut, took 6 for 46) to dismiss them for 107, and Galle won by four runs.

In March 2021, Charith Asalanka captained Sinhalese Sports Club as they won the 2020–21 SLC Twenty20 Tournament, the first time they had won the tournament since 2005.

On January 16 2022, in the first ODI against Zimbabwe, Asalanka scored his fourth ODI half century. While chasing down 297 runs he scored 71 runs from 68 balls hitting six fours and two sixes. Asalanka and Dinesh Chandimal put on a 132-run partnership. Sri Lanka won the match by 5 wickets.

On 3rd ODI match against Zimbabwe, Asalanka scored fifth ODI half century. He scored 52 runs from 56 deliveries. During that process Asalanka scored 2000 List A runs. Finally, Sri Lanka won the match by 184 runs and won the series. Asalanka won player of the match award for his performance.

He was born on 29 June 1997. Charith Asalanka, who plays all three formats of the game for the national team. A left-handed batsman, Asalanka made his international debut for Sri Lanka in June 2021.

Charith Asalanka toured England with the Sri Lanka under-17 team in 2013, opening the batting and top-scoring in each innings with 92 and 31 in a three-day match against an English under-17 team at Loughborough. He opened the batting for his school, Richmond College, Galle in 2014-15, helping them into the final of the schools’ twenty-20 competition.

Charith Asalanka captained the national under-19 team against under-19 teams from Australia and Bangladesh in 2014-15. In the five-match limited-overs series against Bangladesh under-19, he was Sri Lanka’s highest scorer, with 225 runs at an average of 45.00, and second-highest wicket-taker, with eight wickets at 21.00.

Charith Asalanka was most prominent in Sri Lanka’s victory in the first match, with 4 for 36 and 63. He was awarded Schoolboy Cricketer of the Year award in the years 2015 and 2016 becoming only the seventh player to win the award twice.

We hope this biography article of Charith Asalanka will be helpful for you to understand his journey and works.