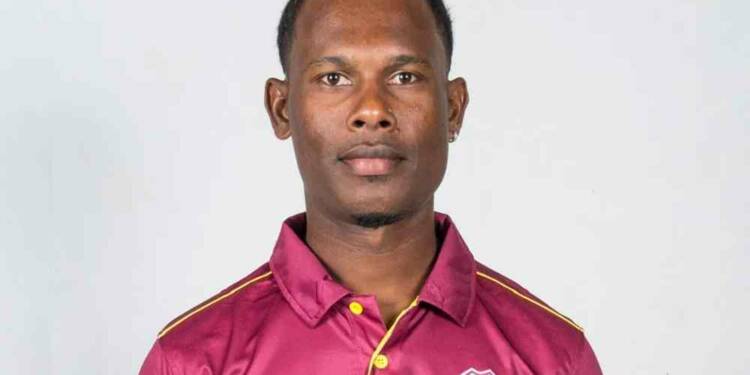 Jason Nazimuddin Mohammed is a West Indian international cricketer. He was born on born 23 September 1986. He plays first-class and List A cricket for Trinidad and Tobago. In this article we are going to talk about the biography, career, notable works, games and family of Jason Mohammed so read the article till the end.

Jason Mohammed is an international cricketer and he played so many games for his country, state and clubs this biography article is incomplete without talking about his career. So here you will gain info about his achievements and life story.

He made his T20I debut for the West Indies against Pakistan on 1 April 2017. On 6 April 2017, West Indies chased the highest total in their cricket history, Jason had a major role in that chase by playing an innings of 91 not out.

Needing 128 off 13 overs, Mohammed supported by Ashley Nurse sailed West Indies to a historic victory. He was declared Man of the Match. On 29 September 2017, against England he captained the West Indies for the first time in ODIs.

In March 2018, Mohammed was named as the captain of the West Indies squad for their Twenty20 International (T20I) series against Pakistan.

Jason is an aggressive right-handed middle-order batsman and a part-time off spinner. In 2006, he made his debut in first class and represented West Indies in the Under-19 World Cup. Since then, he has been in the squad for most of T&T’s first-class matches. He made his ODI debut in 2011 against India at Chennai before playing his next ODI almost 4 years later in 2015.

In August 2019, Jason joined the St. Kitts and Nevis Patriots as a replacement for Isuru Udana. In November 2019, he was named in Trinidad and Tobago’s squad for the 2019–20 Regional Super50 tournament.

In February 2020, in the fourth round of the 2019–20 West Indies Championship, Mohammed scored his tenth century in first-class cricket. In December 2020, Mohammed was named as the captain of the West Indies’ ODI squad for their series against Bangladesh.

Where is Jason Mohammed from?

Jason Mohammed, the middle-order batsman from Trinidad, has often been the man West Indies have turned to in a crisis.

We hope this biography article of Jason Mohammed will be helpful for you to understand his journey and works.

Trudeau’s last war: All 13 premiers of Canada take on Justin