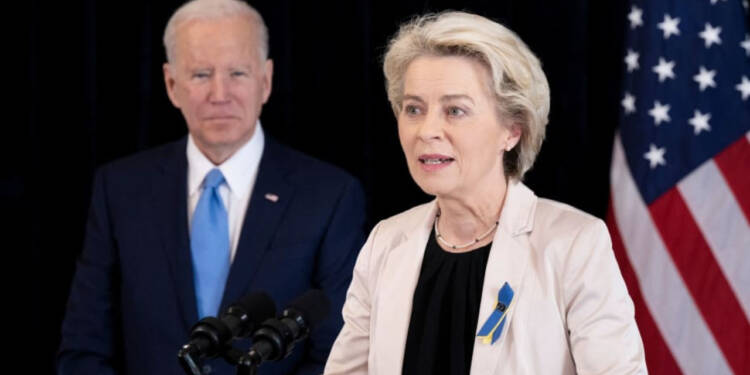 Europe gas crisis: A cold war is brewing up between US and Europe. Despite all the camaraderie for the camera, the trans-Atlantic partnership between the US and Europe is seeing a watershed moment. Demented Biden has vowed to spoil US’ relationships with its allies, but Europe won’t sit back in peace. It warned Biden of repercussions if his short-sighted and protectionist policies continue.

Taking it to another level, the US has now threatened to cut gas supplies to Europe. Last year in July, the US government under President Joe Biden approved a new ”Buy American” rule. The rule was seen as a protectionist move as US sought to compete with automobile companies of other countries, mainly European and build a more durable domestic supply chain.

The move aimed to increase the existing 55% minimum US-made content requirement to 75%  for any goods acquired using taxpayers’ money. The law will be implemented gradually, according to a senior government official, to give businesses time and room to change their supply chains. Beginning this year, the minimum will rise to 60% in October and reach 75% by 2029. That was the beginning and chapter 1 of a trade war between Europe and USA. It was a direct attack on the European, Korean and Japanese companies as doing business after this would become harder for them.

In response, to protect European automakers in reaction to the United States’ own problematic programme to encourage domestic manufacture, Emmanuel Macron called for a “Buy European Act.” It was chapter 2 of the Trade war.

The US also brought the Inflation Reduction Act under which electric vehicles are eligible for a $7,500 tax credit. Starting in 2023, the tax credit is subject to new limits. Vehicles must be produced in the United States, but there are now stricter requirements for the mineral composition and the components of EV batteries.

Countries view the EV and automobile sections of ‘Buy American’ and ‘Inflation Reduction Act’ as being both against international trade laws.

The European automobile sector has a substantial economic multiplier impact. It is crucial for downstream businesses like ICT, maintenance and mobility services as well as upstream industries like steel, chemicals, and textiles. If we talk about its significance, employment in the EU automotive sector is estimated to be 13.8 million. The automobile industry alone accounts for more than 7% of the EU GDP revenue.

In a recent event between French President Emmanuel Macron and German Chancellor, Berlin has come in support of the French initiative. Historically, Berlin has been more reticent to criticise the US on trade and other matters. But, this time Scholz agrees that the EU will need to implement countermeasures to the American plan if Washington refuses to address significant concerns highlighted by Berlin and Paris. That was the Chapter 3.

US threatens to cut gas supply to Europe

In retaliation to the joint front put by Germany and France, the US has hit a European nerve. First, Biden administration forced Europe to halt the certification of Nord Stream 2 after the Ukraine war. To make Europe dependent on itself, US staged the sabotage of Nord Stream pipelines.

Now after cutting cheap Russian gas off the continent, the US has started to weaponize its LNG exports. According to a Reuters report, many US’ LNG tankers are now anchored off the coast of Spain’s Bay of Cadiz and are expected to remain there until late November.

Numerous ships have denied to offload their LNG cargoes as the prices of LNG have gone down lately. According to Rystad Energy, European natural gas prices have dropped 28% in a week, to their lowest level since June. They have refused to sell their LNG at cheap prices. They realise that before the winter, Europe needs to procure LNG and fill its storage. And, as LNG prices are bound to grow now, Europe is nearing de-industrialization.

US understands that if gas storage of Europe isn’t filled to the brim before winter, it’s bound to face a gas crisis. And if that happens, companies and industries will be forced to shut down. They would have no other option but to shift their operations to other countries. And ‘Buy American’ and ‘Inflation Reduction Act’ at this time have enough capability to attract European businesses to the US. But, Europe isn’t going to take this move by US LNG companies lightly and will fight back strongly and fiercely. So, let’s brace ourselves for the outcomes.