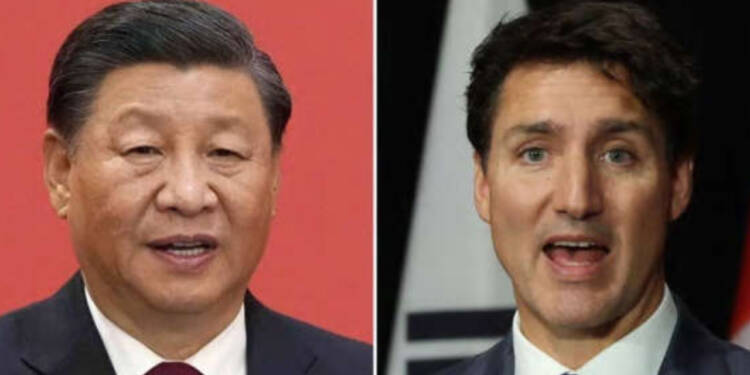 By now, you must have seen a video doing rounds on the internet. It’s video footage showing Xi Jinping confronting Trudeau, or as Canadian media portrays, “ Trudeau confronting Xi Jinping.” Xi and Trudeau could be seen standing close to each other and having a tough talk via a translator. And what we see is a dramatic conversation unfolding, where the Canadian PM is being scolded by his Chinese counterpart. So what exactly happened? And what it explains for the China-Canada relationship ahead. Let’s find out

As world leaders gather at the ongoing G20 summit in Indonesia, it was expected that Mr. Trudeau will address the various concerns he has with his Chinese counterpart. Though Mr. Xi had an official bilateral meeting planned with U.S. President Joe Biden, leaders of Australia and Japan, as well as Indonesian President Joko Widodo. Justin Trudeau was not on the list.

However, the Canadian media reported that Mr Trudeau was able to grab a brief, unofficial aside with Mr Xi on Tuesday, during which he raised concerns about alleged Chinese interference in Canadian elections. This meeting happened on the condition of anonymity as they were not authorised to speak publicly about the matter.

The very next day, the two had a brief encounter at an event in Indonesia that news outlets were able to record. A television camera was behind a Chinese interpreter and recorded a clear view as the two spoke.

“Everything we said has been leaked to the papers – that’s not appropriate,” Mr Xi says, adding, “that’s not the way the conversation was conducted.

“If you are sincere, we should communicate with each other in a respectful manner, otherwise, it will be hard to say what the result will be like,” he says as Mr Trudeau nodded.

Mr. Trudeau then responds that he hopes the two sides can continue to “work constructively together,” adding, “In Canada, we believe in a free and open and frank dialogue,” to which Mr. Xi replied, “Let’s create the conditions first,” before shaking the Canadian leader’s hand and walking off.

NEW – Xi to Trudeau at G20: Everything discussed yesterday "has been leaked to the paper(s), that’s not appropriate" and "that’s not the way the conversation was conducted."pic.twitter.com/h6kb9sMPfx

A scared and embarrassed Trudeau then runs away hastily avoiding any public eye or camera.

The whole incident has managed to garner a lot of media attention and public interest internationally, where it has been described as a rare or unusual sight at any such meeting.

Later, answering the queries from reporters, Trudeau said, “Not every conversation is always going to be easy, but it’s extremely important that we continue to stand up for the things that are important for Canadians,”

Well, right now, what’s important for Canadians is getting answers, not the international embarrassment you’re bringing, Mr Trudeau. Trudeau has been able to gain attention from this entire episode and get the headlines he may have desired in Canadian media, such as “Trudeau confronts Xi about national security issues.”

But in the end, what matters is a diplomatic solution. You see, the public needs an answer about who exactly benefited from the Chinese interference in the 2019 elections. But has the government been able to provide any answers on that? No. Opposition parties are blaming the Liberals for benefiting from the alleged interference. Has the government been able to counter that? No.

Read more: Canada’s mining industry is officially in the clutches of USA and China

So definitely, this act of failed diplomacy will not bring any good points to Trudeau’s report card.  It was a blatant demonstration of the humiliations that Trudeau continues to bring to his country and fellow citizens.

CAR president is a Russian ally, and Biden has now asked UN “peacekeepers” to topple him