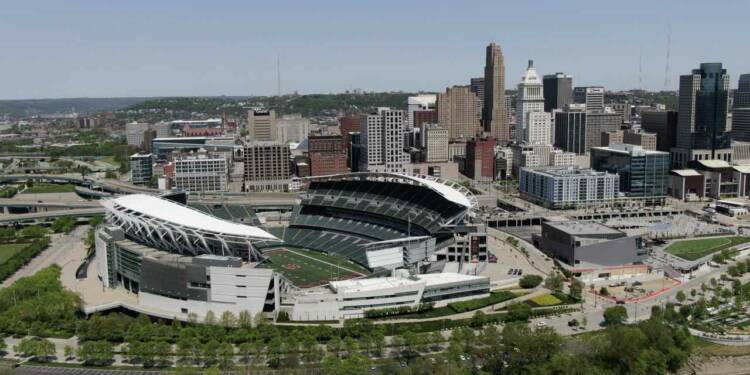 Paul Brown Stadium is an outdoor football stadium which is located in Cincinnati, Ohio. On August 19, 2000 this stadium is opened and it is the home venue of the Cincinnati Bengals of the National Football League. Here we have collected Paul brown stadium seating chart image and overview for you.

This stadium is Named after Bengals founder Paul Brown, this stadium is on approximately 22 acres of land and has a seating capacity of 65,515 peoples. Paul Brown Stadium is nicknamed as “The Jungle”, not only to the name of the Bengal tiger’s natural habitat but also the unofficial anthem for the team is the Guns N’ Roses song “Welcome to the Jungle”.

In the year 1996, Hamilton County voters passed a one-and-a-half percent sales tax increase to fund the construction of two new home venues for both the Bengals and MLB’s Cincinnati Reds. The Bengals and the Reds previously shared the tenancy of Riverfront Stadium, but both teams complained that the old multi-purpose facility lacked modern amenities and other things that small-market teams would need to survive. Paul Brown Stadium was built first to the west; After the Bengals left, Synergy Field installed natural turf and was partially demolished to allow construction of the adjacent Great American Ball Park to the east. Following the 2002 baseball season, Synergy was demolished on December 29. The Bengals have hosted four NFL playoff games at Paul Brown Stadium with no wins.

In the year 2018, this stadium was equipped with a advance and new top-of-the-line synthetic turf system. Manufactured by Shaw Sports Turf, the product consists of Strenex XD slit-film fibers backed by UltraLoc, the strongest synthetic turf backing in the industry. Two LED video displays in either end zone, installed in 2000, provide a good view of the on-field action for each spectator. Over 200 feet of ribbon displays were installed along the stadium’s fascia. The scoreboard and ribbon were later upgraded to a larger HD model following the 2014 off-season.

Facilities of the Stadium

Paul Brown Stadium also provide the Bengals’ administrative offices and training and practice facilities. The playing field at Paul Brown Stadium is Momentum Pro, manufactured by Show Sports Turf. There are three smaller practice fields nearby. Two are lined with natural grass, while the third is equipped with AstroTurf.

Several local busing companies provide round-trip transportation to Paul Brown Stadium from designated locations in Cincinnati and the northern Kentucky area. One such example is Cincinnati Metro’s Jungle-to-Jungle Express, which departs at Jungle Jim’s International Market in Fairfield, a suburb of Cincinnati.

High class seating options are available in 114 private suites and 7,600 club seats. Amenities include in-seat are food and beverage service and access to the Club Lounge for fine dining options.

For site retail merchandise sales are available at the Bengals Pro Shop are located on the Plaza level at the north end of the stadium. There are 56 concession stands and eight stores in the stadium.

Architecture of the Paul Brown Stadium

The stadium was designed by the architectural firm NBBJ, headed by Dan Mees. It was the first NFL facility to win an AIA Design Award, and one of only two sports venues to be honored. Open corners allow views into the stadium, while stadium fans can see the city skyline and bridges crossing the Ohio River.

What are canal rays? Detailed Explanation