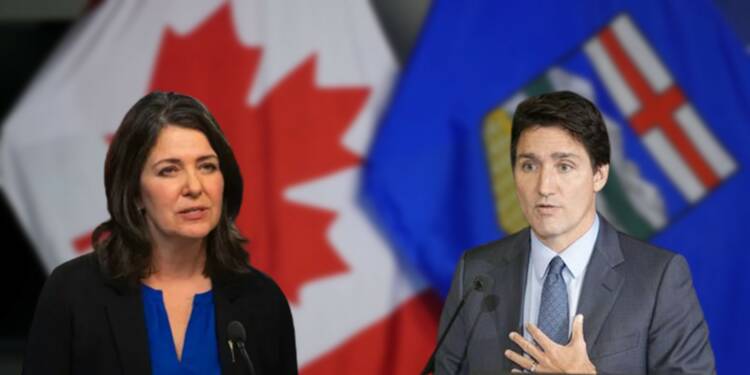 Alberta Sovereignty Act: Trudeau administration’s dictatorial policies have largely become a matter of concern and are sowing the seeds of disunity among the Canadian populace.

And, not just Alberta, a domino effect is in motion across Canada in almost all provinces.

After months of anticipation, Premier Danielle Smith on Tuesday unveiled her landmark legislation in the Alberta legislature, giving her cabinet an increased authority to alter the law without the consent of the house.

The Alberta Sovereignty within a United Canada Act fulfils much of what Smith pledged during the leadership campaign of premiership. It gives Alberta the authority to instruct provincial agencies to take action against federal laws it considers unconstitutional or harmful to Albertans.

As Smith introduced the bill, she said, “This legislation is designed to be a constitutional shield to protect Albertans from unconstitutional federal laws and policies that harm our province’s economy or violate Alberta’s provincial rights.”

Now, under the sovereignty act, Alberta MLAs can designate federal programs as being unconstitutional, detrimental to Albertans, or both.

Using these categories, a Minister can put out a motion naming a particular federal law or policy while outlining how it violates the constitution or is bad for the province.

Following that, the legislative assembly would discuss and decide on the proposal. If approved, the resolution would give cabinet the go-ahead to carry out certain tasks.

Some federal bills are a bone of contention between Alberta and the federal government.

For example, the Canadian government introduced Bill C–69 in the Canadian Parliament three years ago. Under this act, Justin Trudeau proposed to replace the National Energy Board Act with the Canadian Energy Regulator (CER) Act. This bill is also known as the ‘No More Pipelines’ bill.

After the bill got cleared and became an act, the act was known as the ‘Impact Assessment Act’ (IAA) as the federal regulators got the leverage to consider the effects of major construction projects, like pipelines on a range of environmental and social issues, including climate change.

The Alberta province severely criticized this act. Since 2019, the Alberta Province and the federal government were at odds over the Impact Assessment Act. In order to oppose federal Bill C-69, any potential mandates for mandatory fertiliser cuts and emission reductions, the confiscation of firearms, and funding for health care and education with conditions attached, Smith has instructed her ministers to draught special resolutions under the proposed act for the spring legislative session.

Albertans have genuine grievances with the Trudeau administration. Trudeau wants to shut down Alberta’s most valuable industry—the oil and gas sector. The Hub reports that Alberta contributes billions of dollars to the Canadian government and other provinces and gets back lesser funds in return. And the government that benefits from this largesse is conspiring to shut down Alberta’s most valuable industry. Successive federal governments have used provincial transfer payments to curry favour with vote-rich provinces at Alberta’s expense.

Along with Alberta, nine other provinces have also joined forces to appeal against Bill C-69 in Canada. All nine of Canada’s other provinces have filed letters of intervention with the Supreme Court of Canada indicating their desire to nullify the bill. In this backdrop it looks like Alberta Sovereignty Act will trigger a domino effect among every province of Canada.

So, it has become crystal clear how Trudeau’s policies are creating rifts in Canada’s unity. Frankly speaking, the leftists may tell you that Alberta Sovereignty Act reflects badly on Canada’s image on the international stage, but Trudeau’s dictatorship has sadly made it a necessity.