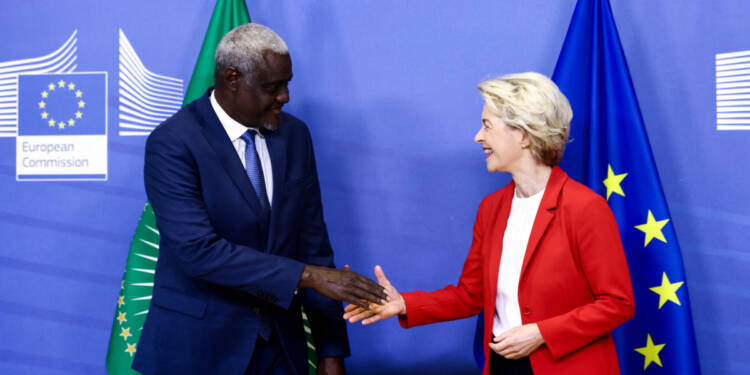 The Russia-Ukraine crisis delivered far-reaching impact to the world, more so for the West. In the backdrop of Europe’s sanctions on Russia backfiring, it is reeling under its worst energy crisis. Europe is also facing credibility crisis in Africa while China has been making significant inroads in the region. Now, to deal with all these, Europe has finally come up with a plan. It is the Global Gateway Plan.

The European Commission has announced a plan, called Global Gateway. It plans to mobilise €300 billion by 2027 in public and private infrastructure investment around the world. Further, as part of this plan, EU will invest $150bn in various projects in Africa.

It plans to fund projects in infrastructure, energy and food security in Africa. Although, the plan doesn’t mention China, but EU through its Global Gateway Plan aims to compete with China’s BRI scheme.

China’s debt-trap diplomacy is well-known in Africa. The continent has received a large chunk of the investments from China’s ambitious BRI Scheme. China floods a developing country with so much debt that it is unable to repay it and then is compelled to sacrifice a vital asset instead. African countries with their high corruption levels and political instability, insurgency are more prone to fall for this trap which can seriously undermine sovereignty of these countries.

We at TFI have already explained earlier how China uses its “Palace diplomacy” to increase its influence. Countries like Zimbabwe, Burundi, Liberia etc have already fallen prey to it. This is not all. Apart from low interest loans, refurbishing government facilities, even personal perks for African leaders can also be used by China to increase its influence in Africa. There are reports that the Chinese government has made direct cash transfers to heads of state or ruling parties in various African countries.

Further, China has already invested around €180 bn in 46 African nations.

All of this make Africa extremely vulnerable to Chinese agenda.

Read more: How China controls Africa with bricks and mortar

Now, in a last-ditch attempt EU has come up with its ‘Global Gateway Plan for Africa’ to counter China’s BRI, salvage its soaring relationship with Africa and also to utilize Africa’s vast natural resources for its benefit.

It is to be noted here that Global Gateway plan represents a shift in the EU’s foreign policy from development aid to investments in key infrastructure projects and the energy and productive sectors. The fact that almost half of EU’s €300bn Global Gateway investment strategy is deployed in Africa signifies the importance Europe has accorded to the continent in its attempt to counter China’s growing influence through BRI.

Thus, it can be said that EU is not shying away from taking a shot at China’s BRI, albeit indirectly, to woo the African countries.

On the contrary, Europe’s influence in Africa is at an all-time low. However, the West can’t just leave Africa, more so because of the fact that it is looking for alternative energy sources ever since sanctions were imposed on Russia. Europe’s old tactics of creating instability in Africa to capture its resources have more or less been exposed and failed. Europe today desperately needs Africa’s riches. Africa’s role can be critical in supplying natural gas to Europe.

All in all, this is a win-win situation for Africa. The AU-EU partnership can go a long way in ensuring that it mitigates some major energy and food security challenges posed by the Ukraine-Russia crisis for both the continents.

Europe has also promised investment to facilitate African countries’ transition from fossil fuels, notably the Africa-EU Green Initiative, which is estimated to lead to investments of $150bn.

However, Africa should also be cautious in the sense that it must not hand over its strategic assets to Europe in any way. Africa must remain a strategic priority for Europe. Africa will benefit immensely as long as the bargaining chip remains in Africa’s hands. Gone are the days when Europe used to dictate its terms to Africa but now the tables have turned and Africa must utilize it to the maximum.