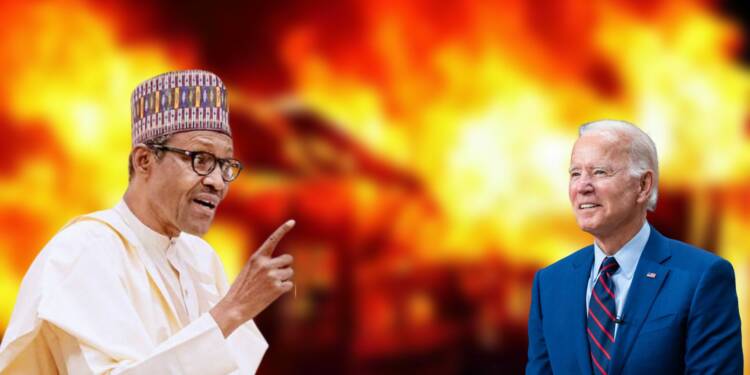 Nigeria Fire: Nigeria’s growing economic clout in Africa has many stories. It’s the biggest economy in the continent. However, Nigeria’s wealth is something that the West, specifically the US desperately needs. As Nigeria is going for the polls in 2023, the US seems to be leaving no stone unturned to somehow influence the outcome so that it can install its puppet regime in the country. Obviously, the US’ covert operations to overthrow foreign governments to support its own strategic interests are well known. Now, it’s Nigeria that has been facing this imminent danger to its democratic system.

A surge of violence targeting Nigeria’s election commission offices are raising concerns about the security of the West African country’s upcoming February elections.

In the latest attack, an office of Independent National Electoral Commission of Nigeria was set on fire by insurgents. Nearly 50 of the commission’s offices already have been destroyed since Nigeria’s last election in 2019, according to local reports compiled by The Associated Press.

Africa’s most populous nation with more than 210 million people is reeling under Islamist insurgency that is posing considerable threats to peaceful elections.

This raises speculation of outside forces meddling in Nigeria’s elections. We have explained to our readers before how Boko Haram is used by CIA to secure American interests. American interference in far flung countries to maintain its hegemony has ultimately resulted in widespread violence that destabilized nations. The recent example is Afghanistan. The US created Taliban to oust Russia from Afghanistan. The consequences of it are out in the open for all to see.

In the same way, it aided Boko Haram, that now wants to disrupt Nigerian elections.

Since the election campaign kickstarted, the INEC (Independent National Electoral Commission) has so far recorded 51 politically motivated attacks in 21 states of the federation. One of the primary targets is its own offices.

Elections with no outside interference could have ensured that democracy flourishes in Nigeria, bringing political stability and ultimately leading to economic prosperity. But the US’ greed for resources won’t let this happen. Nigeria is one of the largest oil producing countries in the world and US’ greed compels it to try and capture Nigeria’s mineral wealth.

Only recently, the Nigerian government through the National Centre for the Control of Small Arms and Light Weapons (NCCSALW) said it had intensified the mopping up of illicit small arms and light weapons nationwide ahead of the 2023 general elections.

This crackdown was important as it might have just thwarted some of the efforts by outside forces to influence its election outcomes.

Mysterious fires and attacks on Election Commission Offices have destroyed important records and materials related to the upcoming elections, including voter ID cards.

Nearly 50 of the commission’s offices already have been destroyed since Nigeria’s last election in 2019, according to local reports compiled by The Associated Press.

There are reports that almost 70,000 permanent voter ID cards were destroyed earlier when a government office in Nigeria was set ablaze. In Ogun, a state in Nigeria, over 65,699 voter IDs were burned.

If the West is found to be orchestrating these violent events to influence election outcomes in Nigeria, would it be a surprise, at all?  One can only hope that Nigeria succeeds in resisting such outside interference in their domestic affairs and is able to conduct free and fair elections.