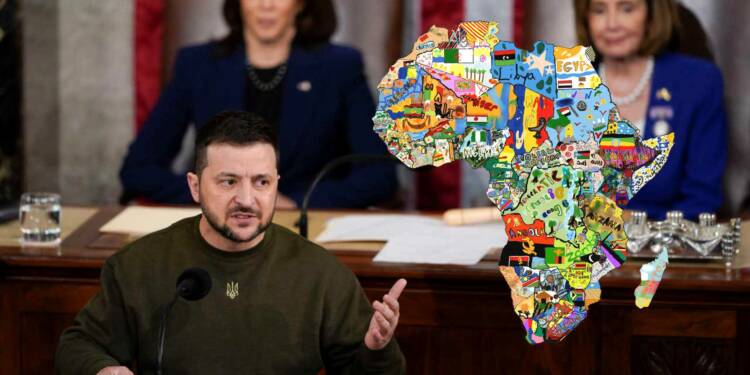 Many experts regard the Russo-Ukrainian War as a watershed incident in world politics that annihilated the post-Cold War international order. The struggle is also significant in the Global South, resurrecting non-alignment and independent foreign policy as geopolitical tensions between the West and Russia rise.

The battle has demonstrated that many countries in the Global South, notably in Africa, prefer not to back the West. The lack of unequivocal endorsement from several African states has perplexed Western policymakers. Many African countries have emphasised their right to defend their own interests rather than merely accepting the dictates of larger, wealthier powers.

In the days before Russia’s bombing escalation in Ukraine in early October, Ukrainian Foreign Minister Dmytro Kuleba was visiting Africa in a bid to garner support and counter Moscow’s propaganda about the war. While much of the Western world has rallied around Ukraine, African states have largely avoided taking sides. For its part, Russia has been on a diplomatic offensive in much of the Global South, lobbying African, Asian, Latin American, and Middle Eastern countries to not join international sanctions and condemnation against Moscow.

Kuleba’s early October trip to Kenya, Senegal, Ghana and Côte d’Ivoire was the Ukrainian government’s first diplomatic tour of Africa in decades according to the foreign minister.

The trip was cut short by Russian missile strikes on civilian targets in Kyiv and other parts of Ukraine. But Kuleba tried to laid the groundwork for future efforts to counter Russian dominance and positive to neutral perceptions of Russia across the African continent, build greater international support for Ukraine’s fight against Russian aggression, and advance partnerships with African governments focused on areas of mutual interests.

Well, the comedian-turned-President is clearly delusional if he believes African nations will endure sufferings simply because he delivered a speech with lofty notions of brotherhood.

African countries have always despised being used as a stage for distant power battles taking place in distant capitals.

African governments’ requests for vaccines of COVID-19 fell on deaf ears in rich nations with more than enough to spare. The same goes for Africa’s request for cash to combat climate change.

Where was Ukraine’s President at that time? Couldn’t he show solidarity with his African “brothers in arms”? When Africa has a concern, it is left to fend for itself; when there is an ‘international problem,’ as defined by the West, it is a global problem? Why should African countries tolerate Zelensky to exploit them as scapegoats?

Besides, while Russians and Ukrainians continue to be the main victims of the conflict, there have also been significant indirect consequences on the world’s food and energy systems. However, the unrest is not limited to Europe. Indeed, the war has wreaked havoc on a different continent, unleashing a “three-headed dragon” of food, energy, and financial shortages across Africa, further endangering the lives of those who are already at peril and placing dozens of nations at risk of default. Many African nations are right to have adopted a prudent geopolitical strategy in response to the need to address food shortages by either remaining neutral or covertly endorsing Russian President Vladimir Putin. They were conscious of the devastating effects that a confrontation with Russia—a significant supplier of resources to Africa—would have had on their individual economies.

African countries have recently chastised Western leaders like Zelensky for their dominating and paternalistic behaviour towards African countries, as well as for attempting to impose their policy agenda on the rest of the world. Africa is confident in its independent, non-aligned foreign policy, which avoids conflict with superpowers. African nations are no longer easily intimidated by the world’s big powers. They oppose what they see as imperialism and egocentrism. It is pure fantasy if Zelensky hopes that his faux counterfeit show of compassion will persuade African nations.