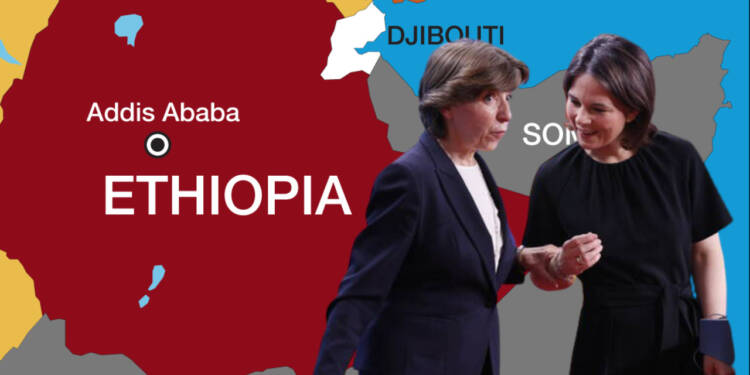 The Ethiopia-Tigray conflict has gone on for two long years. The crisis has ravaged the country and its people have faced the worst forms of atrocities in the last two years. More than 20 million people in Ethiopia, including 5.2 million people in Tigray, were in need of aid due to the conflict that started at the end of 2020. The conflict has had devastating consequences on food security resulting in malnutrition that impacted millions of lives. Now, after a peace treaty was recently reached, two European diplomats are visiting Ethiopia to help “end the war” and consolidate peace. However, it seems like EU isn’t doing Africa a favor at all but it is acting only to safeguard its own interests.  Let’s discuss this.

French Foreign Minister Catherine Colonna has recently announced that she would travel to Ethiopia with her German counterpart Annalena Baerbock “to consolidate peace”. The Ethiopian government and Tigrayan rebels signed a peace treaty on November 2. As part of the treaty, both parties vowed that they were determined to make the peace deal last. It has given rise to hopes that finally there will be an end to the bloody civil war that lasted for 2 years.

Now as per the report, the two European diplomatic chiefs are visiting Ethiopia to “consolidate the peace agreement” and “to support the action of the African union”.

The peace agreement provides in particular for the disarmament of rebel forces, the restoration of federal authority in Tigray and the reopening of access and communications to this isolated region since mid-2021. The visit of the two heads of diplomacy would take place on January 12 and 13, according to the report. Further, they will also discuss food security as well as relations between Ethiopia and the European Union, as well as relations between the EU and the African Union.

Ever since the armed conflict broke out, it created a full-scale humanitarian crisis in and around Ethiopia’s Tigray, Amhara and Afar regions. It resulted in 2.6 million internally displaced people, over 240,000 returnees and more than 97,000 refugees & asylum seekers in the Afar, Amhara and Tigray Regions.

We at TFI have previously told our readers how the West, especially the US has supported the TPLF politically or diplomatically throughout the war. However, now the crisis in Ethiopia has turned out to be a nightmare for Europe too.

What Europe actually fears is that a possible refugee crisis might hit the continent which is already going through a serious energy crisis at home. Since the crisis began, more than 3,000 people have been fleeing daily from Ethiopia’s Tigray region into eastern Sudan. As of March 2022, nearly 60,000 refugees and asylum seekers have been welcomed in Sudan. A year back, after the Ethiopia civil war began, an EU envoy had already warned of a “refugee crisis” that Europe might have to deal with and thus called for early intervention to mitigate the crisis.

Finland’s foreign minister had warned that the Ethiopia civil war could fuel a new EU refugee drama, amid “out of control” violence. He further added that “If you don’t influence it now, then the circumstances will build so that there are more and more refugees coming [toward Europe],”.

Sudan was already struggling to cope with Ethiopians who had fled the crisis. Emigration from Ethiopia has risen dramatically and it serves as a central hub for people journeying across the Horn of Africa, particularly migrants from Eritrea and Somalia aiming to reach Europe and other northern destinations. Thus, at a time, when the Ukraine war has already left Europe gasping for gas and its major economies are going through a recession-like situation, it can’t afford a possible refugee crisis. Thus, it is in the interest of the EU to ensure that refugees settle in Ethiopia rather than seek asylum in Europe.

Thus, the European diplomatic chiefs’ visit to Ethiopia has been necessitated by the fact that the crisis has its implications for Europe too and it is in the best interest of Europe to nip the evil in the bud.

With bringing China and USA on the same table, Zambia is playing a dangerous game