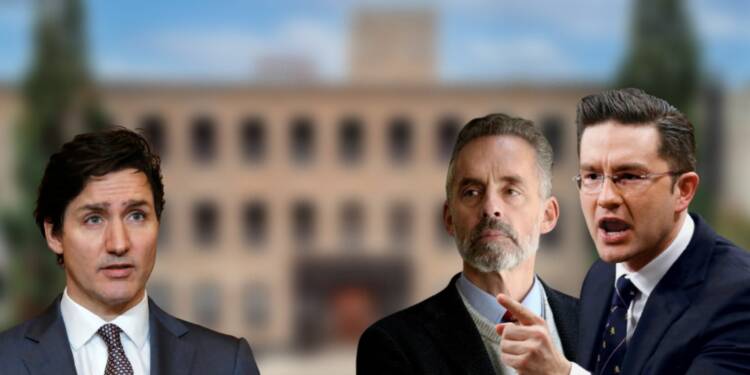 Canada has experienced new trends and experiments in its democratic structure by its very own Prime Minister, Justin Trudeau where freedom of speech is not so free for Canadians as noticed in Jordan Peterson’s case. A psychologist and author who is subjected to “re-schooling” for his comments on twitter against the government. Another voice is being heard from the leader of opposition in Canada, Pierre Poilievre who has schooled Trudeau over statesmanship.

Dr. Jordan Peterson stated that because he criticized Canadian Prime Minister Justin Trudeau, the College of Psychologists of Ontario (CPO) is threatening to revoke his license to practice psychology.

Canadian Conservative Party Leader Pierre Poilievre is defending clinical psychologist Jordan Peterson’s right to free speech, citing French freedom of speech advocate Voltaire from the 18th century. According to Poilievre, he supports free speech in Canada despite not necessarily agreeing with all of Peterson’s viewpoints. Following a number of complaints from individuals who do not like Peterson’s online posts, including a retweet of a Poilievre post and a criticism of Prime Minister Justin Trudeau, the Ontario College of Psychologists informed Peterson that he must either undergo retraining for social media etiquette or lose his license. Poilievre’s remarks follow the Ontario College of Psychologists’ announcement.

One of Liberal Leader Justin Trudeau’s top priorities is to control how Canadians interact online. Additionally, it directly jeopardizes this nation’s right to free speech. Instead of focusing on protecting Canadians, the government was introducing Bill C-10, an act to amend the Broadcasting Act, during the second wave of the pandemic. Again, it sounded fairly harmless. The government will eventually realize that a lot of unsavory speech is posted on websites that are out of Canada’s control.

Pierre Poilievre in his video also mentioned the “cancel culture” and the woke culture criticising them for degrading Canada’s society. When the loudest propagandists of the “Cancel Culture” have reduced themselves to defending whitewashed Canadian symbolism—whether it be inanimate objects or the names of places—while the nation mourns actual human rights abuses and deaths, it is difficult to take the “Cancel Culture” seriously. Free speech is cherished in democracies because it is necessary for their operation.

Constitutional safeguards uphold a wide range of speech in liberal democracies like Canada and the United States. However, canceled culture restricts speech at its worst. It puts this long-held fundamental freedom in jeopardy. Other pillars of society are at risk if we silence those with whom we disagree.

Pierre Poilievre in his video also thrashed Trudeau indirectly for suppressing the opposing voices. In his video he mentioned that free speech is only free when there are disagreements and people are free to express their disagreements. If all people agree on a particular thing, then there is no need of free speech.

Jordan Peterson has appealed to the Ontario Divisional Court stating that Ontario College of Psychologists is infringing upon Jordan Peterson’s charter rights to free expression.

Peterson stated in a podcast that, “We decided that the best way to challenge this would be in the courts on constitutional grounds,”

“I don’t trust the process at the college and no one should.” he added.

While Canada aims to uphold the freedom and rights of its citizens, the government is making efforts to pull the strings back. Jordan B Peterson’s case clearly reflects how not only ordinary citizens but also intellectuals are forced to support the liberal policies or face consequences. The increasing cancel culture and wokeism in Canada under Trudeau’s governance can cost Canada to a greater extent.