How did it come to be that silence regarding Anglo-European Canadians became the law of the land? 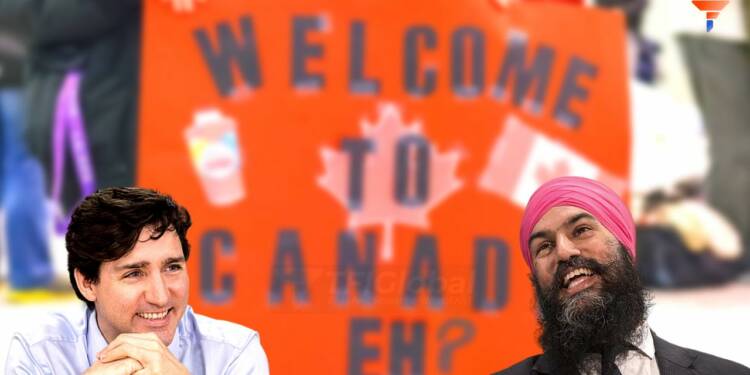 A new report from the National Opinion Centre has delivered a rarity among immigration-related communications in Canada. Among other vital statistics related to Canadian demography, the following statement speaks to the impact of immigration intake in Canada:

“The number of ridings in which visible minorities form a majority of the population has increased from one in ten (33) in 2011 to close to one in six (51), reflecting high and increasing levels of immigration.”

While the report details exponential growth in “racialized” citizenship, it remains devoid of a critical truism: the impact of our Liberal government’s immigration policy on Anglo-European communities of Canada.

Simply put, it’s like we don’t exist. Perhaps, one day, the concept will come to fruition. It well appears that no matter what transpires within the world of Canadian demography, government and media are loath to reference our rapidly shrinking Anglophone communities.

How did it come to be that silence regarding Anglo-European Canadians became the law of the land? Why have these communities transitioned to a silent majority? Government won’t speak of us. Media certainly won’t, nor will the so-called “experts” in our academic institutions.

We hear plenty from our controlling institutions about racism against minority communities. Absurdist terminology such as “majority minority” is today a social standard. “Islamophobia” colours the content of press presentations on a daily basis. Sikhism, Chinese, LGBT– all are infused within the vernacular of the day.

In stark contrast comes the silence surrounding white Canadians. Are we to go “gentle into that good night” of community erosion without so much as a peep within our pluralist society?

More than any element, it is this perpetual silence which concerns us. Simply put, no one talks about us– an ominous condition when considered from an historical context.

In the year 2023, 51 of 338 federal political ridings in Canada are minority white. There– we said it. No one else will, and in fact, doing so is a sure-fire way of being censored on the internet.

Why is it so difficult to invert the presentation, and inform Canadians of this vital truth? For what reason is it taboo to speak the name of our communities? PM Justin Trudeau has never done so. Over seven years in office, and Canada’s woke globalist practitioner has yet to utter the word “Anglophone.” And you can be sure he never will.

Again with the ridiculous terminology. We learn that these communities are younger than their “Old Stock” counterparts. We understand that Islam is on the rise. We should know that Anglo-European birth-rates have tanked in totality, while 3rd World migrant birth-rates are double that of “traditional” Canadians.

But in fact, we don’t know anything– because this data is not fit for print within Canada’s monolithic media bubble.

Speaking of obfuscation in the press, here’s one good reason why it exists:

In this, fellow patriots, we discover the future of our nation. Stated plainly, the Liberals-NDP rule the roost in terms of the “racialized” vote. Conversely, whites vote for the Conservatives.

Translation: the more immigrants, the greater the percentage of federal ridings that fall into Liberal hands. To facilitate, jam-pack as many ridings as possible with new arrivals. Talk about killing two birds with one stone.

The Goal Of The Liberal Government Of Canada

It is two-fold. First, utilise immigration to transfer white Canadians to a minority community. Next, by way of immigration policy, transition all currently-held Conservative ridings to the Liberal Party.

Upon which we move to the most taboo topic in Canada: the future of our nation. Media won’t allude to it, but the outcome is blatantly obvious. If in the year 2038 the Liberals control 90% of federal ridings, what is the point of holding federal elections?

There is no point. Bingo– our nation transitions to a non-democratic country.

Translation: game over, Euro-Canadians, Conservative Party, as well as the institution of democracy itself.

This, friends, is PM Justin Trudeau’s “no core identity” Canada. Ridding the nation of its core, the Liberal government paved the way for the end of freedom and democracy in the dying Great White North.