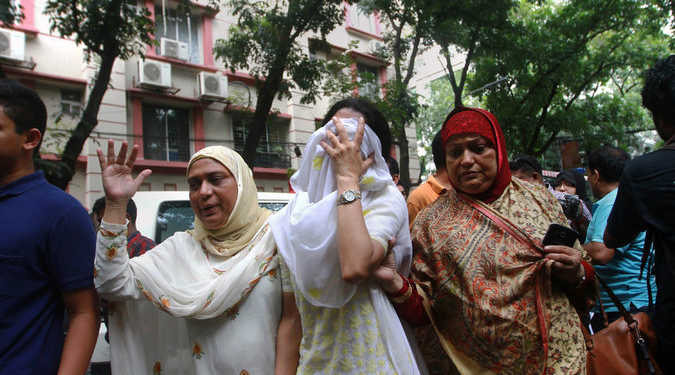 On 1st July 2016, seven armed jihadis stormed into the Holey Artisan bakery in the upmarket Gulshan area of Dhaka, taking more than 30 people hostage. In a throwback to the Nairobi’s Westgate shopping mall siege of 2013 by Al Shabaab militants, only the ones who could recite Koran verses were spared. The rest were tortured brutally and butchered with machetes (not shot, because of the religious duty to kill kafirs by slitting the throat). The jihadis held the security forces for more than 12 hours, and when finally the siege ended, six of the seven jihadis lay dead, along with nine Italians, two Bangaldeshi origin Americans, seven Japanese, one Indian and two Dhaka policemen. The seventh jihadi is being interrogated. ISIS claimed responsibility of the attack, and the perpetrators of it were all Bangladeshi nationals of Jamyetul Mujahideen Bangladesh.

That group has been banned for more than a decade in Bangladesh, but its ties to ISIS are known. All the seven jihadis were from affluent families, with a good educational background, none from a madrassa. ISIS posted the pictures of five of them online stating “Let the crusader countries know that there is no safety for them as long as their aircraft are killing Muslims”. This looks to be aimed at US and Britain bombing Syria and Iraq, but how is Italy and Japan or even India involved in this? The Italian victims were understood to be fashion houses employees buying fabric from Bangladesh, the Japanese ones from NGOS. So, effectively the country’s economy can be dealt a huge blow if home-grown terror is not kept in check.
Bangladesh PM Shaikh Haseena remarked what kind of Muslims are these who kill innocents during Ramzaan (So is it ok to kill them after Ramzan, as per verse 9:5?) And lets not even talk about “These terrorists were not Muslims, terror has no religion” from news traders, overrated intellectuals, celebrities or leaders. This reaction is not just shameless, it’s infuriating.

There is nothing surprising about an attack of this kind taking place in Dhaka. It was long due. For quite some time now, Bangladesh has been a growing hotbed of Islamic terror. Rape and murder of the Hindu minority is daily news there. An untold number of secular bloggers, dissidents and even LGBT activists have been butchered in broad daylight, and the toll has increased in the last two years. Bangladesh might have been separated from Pakistan in 1971, but its foolishness to believe that it has no fertile ground for jihad. Already, it is a strong base for Pakistan’s ISI, a safe haven for separatist outfits like ULFA and NSCN factions, and now a rising IS base. Why do we forget that the idea of Pakistan did not originate in Lahore or Karachi, but in the likes of Dhaka, Aligadh and Kolkata. Muslim League’s bulk votes and leaders/cadre came from central provinces and undivided Bengal.

An old interview published in ISIS ‘s online propaganda site Dabiq, has surfaced, for which India should be concerned. Shaykh Abu Ibrahim al-Hanif, the ‘Amir of Khilafah’s soldiers in Bengal’ in an interview to the magazine elaborated upon the group’s plans. In unambiguous terms, he mentioned how Bangladesh would be used by the group to launch raids into India from the eastern periphery. This move would be timed with attacks launched from the ‘Wilayat Khurasan located on India’s western side’. “Thus having a strong jihad base in Bengal will facilitate performing guerrilla attacks inside India simultaneously from both sides,” it was mentioned. The eventual plan it was said was to launch conventional army raid to ‘liberate the region’ after first getting rid of the ‘Pakistani and Afghani regimes’. The jihad in Bengal was also a ‘stepping-stone for jihad in Burma’. The uncontrolled Bangladeshi infiltration in north eastern India is a life threatening problem, not addressed due to vote bank or plain apathy. When you add the growing threat of jihad to it, you have a ticking time bomb at hand.

Bangladeshi infiltration has changed the demography of many areas in India, especially in states like Assam. East Bengal’s attraction for goes back more than a century. Even during the proposed partition of Bengal in 1905, the Muslim League had demanded Bang-e-Islam, on the targets of which was to flood sparsely populated Assam with Bengali Muslims. During the second world war, Md. Sadaudaula the then premier of Assam, gave a big impetus to this infiltration.

Mujib ur Rehman, the former Muslim league gangster who became the first prime minister of Bangladesh and who is the “secular” doyen according to the secular intelligentsia, had always coveted the mineral rich wealth of Assam (“Eastern Pakistan must include Assam to be financially and economically strong.”). He had remarked that very slowly, but surely the Bengali Muslims through the demographic growth would overwhelm Assam one day. He would be pleased to know had he been alive today that successive secular governments (you know which party) in India have not only aided the infiltration, but also given citizenship to the infiltrators.

Dev Kant Barua (one who said India is Indira and Indira is India) had famously remarked that the party would be in power as long as the Alis (Bangladeshi migrants) and Coolies (tea garden labourers) are there. Even in Manipur, Mizoram, Meghalaya, Arunachal Pradesh and Tripura the Bangladeshis have changed the demographics alarmingly. ISIS will be rubbing its hands with glee when it finds out that it needs to spend little in men and material to create a launchpad to the east of India for Ghazwa e Hind, and to carve out a third islamic nation from the easternmost part of India when the time is ripe.

The number of people being recruited for ISIS from countries like India, Britain, France, Pakistan, Bangladesh has grown dangerously, and none of them are poor or illiterate or unemployed as the liberal bleeding hearts tell us (sorry Malala), but from relatively affluent backgrounds.

Our intelligence agencies have to be commended for tracking all these cases meticulously, but even one recruit that escapes the radar can spell disaster, because any terrorist attack in a crowded city in India will result in atleast a hundred casualties before the security forces can respond.

And the terrorists are now targeting the affluent and middle class, because they are the soft spot, sheltered, easily rattled by violence, and willing to bend to any extent to keep the status quo. Paris attacks, Brussels and Istanbul bombing and now this. And it wont get any easier. Two of the brutally butchered people in Dhaka were two young Bangladeshi origin students studying in USA. It did not matter to the terrorists that they were Muslims, all that mattered was that they had gone ‘’astray’’ and had to be killed. If jihadis can do this to their own children, imagine what will it do to yours.

The revival of jihad machinery via petrodollars which started during CIA’s funding of Afghan mujahideen has grown into a huge monster, and it wants to swallow everything in its path. Its no longer confined to the rocky hills of Afghanistan or gullies of Karachi and no longer are the have nots its only victims. It can hit you as hard in your gated communities, or while you are enjoying your dom perignon in a swanky restaurant.

Stop whitewashing the crimes of barbarians just because it serves your purpose or just because you think you are way beyond the reach of the violence. You are now, but you soon won’t be. Calling all Muslims as terrorists is as immature as it is short sighted. It is true that its just a small minority among them which is doing it, but that small minority is huge enough to destroy our way of life irrevocably. And the deafening silence of the majority of Muslims makes it more lethal, who fail to understand that they will be its first victims, just as Muslims themselves were mutilated or killed for diverting from Shariah during Taliban rule and now in ISIS ruled areas.

All right, I’m off now to memorise some Quran verses in English. After all, I want to make sure that my next meal in a restaurant isn’t my last.