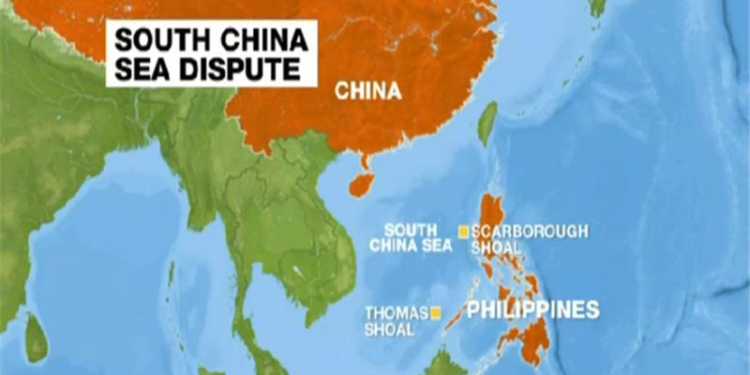 South China Sea has grabbed all the major international headlines this week. One of world’s busiest waterways, it may soon be added to the list of global flashpoints. The claims of a belligerent China are being strongly countered by a host of nations bordering the water body, threatening the fragile peace that has held in this part of the world for decades. Given that the waterway is an international trade route, the conflict over South China Sea threatens to spill over into a major international crisis. The Americans for years have refuted China’s claims and have pushed for freedom of navigation across the Sea, while smaller nations such as Philippines, Vietnam and others have decided to stand up to China to refute its claim over the water body. The sea in itself is unremarkable, dotted as it is with uninhabited atolls and small islets. However, geologists believe that it holds solid reserves of oil and gas, adding an economic angle to what was mostly a territorial claim. Adding another level of complexity is international affairs. The sea is surrounded by China and other nations, most of which are not exactly China’s best friends. Unless handled delicately, South China Sea dispute has the potential to ignite wars on a gigantic scale.

What is the South China Sea issue?

South China Sea borders China, Taiwan, Vietnam, Philippines, Malaysia and Brunei. All parties in the dispute have competing claims on how the sea should be demarcated. As per UNCLOS (UN convention on the law of the sea), to which China, significantly, is a signatory, a territory of 200 nautical miles from the coast serve as the exclusive economic zone of a coastal nation. That in itself negates China’s claim over the entire South China Sea. However, long before the UNCLOS came into being, China had claimed significant portions of the South China Sea as per its nine-dash line, way back in 1947. As the name indicates, the nine dash line is vague and China has never formally filed a definite claim to the area within the dashes.

The area under dispute in the South China Sea includes Spratly islands, Scarborough shoal, Paracel Islands and other uninhabited atolls and coral islands. These were claimed by the pre-communist government of China at the end of WWII. However, at the time of signing of the peace treaty with Japan at the San Francisco Conference, both China and Vietnam made a claim to the islands. The Philippines also made a claim to some of the islands later. Over the succeeding decades, China made numerous attempts to enforce its claims over the islands. For instance, the Chinese seized the Paracel Islands from Vietnam in 1974, killing more than 70 Vietnamese troops. The two sides clashed again in 1988, with Vietnam losing around 60 sailors. In 2012, Philippines and China sparred over the Scarborough Shoal, with China gaining control. In 2014, Vietnamese violently agitated against Chinese attempts to begin drilling in the disputed Paracel Islands. The agitations soon blew up into anti-Chinese riots in Vietnam. Since 2014, China has aggressively begun militarizing the islands under its control. It has built several artificial islands and is actively engaged in building runways and ports.

China’s claim stems from historical reason as summarized in its nine-dash line. The earliest of these formal claims comes from a document dated 1935, titled, Map of Chinese Islands in the South China Sea. The original eleven-dash line was subsequently modified to a 9-dash line, which has recently been expanded to a 10-dash line to cement China’s claims over Taiwan. China has aggressively sought to implement its claims, thereby presenting a fait accompli to the international community. As a part of its strategy, China also loudly denounced an Indo-Vietnamese deal on oil exploration in certain blocks of the South China Sea in 2011.

Philippines’ Claims stem from the fact that many of the disputed islands are only a stone’s throw distance away from Philippines. Several official Philippine maps published by Spain and United States in 18th and 20th centuries show Scarborough Shoal, one of the contested islets as Philippine territory. Philippines is also concerned at the rise of Chinese belligerence, believing it to be a threat to its sovereignty and independence. In fact, it was Philippines that went to the international tribunal to seek verdict on the legitimacy of Chinese claims in the South China Sea. Also, Philippines is reluctant to settle the issue bilaterally with China, given China’s massive economic and military clout.

Vietnam claims that it has been in possession of Spratly and Paracel Islands since the 17th century. It has also highlighted ancient Chinese texts that show that the disputed territories have historically been non-Chinese. The Cairo declaration, drafted by China and the allies at the end of WWII listed the territories that would be restored to China after Japan’s defeat. The list did not include the Spratly islands. Similarly, the San Francisco treaty did not mention Spratlys or other islands to be returned to China. When Vietnam was partitioned, South Vietnam exercised soverignty over the islands in line with the Geneva accords. The islands have historically been inhabited by the Hindu and Muslim Cham minority of Vietnam. However, the government of Vietnam is wary of establishing this connect as it is actively engaged in decimating its Cham minority.

US itself is not a signatory to the UNCLOS, but has accepted parts of it as customary international law. Successive US governments have acted in ways to deflate China’s claims in the disputed territory. US has pledged American support to the Philippines in its territorial conflicts with China. US has also indulged in Freedom of Navigation operations in the South China Sea as a way of actively challenging China’s claims. US’s strategic interest lies in standing up to the Chinese as many of its allies are directly/indirectly embroiled in the South China Sea dispute.

What it means for India?

Any geopolitical situation that puts China in a quandary may seem to be an obvious advantage to India. However, India must tread carefully on an issue where it is not directly involved. As Dr. Subramanian Swamy tweeted, “The ruling against China by a UN Tribunal over South China sea islands must be cautiously assessed. Tomorrow such a Tribunal can sit on J&K”. That having been said, India will need to support its regional allies such as Vietnam in the face of Chinese aggression. India will need to use its stand on the South China Sea dispute as a lever to get strategic concessions from China, viz. China-Pakistan Economic corridor which passes through de jure Indian Territory, UN/NSG membership border settlement etc. But as India and US’s strategic interests increasingly overlap, India will be more likely to take a stand which will not endear it to China.

With the international tribunal’s recent verdict against China, one should expect the Chinese to display their characteristic bluster, exemplified by their recent comments where Chinese state media has referred to Japan and the US as eunuchs. These pronouncements should not be given weight beyond what they really are worth. While the decisions of the tribunal are non-enforceable, US and its allies should try and make it pertinent that they intend to implement the tribunal’s judgement. That alone will force China to come to the negotiating table. The ASEAN bloc should try and settle its disputes with China as a single entity which will help it tackle China’s disproportionate clout. That alone seems the way forward to resolve this knotty dispute.

Welcome to Germany dear Terrorists, You can shoot us now