Welcome to Germany dear Terrorists, You can shoot us now 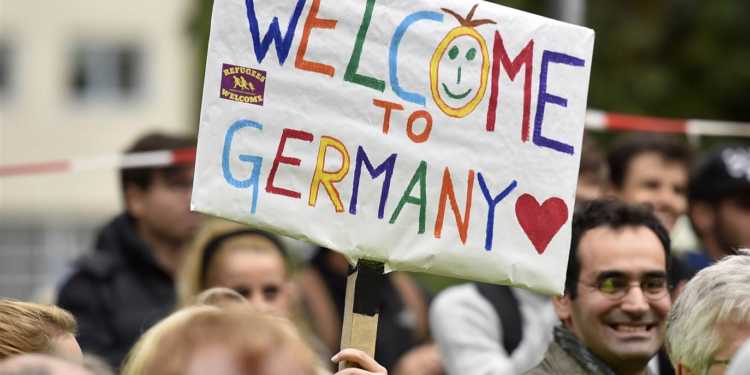 On 18th July, Germany witnessed an Islamic terror attack. A 17 year old boy-Riaz Khan Ahmadzai-shouted “Allahu Akhbar” and went on a stabbing rampage inside a train near Bavaria’s Würzburg city. Reports suggest that he used an ax and knife to attack people and was shot dead by cops. More than twenty passengers were injured (including two critically injured) in the attack. Local police have found a video featuring Khan’s confession about his plan to carry out the attack as well as his affiliation with the Islamic State.

“I will kill you in your own house, I am Islamic State’s soldier and I am here in Germany on a holy mission,”-said Khan in the video that police found. Reports suggest that he wanted to seek revenge against nonbelievers. There is still a lot of confusion about his nationality. He claimed to be from Afghanistan in his documents submitted to Government. But, after the terror attack, police raided his room and came across IS flag along with some other documents suggesting that he was from Pakistan! Surprisingly, he was also receiving pocket money (meant for refugees) from German state.

While the country was just recovering from this terror attack, it received another shock on 22nd July.

Individual named Ali David Sonboly (18-year-old young man) went on a shooting spree inside Olympia shopping centre in Munich. Nine people were killed during this attack. Authorities have not found any evidence to suggest that this German-Iranian man had any links with Islamic terror groups, and are currently offering a (possibly fake) sugarcoated, repetitive narrative about the incident, like true libtards.

Germany’s international broadcaster DW has made several documentaries that focus on life of Pakistani and Bangladeshi illegal migrants living in Germany. Channel claims these people are “refugees.”

Few minutes of internet research would help you understand that “refugee’ means an individual who has left his country due to natural disaster, war, or to escape persecution. Are Pakistan and Bangladesh facing any of the above-mentioned situations? The answer is clear-cut No! Even Afghanistan does not witness much of violence compared to its condition in last decade. Then, why is Germany allowing morons from these countries to enter the nation? Why are they tagged as refugees instead of calling them illegal immigrants? These illegal immigrants have confessed in DW’s documentaries that they have entered Germany illegally.

Germany got a taste of its own liberal medicine for the first time in January this year when more than 80 women were assaulted in various parts of Cologne and Hamburg. Some of them were also raped as per reports. Police investigation clearly indicated that attacks were carried out by young men of African and Arab origin (Muslims, to say it in one word). Believe it or not, even a policewoman was sexually molested. Later, investigations revealed that New Year’s Eve attacks were preplanned with a clear intention to target women. Germany’s libtard journalists managed to cover up these incidents. Their reports focused more on inconvenience faced by illegal immigrants instead of highlighting crimes committed by these dacoits. Germany’s own DW-TV also did the same.

This mob violence reminded me about our own Mumbai Azad Maidaan Riots (2012) involving a mob of Muslims. This mob destroyed property worth crores and also molested women cops from Mumbai police. Under pressure from super-secular Congress-NCP Government, Mumbai police even suspended their own female cop who wrote her opinion about the incident in the form of a poem.

Getting back to the topic, according to estimate, around 1.2 million refugees are living in Germany. Welcoming Syrian refugees sounds logical. However, due to lack of proper documentation and verification, German migration system also ends up welcoming economic migrants from Middle Eastern countries, African nations, and from Asia as well. At present, there are many Afghans, Pakistanis, Bangladeshi and Africans who are living in Germany as “Syrians.” They are getting pocket money from German Government.

May it be the UK, the UAE, or the US, no matter where they stay; many Pakistani citizens earn a reputation of being notorious, criminal minded and even terrorists!

As Sue Reid has pointed out in her DM column, Germans welcomed people claiming to be refugees with songs and balloons. Now, they are facing total chaos and fuming in anger because of Merkel and her liberal ways.

In February this year, Germany’s intelligence agency head-Hans Georg Maassen-had warned that Islamic State’s terrorists may enter the country as a part of a group of migrants. He had also stressed on the point that terror attack risk was high during this year. It seems his warnings were ignored. Germany needs to rethink about how it plans to keep on feeding dacoits from Pakistan and Bangladesh on taxpayers’ money.

Anyway, comments left on most of the news stories related to Khan and Ali’s attacks suggest that Germans have become smarter. Perhaps, they are slowly realizing that they have to pay a huge price for Angela Merkel’s mistake.

What the Turkish Coup Can tell us about India’s Energy Futures?