[Watch] Obama got Hugs for Modi, Snub for Jinping 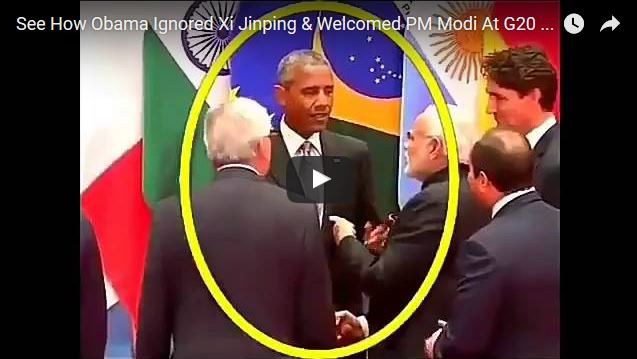 The G20 founded in 1999, is the global forum for governments and central bank governors from 20 major economies of the world. It aims to study, review, and promote high-level debate of policy issues relating to the international financial stability and It pursues to address matters that go outside the accountabilities of any one government or organization. The current list of G20 includes – Argentina, Australia, Brazil, Canada, China, France, Germany, India, Indonesia, Italy, Japan, South Korea, Mexico, Russia, Saudi Arabia, South Africa, Turkey, the United Kingdom and the United States and the European Union (EU).

The latest edition of the G20 summit took place in the Chinese city of Hangzhou this weekend. It witnessed the attendance of high profile leaders of all countries including US President Barack Obama, Russian President Vladimir Putin, German Chancellor Angela Merkel, the host Chinese Premiere Xi Jinping and the Indian Prime Minister Narendra Modi among others. When so many high profile leaders congregate at a common venue, it becomes the perfect destination for some amazing photos, warm hugs and cold shoulders.

Narendra Modi has brought an ‘embracing ‘change in the otherwise formal handshake custom among world leaders.

Here is a video from the G20 World summit which shows US President Obama avoiding Xi Jinping like a bitter ex and embracing PM Modi.

Watch this hilarious video that is going viral:

Although this is just a small clip from a 2 day event but it certainly points at the changing dynamics of world politics. Barack Obama was made to disembark from his plane through a small metal stairway instead of the customary red-carpet stairway that visiting state leaders are typically given. Obama kind of made up for it with that cold shoulder to Jinping but his closeness with Modi must have caused a lot of burn.

China’s power is overrated and Chinese culture is a myth