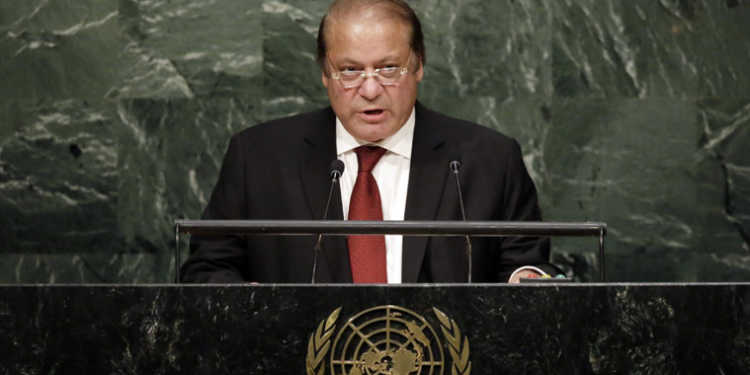 First, let me congratulate Nawaz Sharif for many of us heard one Pakistani talking in English for more than fifteen minutes. This speech of Nawaz Sharif would go down in the annals of the history of Pakistan if not for anything else, for this one reason.

The opening statement: Today, three decades after the end of the Cold War, our multi polar world is more free and vibrant, yet still chaotic and turbulent; more interdependent, but more unequal; more prosperous, yet still afflicted with poverty.

Meaning: I don’t consider the world being a uni-polar one for offending that Jinping guy. The remaining sentence is full of contradictions indicating how rest of my speech would be.

Statement: The momentum there towards “greater union” has already reversed. Barricades and walls are going up, especially against the tide of misery flowing out of a turbulent Middle East. In many countries, intolerance has revived the ghosts of xenophobia and Islamophobia.

Meaning: Well, it is an absurd comment for a head of state that was carved out of a “greater union” that India was before Pakistan was carved out. Hafiz miya told me I need not worry about the atrocities being committed in the name of religion by fellow Islamic states, which caused the migration in the first place.

Meaning: Well, this is an invitation to the Daesh commanders to come and take control of Pakistan from the other Sharif, read Raheel. May my request be granted by the almighty! Perhaps the almighty created Daesh for this specific purpose.

Statement: “We have fully integrated the 2030 Development Agenda into our own economic and social strategy. This rests on our conviction that people are the true wealth of our nation and that it is human development, which will determine our future destiny”.

Meaning: A plan for increasing human resources is enforced by polygamy. And the human resources created by the hard work done over many nights would be trained by the ‘Professor Emeritus’ Hafiz Sayeed and others of his ilk to become ‘devoted martyrs’ who could sacrifice their lives for one thousand rupees or a kilogram of Almonds so that their family can survive.

Statement: “Pakistan’s Zarb-e-Azb Operation is the largest, most robust and most successful anti-terrorism campaign anywhere in the world, deploying 200,000 of our security forces”.

Meaning: 200,000 army personnel are actively involved in killing Balochs, Sindhis and anyone who talks sense – for practice so that they can fight with India with same vigor, as and when there would be a war with India.

Statement: “After 15 years of the current war in Afghanistan, the international community agrees that the only road to a lasting peace in that country is through a dialogue between the Government in Kabul and the Afghan Taliban. Pakistan has long proposed this as the most viable course to end decades of conflict and suffering in Afghanistan.”

Meaning: Well, we could stall the peace process by reiterating this shit of talking to Taliban and the mighty Americans could do nothing but increasing financial aid to us. Realize the ‘nuisance value’ of Pakistan and provide us with some more aid – in the name of almighty.

Statement: “Over three and a half decades of conflict and chaos in Afghanistan has had grave security and economic consequences for Pakistan. Almost three million Afghan refugees, to whom we opened our homes and hearts, remain in Pakistan. We hope to see them return to Afghanistan, voluntarily and with dignity.”

Meaning: All three million Afghans were fully trained and are now ready to be deployed as ‘fidayeen’, mujahedeen’ or ‘jihadi’. Once they decimate Afghan from within, Daesh may take control of Afghanistan along with Pakistan. (Hope by that time, I live in exile)

Statement: Pakistan wants peace with India. I have gone the extra mile to achieve this, repeatedly offering a dialogue to address all outstanding issues

Meaning: Every week ‘peacefools’ from Pakistan go many extra miles into India in search of peace.

Statement: Let us be clear; talks are no favor to Pakistan

Meaning: We never wanted to talk in the first place.

Statement: Our predictions have now been confirmed by events.

Meaning: When I go into exile, I can become an astrologer

Statement: Burhan Wani, the young leader murdered by Indian forces, has emerged as the symbol of the latest Kashmiri Intifada

Meaning: Indians have not mastered the art of disposing bodies. They should visit Rawalpindi to learn such techniques, for we are experts in making people ‘disappear’ in Balochistan. Deep from my heart I thank Burkha and other Indian Libtards for providing us with such a strong support.

Statement: Pakistan fully supports the demand of the Kashmiri people for self-determination, as promised to them by several Security Council resolutions

Meaning: Okay, this is non-sense, for initially Pakistan refused plebiscite fearing Kashmiris might want to be with India. Even now, plebiscite can’t happen because our army would not vacate it. Yet, this statement would be the most sensible part of my speech.

Statement: On behalf of the Kashmiri people; on behalf of the mothers, wives, sisters, and fathers of the innocent Kashmiri children, women and men who have been killed, blinded and injured; on behalf of the Pakistani nation, I demand an independent inquiry into the extra-judicial killings, and a UN fact finding mission to investigate brutalities perpetrated by the Indian occupying forces, so that those guilty of these atrocities are punished

Meaning: Only Kashmiris living in India are humans. If they live in Pakistan side of LoC, they are not. Same with Balochs, Sindhis and Muhajjirs or whoever simply is not a Punjabi Muslim. Mashallah

Statement: For its part, Pakistan is committed to the establishment of strategic stability in the region. It neither wants, nor is it engaged in an arms race with India. But we cannot ignore our neighbor’s unprecedented arms build-up and will take whatever measures are necessary to maintain credible deterrence.

Meaning: To improve strategic stability we gifted some of the occupied land to China through which they are going to build a road. We made many small nuclear weapons and already deployed them at the border. In case of war, in line with the ‘jihadist’ doctrine we will use these to decimate few cities of India. Well, India may use bigger weapons and kill all Pakistanis. So what, we were ready to be martyred in the name of the truthful. Even the almighty would be confused how to supply so many virgins to the entire population of Pakistan.

Statement: As a responsible nuclear weapon state, Pakistan will continue to cooperate with all international efforts that seek to promote fair and equitable solutions to disarmament and non-proliferation challenges. Pakistan is fully eligible for membership of the Nuclear Suppliers’ Group.

Meaning: Hehehe, I was just joking. Only to poke the old Qadar, who stole weapons from here and there. And who cares membership in any of these groups? We’ve China backing us.

Statement: The UN must regain its credibility as the central instrument for the promotion of peace, prosperity and liberty.

Statement: Pakistan has a vital stake in ending conflicts, fostering peace, fighting terrorism, strengthening democracy, promoting human rights, generating global growth and overcoming the challenges of environmental degradation. We can achieve these goals, and create a new and peaceful world order, only through the UN and by strict adherence to the principles of its Charter.

Meaning: Even I don’t understand meaning of such a long sentence. Reading this speech itself is a sentence to me. It may sound something like ‘All is well, that ends well.’

Meaning: I mean not the presiding officer of the UN session, but the American President. Allah ke Naam Pe Kuch De De re Baba