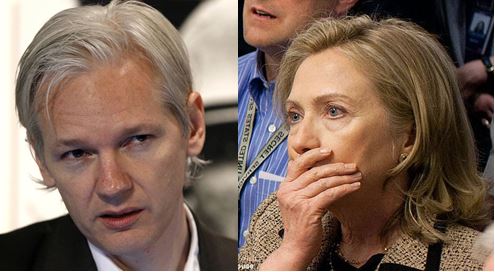 The latest Wikileaks releases, the Podesta email leaks, have revealed what we have always known about Hillary Clinton. She is a career politician more than willing to serve and protect the interests of Wall Street over those of ordinary Americans to ensure her hold over power. The past nine days have been devastating for the Clinton Campaign, or rather would have been, had the entire media not been in their pocket.

Meanwhile, it seems extremely likely that the Clinton Campaign has resorted to manufacturing allegations of sexual assault against Donald Trump to deflect attention from the Wikileaks releases.

The leaked emails reveal that Hillary Clinton dreams of a hemispheric Open Border and Open Market. It is in perfect alignment with the ambitions of one of her major donors, George Soros. George Soros, whose words and actions paint him as a diabolical personality, funds migration activities through his Open Society Foundation. Prime Minister of Hungary, Viktor Orban had accused George Soros of trying to undermine the nation-state. Soros had then replied through an email to Bloomsberg Business which clearly spelled out his repulsion towards national borders. Mr. Soros had said, “His plan treats the protection of national borders as the objective and the refugees as an obstacle. Our plan treats the protection of refugees as the objective and national borders as the obstacle.” Hillary’s ‘dream’ of an Open Border might well be inspired from the ambitions of George Soros.

Under normal circumstances and without a media to continuously further the Democrat propaganda, the leaked emails detailing her private speeches to Wall Street and other business organizations would have completely demolished the Clinton Campaign. The emails reveal that Hillary Clinton admits she is out of touch and emphasizes on the need to have a ‘private and a public opinion’ on Policy. In one email, apparently by Clinton Campaign researcher, Tony Carrk sent to Podesta and other campaign operatives, the header says, “Clinton Talks about Holding Wall Street Accountable only for Political Reasons.” Hillary Clinton’s private speeches confirm that Bernie Sanders stands vindicated in his allegations of the Wall Street’s overarching influence over American Politics. There can hardly be any doubt anymore that Hillary Clinton is beholden to special interests and she does admit in an uncharacteristic bout of honesty, “It would be very difficult to run for president without raising a huge amount of money and without having other people supporting you because your opponent will have their supporters.” In another sporadic bout of honesty, she concedes that she cannot relate to ordinary Americans. “I’m kind of far removed,” she said, from the struggles of the middle class and “growing sense of anxiety and even anger in the country.”

In another explosive revelation, Hillary Clinton in 2014 states that Saudi Arabia and Qatar “are providing clandestine financial and logistic support to ISIL and other radical Sunni groups in the region.” In an unrelated event, Qatar had donated 1 million dollars as a ‘birthday gift’ to Bill Clinton for a 5 minute meeting in 2012. We would do well to remember that both Saudi Arabia and Qatar have donated millions of dollars to the Clinton Foundation. Qatar has donated somewhere between 1 million to 5 million dollars while Saudi Arabia has donated upwards of 25 million dollars to the Clinton Foundation.

Wikileaks also confirmed the extent of collusion between the media and the Clinton Campaign. It has only revealed what we all have known for a long time, that independent media is a myth. The emails prove that journalists covertly participated in the Clinton Campaign trying every possible move to cast Clinton in a favorable light. Mark Leibovich of the failing New York Times interviewed Hillary Clinton and then submitted the result to her staff for review. John Hardwood of CNBC/NYT regularly emailed Podesta offering political support and congratulating him on Hillary’s primary wins. In one email, he gloated over asking Donald Trump provocative questions during a Republican Presidential debate. But perhaps, his most damning indictment was the revelation which showed he conversed with Podesta to minimize the Clinton email scandal and the Clinton Foundation scandal. Louise Mensch of Heat Street went to the extent of reaching out to the Clinton Campaign and suggested ideas for creating ads that would help her gain favor solely on her gender. The worst offender perhaps was Donna Brazile who during her time as a CNN contributor leaked at least one question that was asked in the primary debate between Hillary Clinton and Bernie Sanders. If the collusion between the media and the Clinton Campaign wasn’t already evident from the disproportionate amount of attention that Donald Trump’s lewd remarks have received from the media compared to the absolutely bare minimum for the Podesta email leaks, it surely is now. And as a stamp of absolute guarantee that the media has sold itself out to the Clinton campaign, CNN (Clinton News Network) falsely told its viewers that it’s ILLEGAL for them to view the Podesta email leaks in a desperate to salvage Clinton’s credibility.

The Clinton Campaign has regularly attacked Donald Trump of employing divisive rhetoric to garner more votes and condemned his supporter base as being deplorable and irredeemable. However, the leaks revealed that the Clinton Campaign conspired to promote Donald Trump as they presumed he would be the easier candidate to beat in the Presidential elections. Furthermore, the leaks revealed that contrary to the Clinton Campaign’s claim of being inclusive, in 2008, they considered using Barack Obama’s Muslim background against him during the primaries. They also considered Obama’s support for gay adoption rights and Cocaine use as possible fronts for attack. Readers should also remember that the DNC leaks earlier this year revealed that the Clinton Campaign discussed attacking Bernie Sanders for his possible atheistic beliefs. The emails also show Podesta asking Hillary Clinton to recruit ‘Needy Latinos’ to help her with Hispanics. One should also remember the time Hillary Clinton called Blacks ‘Super predators’.

The leaks definitively reveal the hypocrisy underlying the Clinton Campaign. However, the most disgusting affair about this issue was John Podesta admitting that he wished the San Bernardino shooters were White. It is the single most revealing insight into the mindset of liberals who put Muslim appeasement and political mileage before national security.

The Wikileaks Podesta email releases also had plenty of food for the Conspiracy Theorists. One of the most intriguing emails that has surfaced discusses ‘Wetworks’ mere days before Associate Justice Scalia’s death. ‘Wetworks’ is an euphemism for assassination or murder. One would have likely dismissed this as a wild conspiracy theory if only mysterious deaths did not occur all too frequently around Hillary Clinton. And the fact that we do not have an independent investigative media anymore, just an Orwellian Ministry of Truth obfuscating truth and furthering government propaganda, only adds fuel to the fire.

Another series of emails show John Podesta discussing UFOs with one of his acquaintances about possible government knowledge about UFO crashes. John Podesta has been a longtime alien enthusiast and these revelations will encourage others who are convinced that the government is concealing information about the existence of aliens. Another particularly disturbing email by Bill Clinton NEA Chair reveals that they have “all been quite content to demean government, drop civics and in general conspire to produce an unaware and compliant citizenry.” One wonders if “dumbing down of the population” is an unavoidable consequence of democratic degeneracy or if it is a deliberate government conspiracy to ensure that the masses remain ignorant so that they remain compliant and the rule of the elites is not threatened? That I leave for the readers to judge.

The Clinton Campaign’s reaction to the Podesta email leaks have been nothing short of hysterical. Amidst tensions between the USA and Russia, the Clinton campaign has accused Russia of hacking into their mails and consequently, the USA has accused Russia of interfering with the US Presidential elections. However, Wikileaks has firmly stated that they have not revealed any of their sources and allegations of hacking and Russians assisting them is pure speculation. From a neutral point of view, the Clinton Campaign’s accusations against Russia seem to be borne more of panic than anything else. No credible evidence has emerged to suggest there’s any substance to Clinton Campaign’s allegations of Russian involvement. The allegations seem to be an excuse to deflect attention from the actual content of the leaks to its source to minimize the considerable damage they might inflict. The Clinton Campaign, however, has neither denied nor authenticated the content of the Podesta leaks yet. They seem to be more content by accusing Russia of hacking and focusing on allegations of sexual misconduct against Trump.

The Podesta Wikileaks release seems to be drumming itself up to a crescendo. The official Wikileaks account tweeted today, “Julian Assange’s internet link has been intentionally severed by a state party. We have activated the appropriate contingency plans.” With Trump gaining ground after the second debate and more damning Wikileaks releases only to be expected, things are looking extremely grim for the Clinton Campaign. And with every passing day, it seems more and more likely that between Donald Trump and Hillary Clinton, The Donald might indeed be the lesser evil.