The atrocities against Hindus in Bangladesh continue unabated 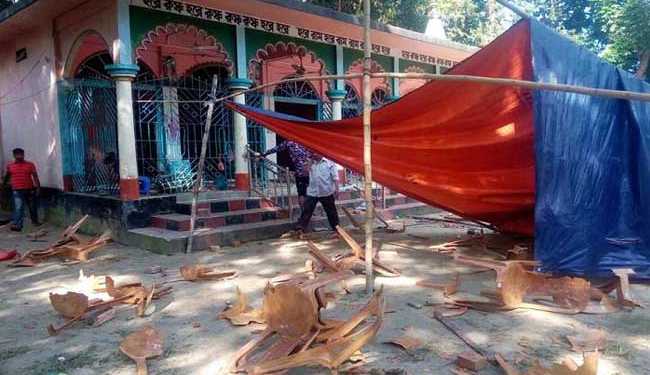 Bangladesh has witnessed a sharp spike in crimes against minorities in recent times and in what has become very repetitive over the years, Muslims in Bangladesh on Monday went on a rampage after a Hindu fisherman allegedly posted a photo on Facebook mocking one of the holy sites of Islam. According to reports, at least 15 Temples were vandalized and 200 Hindu houses burnt. In addition, 8 shops were razed to the ground and at least 150 people were injured as they tried to resist the onslaught.

The police arrested 9 people in response over the attacks and paramilitary border guards have been deployed to prevent further assaults. The rampage began after two Islamist groups had staged demonstrations demanding the arrest and execution of the Hindu fisherman for his post. Apparently, a group of hundred to hundred and fifty broke away from the group and went on a violent spree that caused considerable damage to the community of Hindus.

Destruction of idols, vandalization of Temples and violence against minorities isn’t exactly a new phenomenon in Muslim dominated societies. Extreme persecution of minorities has become largely characteristic of Muslim societies. As in Pakistan, even in Bangladesh, the Hindu minority population continues to suffer from vehement religious persecution and time and again fall prey to the morbid hatred of sections of the majority Muslim population.

Concerning it is that such organized violence against Hindus does not only occur in Bangladesh and Pakistan. Even in India, parts of West Bengal have regularly witnessed violence against Hindus in recent times which has largely been ignored by the mainstream media in India. In Kairana, where large scale migration of Hindu families became an unfortunate reality, the secular brigade came out in full force to whitewash the entire atrocity as a myth.

Quite unsurprisingly, the Hindu fisherman who allegedly posted the photo that led to the violence spree was also arrested by the Police for breach of internet laws. It once again shows that in countries with a majority Muslim population, the virtue of Freedom of Speech is a fantasy. It also displays the lack of mentality that is unwilling to protect Secularists and Freethinkers.

The pattern of organized violence against Hindus in Muslim dominated societies should be a wakeup call for Hindus in India. The situation in Bangladesh and Pakistan provides a glimpse of the future should Hindus forfeit their dominance in India when it comes to demography. Even in India, violence against Hindus is largely perpetuated in areas where members of the peaceful community have the demographic advantage. That they are a vote bank to the Secular parties only leads to political support for their organized violence.

The organized violence once again emphasizes the urgent need for Hindu communities in Muslim dominated areas to organize community defence drills to prepare for such contingencies. As I have argued in previous articles, personal security and dignity is not a privilege that can be outsourced to an impersonal entity such as the government. The pattern that has emerged beckons for Hindus to expect and anticipate such behavior and act accordingly so that their communities can be better protected.