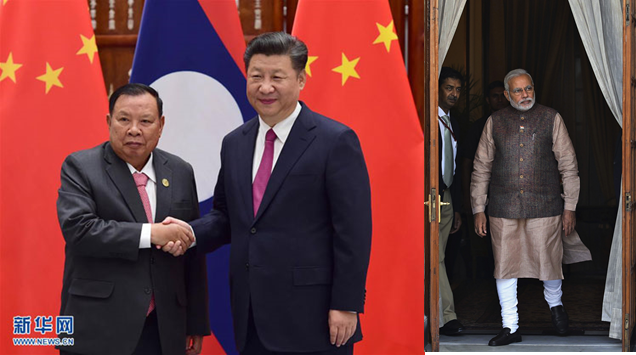 Porfirio Diaz, Mexico’s President during its prosperous yet violent Golden Age a hundred years ago, once lamented: ‘Poor Mexico, so far from God and so close to the Unites States.’

The same can be said for Laos- and all its neighbours.

The nation of Laos arose as a unified political unit in the 14th Century under the name of ‘Lan Xang’- or the Kingdom of a ‘Million Elephants’. Wars in the 18th Century between Laos and Thailand weakened the Kingdom and thus, as in case of India, the French took advantage and colonized the region. Centuries of brutal colonial rule and exploitation- coupled with a low population and lack of natural resources- mean that landlocked Laos remains undeveloped. When the French left, the Vietnam War followed- during which the Americans dropped an estimated 2.5 million tons of bombs on Laos. (Readers must note here that over the entire World War II, a total of merely 3.4 million tons were used by the Allies).

The Vietnamese victory meant that Laos got a Communist government as well- as well as closer links to Vietnam. Even now, Vietnam remains the largest trade partner of Laos and almost 1 million Laotians out of a total of 7 million have some form of Vietnamese descent.

This situation is changing.

Currently, China is fast becoming not only the largest trade partner of Laos but also the single most influential power in the country, displacing the Vietnamese. The Chinese plan is to make Laos the ‘Battery of Asia’- with construction of gigantic dams over the river Mekong as well as massive terraforming to feed China’s population in the future. What goes unsaid in this view is the simple fact that the Chinese can easily use these irrigation systems to simply ‘turn off’ the Mekong river basin- thus, transforming all of Cambodia, southern Vietnam, and eastern Thailand into a vast desert. (Readers can easily spot the parallels with India).

This is despite the fact that Laos, Thailand, Cambodia and Vietnam pledged in 1995 to “cooperate in the maintenance of flows on the mainstream…and to enable the acceptable natural reverse flow of the Tonle Sap (South-East Asia’s largest freshwater lake) to take place during the wet season.”

In addition, the Chinese have been investing in massive infrastructure projects across Laos- even at disadvantageous terms to themselves. This includes a $1.5 billion Railway project connecting Laos to China, funding by State-funded banks after the World Bank and other International banks pulled out of Laos in several cases due to Human Rights violations and environmental damage, as well as close links to several local politicians- many of whom are eschewing past Vietnamese links to new Chinese ones.

It does not take much imagination here to make out the grand strategy behind China’s actions.

80% of Laos’ population is involved in agriculture. China likely will try to use them to create a vast network of rice farms and fisheries to supply to China and sell to South-East Asia, creating a system of economically dependent Client States.

In China’s case, it is obvious that this will be used as leverage to threaten Vietnam- which has been trying to maintain control of its rightful territories in South China Sea. In addition, growing pro-China sentiment in Laos can only lead to damage to Laotian-Vietnamese relations which will affect the Vietnamese minorities in the country. The construction of the Mekong-Loei-Chi-Mun project by the Thai, partly as a response to Chinese actions on the Mekong, can only led to further strife and social conflict.

Earlier this year, former Malaysian leader, Mahathir Muhammad had warned very frankly, “Can ASEAN go to war with China? We are dealing with a very powerful country. We can’t tell them ‘look, don’t do this, don’t do that, or I will bash your head… It’s going to be the most powerful country in this world, more powerful than the U.S.’

And ASEAN has been backing down. In November, 2015, ASEAN defence ministers failed to release a communique from their meeting amid reports of Chinese opposition to language on the disputes. There was a similar failure at Cambodia in 2012. Chinese ships are, nowadays, routinely spotted off the Malaysian coast- and yet, the official response remains weak. The Filipinos have taken a very isolationist view under new President Duterte- titling towards China from their earlier pro-West stance.

Additionally- given Trump’s public proclamations of an isolationist policy will spur further Chinese aggression. The non-ratification of TPP alone will put a serious dent in the bargaining power of ASEAN states like Vietnam.

But what India is potentially staring at is almost total domination of all ASEAN by China. But unlike what many state- this will not mark a defacto return to the Age of Colonization where the most successful nations were those with the most and largest colonies. What this will mark is a potential return to the ‘Natural’ world Order- where Asian Superstates based in China and India- the Han, the Maurya, the Song, the Guptas, the Ming, the Mughals- dominated the World economy and military- taking up almost half of the World population and economy by themselves and fielding militaries hundreds of thousands strong.

China appears ready for this state of affairs. India?

As has often been seen, often it is the Indians themselves who are the most dismissive and defeatist- or amusingly enough, concerned about ‘moral conundrums’ presented by the prospect of an Indian Era of World History.

At this point of time, India is massively underequipped to deal with a China dominated ASEAN. In recent years, the NDA has been making overtures- as evidenced by the three visits India’s PM Modi has made to the ASEAN summits- the last one in Laos itself- as well as the ‘Act East’ Policy.

Cooperation with Japan and Vietnam is at its peak. Yet to a large extent, India’s past reactionism- as well as over 60 years of near-paralysis when it comes to South-East Asian policy- has meant that drastic measures would be necessary.

More than two thousand years, the idea of ‘Mandala’ was defined in political terms- a central political force, exerting its influence in all directions as the Sun shining upon the planets or a Chariot wheel turning on its axle. Thus, the image of a perfect Heaven was played out on a perfect Earth. When ‘Earthly’ or political power shrank or collapsed, so did the ‘Heavenly’ or cultural might get damaged.

This lead to the destruction of the chariot axle- thus, ‘Dukkha’ (literally, broken axle) – and the capture and slaughter of the warrior by his enemies.

The ‘first’ loss of South East Asia came about when the Chinese general Zheng He intentionally attacked Hindu temples and structures to break cultural and political links between Indian kingdoms and those in South-East Asia. The ‘second’ with the coming of the Europeans who laid waste to entire Continents and committed such cultural and demographic genocide that even now, certain nations- among them the foremost of which is India itself- have retained no respect for their own traditions and cultures. And with very step, with every defeat, the borders of not only the Greater India- States culturally dominated by India- but also Bharatavarsha- States politically united by India have continually, consistently, shrunk.

Let us hope the ‘third’, Laotian, shock does not turn out to be the last one India ever faces.