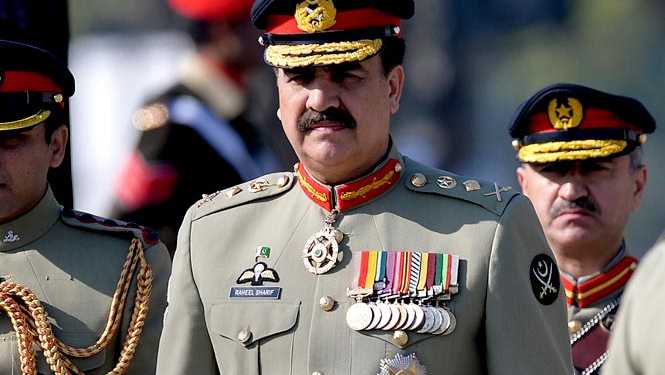 At the age of sixty years, if a person retires from the job of leading one of the biggest armies of earth, how he would plan to spend rest of his life?

Perhaps, by leading the nation. If the country is Pakistan, any army chief can kick out the civilian government. When the Prime Minister is Nawaz Sharif, who is already experienced in being kicked out, execution of coup is relatively easy. Still, the army chief has not overthrown the civilian government and is planning to retire at the end of his fix term of three years. If the country is not Pakistan and the retiring general is not Raheel Sharif, this is not news worth discussing. But Raheel Sharif, unlike his predecessors, is an intelligent man. So, it is naïve to expect him to fade away into the oblivion. His fading out from public life may only be temporary like the sun set, only to rise on the next day.

Maybe Raheel Sharif wanted to challenge Nawaz Sharif on his turf i.e., the civilian sphere of governance. If everything goes as per plan, Raheel Sharif would be entering the political domain and contest elections.

First, why did he not conduct a coup, the easiest of all options?

Perhaps, he realized the futility of the exercise. Smarting from the experiences of Musharraf while ruling the country and later, he planned his future career in a better way. And what better way to ensure a stable future than to become Head of State of Pakistan, through democratic process. Here is a military chief, whose image is better than the political leaders of the country, is opting not to go for a hostile takeover, nor seeking an extension to enjoy perks of the office he is now in, but toiling in the streets to establish a better Pakistan. Well, what more an ordinary citizen could want?

If one observes the career of Raheel Sharif from the time he took over reins of the army from Kayani, he groomed himself for this moment. He was the chosen guy of Nawaz Sharif, who overlooked seniors to Raheel while making him the Chief of Army Staff. Of course, the connection between both Sharifs belonging to Kashmir might have played some role. Maybe Nawaz didn’t want to create another Musharraf. Maybe that is the reason why Raheel Sharif didn’t overthrew Nawaz. In spite of all his successes and failures, Musharraf had become an outlaw, who had ran away from the courts of the country. Civilian political establishment pursues the cases so vehemently, Musharraf cannot live in peace, at least within the boundaries of Pakistan. Perhaps, this realization had warned Raheel Sharif to plan his future in a better way.

To be successful in Pakistan, any leader must have four virtues. Confidence of people of Pakistan, support from the Army and to be in the good books of America and China.

As a man who led the Army, Raheel enjoys the support of Army. Nearly after six months into his term, he launched the most decisive campaign against the militants centred in Waziristan. Operation Zarb-e-Azb against militia chiefly consisting Pushtuns had some effects. It brought him into the good books of America. Though Pakistanis have witnessed some respite in terror attacks, militants retorted by attacking school children in Peshawar and this attack only increased the vigour of Pakistani army and led to many more deaths of militants. His operation had established his image in Paksitanis as a person who could take decisions in the interests of common men, as majority of Pakistanis don’t consider Baloch, Pashtun as part of main stream, along with Muhajirs.

Raheel also maintained his political neutrality by acting not in the favour of either government or the opposition. All the while, he expresses his ‘displeasure’ on issues that are in public interest. Yet, it was only talk and no direct action; for he was adhering to the democratic principles of the country! Over time, he mastered the art of evoking right sentiments in ordinary Pakistanis by issuing statements against India, from time to time.

Raheel Sharif got closer to China, by ensuring support to the execution of CPEC. If CPEC completes in time, most of the credit would go to Raheel Sharif, for he placed two soldiers for one Chinese workman to prevent any threats from the Baloch. China can’t expect for more.

Finally, by the time he is ready to relinquish the post, he had already created a larger than life image in the minds of Pakistanis, and none batted an eyelid when posters appeared in Pakistan, urging him to contest general elections in 2018. By then, he would be 62 while the other Sharif, who is ruling Pakistan now would be 68. Though not too old, Nawaz may make way for Raheel. As such, with the demise of Benazir Bhutto, the opposition space is vacant in Pakistan. Bilawal Bhutto is almost like Rahul Gandhi and depends on others to larger extent. His father’s past is only a burden for his political career. With all his twists and turns, Imran Khan could never become a reliable leader. Battling many allegations about his family’s involvement in Panama papers, Nawaz is on a loose turf.

However, Raheel Sharif cannot wait till 2018 to displace Nawaz. He may need to overthrow Nawaz at the earliest. All he need is some court order indicting Nawaz Sharif, even if it is something as simple as a charge sheet. Imran Khan would again march to Rawalpindi against Nawaz and by the time the political din subsides, Pakistanis may be having another Sharif ruling them. Unlike earlier episodes, this time Nawaz Sharif may relinquish power because he may not be sent to live in exile. After all, the old man can retire to live in peace – with all his ill-acquired wealth.

If he gets control of Pakistan in the year 2017, he need to re-establish himself. Well, there may be another war in 2018, perhaps a bigger one – with India. Though, the war may not last longer, it would suffice to project himself as a tough guy in Pakistani minds. It would serve interests of India too. Effectiveness of newly acquired armaments could be tested in field. In all probability, the once discussed option of converting LoC into an international border may be the outcome of the war. If so, it would put at least a comma, if not a full stop to the Kashmir related militancy. And of course, there would be some collateral advantage to BJP also.