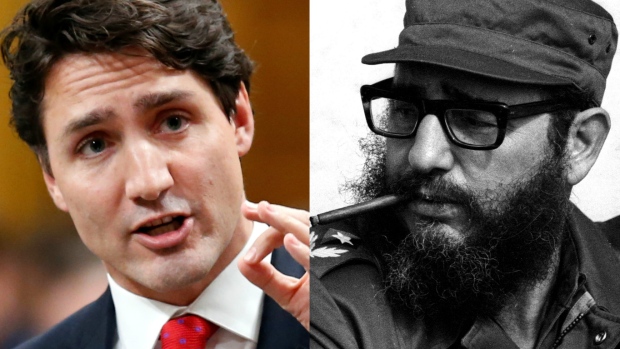 2016 marked an unceremonious year with many public figures biting dust and losing their lives. The biggest of them all was undoubtedly Cuban ex-President Fidel Castro. The death of Castro marked the demise of a sprawling age that reminded us of those days of Cold War when the world inched closer to a nuclear war. Cuban missile crisis, Bay of pigs fiasco all now officially is history and in my opinion the splintered aspects of Fidel Castro and his life was perfectly summed up into a grey. To the fledging communists he was a revolutionary and a hero who withstood American imperialism in Latin America and a villain for those who have embraced the free capitalism world of the west. Having said that, right wing despots and leaders have always been on the radar of liberals who have drummed all their atrocities rightly in the public domain. However when it comes to a leftist dictator, the words and the intent dilute a bit too much to make him a Mother Teresa in the scheme of things.

Justin Trudeau, the young flamboyant Canadian premier went on to lavishly praise Fidel Castro as a mark of respect after his death. But his words made him a humanitarian and entrenched a sort of public service to his legacy.

However odd it may seem with a preposterously funny comparison, somehow I want to liken his growth as a leader with somebody as Mamata Banerjee. Both Castro and Banerjee demonstrated extra ordinary resilience in fighting their enemies in form of American capitalism and the left respectively which unquestionably makes them as fiercely great fighters. However after achieving their goals, their leadership which ensued as a follow up of their fight failed to uplift the very people they claimed were suffering under the predecessor. Cuba under the Iron fist of Castro had to undergo the same fate as Batista who he claimed was an American stooge. Castro became the same himself only with respect to Soviet Interests and his country sort of was cut off from all necessary impetus it ought to revive and progress. The same scenario we are witnessing in Bengal where after fighting the Left and uprooting them, Banerjee is enforcing the same treatment the left had given to the state albeit a slightly different philosophy.

Justin Trudeau’s obituaries and condolences failed to take into account the complex nature of Castro’s attire. Rather he seemed to have walked in the shadow of his father Pierre Trudeau and his family household which viewed Castro as a family friend and his words seems to have intermixed ‘Uncle Castro’ with Fidel Castro who was an antithesis to what the Canadian society truly represents. When Justin remarked Castro’s deep affection and love for his own people, you ought to remember he single handedly ruled Cuba for decades and the nepotism was visible when he made Raul Castro his political successor. His lauding of Castro for health and education looks seemingly meaningless when all opposition over the years in Havana has dissipated and his clinging on to dismembered communism has done the nation more harm than help.

The issue is really not about which political philosophy you adhere to, fundamentally if authoritarianism is the foundations then the roots do not really matter. We have seen despots in all the realms of political spectrum however the hypocrisy painted in demonising a few and celebrating a few more is appalling. Justin Trudeau had gained spotlight for providing a young charismatic leadership in the past however such statements slowly bring out the imbedded naïveté out in the open at the world stage. As a matter of fact, President elect Donald Trump’s tweet ‘Castro is dead’ was subtly viewed through the prism of non-humane format and criticism but then the view which Trudeau held too had its far reaching consequences.

This is not the first time controversial leaders have been praised. When King of Saudi Arabia passed away, then Canadian PM Harper had some good words for him even if he was dictator as he perfectly fitted in the good books and schemes of the west.

Unlike his previous moments of gaffes on international relations, this wasn’t just an outburst or unplanned comment but a thought out statement about not just a leader but an age. Even if this comes as a part of his liberal centrist ideologue of a government he belongs to, Castro was too complicated or compounded to be made into that simple as a tribute.

At the last minute, the Canadian PM canceled his planned visit to Fidel Castro’s funeral in Havana and supposedly made wiser decision in lieu with the so much light over his statement all over the world. A careful approach was perhaps needed after an image beating spur of la fantasy homage to Fidel Castro.