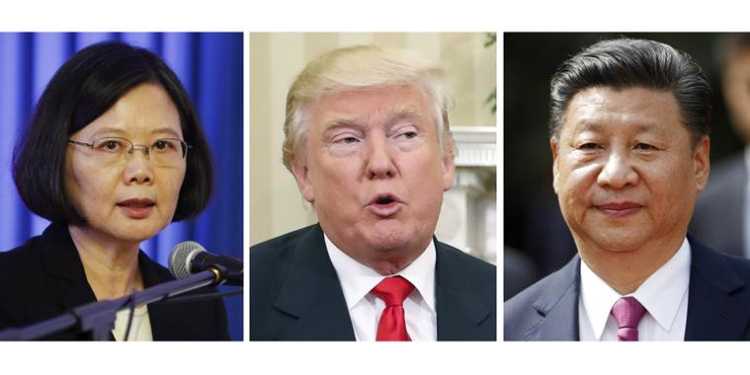 One who spent time in the midst of rocky mountain must have seen huge rocks and boulders precariously positioned yet well balanced over a much small rock. All it takes to dislocate the big boulder is a push at the small rock acting as fulcrum, balancing the bigger one. Taiwan is a fulcrum on which much bigger China balances its many domestic and international policies. And, it is this balance Donald Trump attempted to disturb.

The telephonic conversation between Tsai Ing-wen, President of Taiwan and Donald Trump had ruffled feathers across administrations of many a governments including the current incumbent of White House and of course, the intended target – China.

To introduce the history of Taiwan, it was the Republic of China, the government that was ruling both China and Taiwan after the fall of Qing dynasty in 1912. Communists overthrew the nationalist government during the civil war and nationalist leaders fled to Taiwan in 1949, but claimed main land China too. Till 1971, Taiwan, under the name of ‘Republic of China’ used to represent entire China in the United Nations. People’s Republic of China was recognised in 1971 and Taiwan became the largest dominion outside United Nations ever since. Both China and Taiwan claim the other to be part of them, though they maintain a status-quo in terms of borders and administration. For the outside world, technically Taiwan is part of China. In case Taiwan declares independence and becomes sovereign nation, it would tantamount to declare secession from China inviting military retribution. China, though acknowledges the quasi-sovereignty of Taiwan cannot afford Taiwan declaring independence, as it would inspire many other provinces that were kept under the fold of China, only due to excessive military force.

It is this precarious balance Donald Trump disturbed with one tweet.

The President of Taiwan CALLED ME today to wish me congratulations on winning the Presidency. Thank you!

Prima-facie it appears that Trump only received the congratulatory call from Tsai. It would be so un-gentleman-like, if he refuses to entertain the call from Tsai. If he refuses, it may be interpreted as apparent weakness on his part, considering he is going to don the mantle of the most powerful man on the earth (at least that is what Americans think, no?).

As expected, China protested the talk between Tsai, whom Trump addressed “President of Taiwan” in his tweet. ‘There is only one China’ – roared the dragon. Secretariat of White House, housing the lame duck president responded meekly saying there is no change in the ‘One China’ policy pursued by the United States of America. But, can this assurance by the current incumbent of White House allay fears of China? Maybe not!

Trump followed the tweet on his talks with Tsai, wondering why he should not accept congratulatory call from Tsai, when America continue to supply billions of armament to Taiwan. Of course, with this tweet, not only China, but main stream American media went for a toss and White House had to go into hiding. China’s frustration is owing to the fact that they can’t take any action, for Trump is still a citizen of America and not it’s President. Officially, the word of Obama still weighs.

After a day of break, Trump raked the issue of outsourcing by American manufacturing companies. Of course, he was provoking China. Comments on tax disparity between China and how companies that manufacture in America would get tax benefits have soon turned into questioning whether China sought American opinion on devaluation of Yen. It ended with a question on whether China informed America before constructing massive military complex in the middle of South China Sea.

Well, by now waters are over the heads of Chinese. As suspected, the first tweet on the telephonic conversation with Tsai is not incidental, but a carefully planned move that was calibrated to perfection. Of course, there are reports suggesting the same, quoting some unnamed sources from Trump’s coterie.

China is confused. Suggested responses to the provocation by Trump varied from – well, they could not quite comprehend what to do? They couldn’t decide their reaction because they don’t know what Trumpy boy has in mind. Is he going to increase military sales to Taiwan? If so, they simply cannot do anything, for so far they have failed to decipher in which way Trump’s mood would swing. Economically, can China afford if Trump increases taxes on imports? As economy follows military might, any hard talks by China to America would be useless, if Trump choose to ignore them. Can China really influence Trump and stop arms sale to Taiwan, if he intends to sell? Perhaps not. Taiwan would continue to receive arms from the United States.

As someone suggested in their official controlled Global Times, China may well turn to ‘punish’ Tsai Ing-wen. What is the punishment? It was suggested to let Taiwan lose one or two diplomatic allies. Apparently, only those nations controlled by China may severe their ties with Taiwan. The action only invite ridicule from the world. As such, even the so called lack of recognition from United Nations could not affect the status and progress of Taiwan. What would happen if one satellite nation choose not to speak to Taiwan? Nothing. It is not that China doesn’t know the futility of such an exercise. But, they did let publish the suggestion, perhaps considering Tsai may be influenced.

If Trump’s call with Tsai is something that was part of a well-orchestrated plan, then China should stop worrying about Tsai and worry about Trump. In hindsight Putin looked a visionary, considering his one to one equation with Trump. Even if America under Trump withdraws from the world, it would suit to Putin. If not, both would be allies – sort of.
Declaration by Trump to withdraw from the TPP (Trans-Pacific Partnership) is being seen in China, as an opportunity – at least by some. However, if really Trump choose to boost native manufacturing in America by reducing imports, most of the set-ups in China by western companies would be losing customers. And China acknowledges this fact. China is now twisted in thinking how the discussion had deviated from Taiwan to economy? Trump thumbed nose up to China, when he referred to the Chinese building military complex in South China Sea. If America questions the legitimacy of China’s claims over South China Sea on one hand and talks directly to Taiwan on the other, can China survive such a humiliation? What would Trump achieve in the entire game? Or America, for that matter?

As one unnamed author of Global Times put it, Trump has two faces. He bluffs and unpredictable. On the other hand, he softens his stances often. He may really not thinking to jeopardise any of the international treaties, but indicate what he can do. May be he was signalling to prospective allies and opponents. It may well be seen as an act of leaving to others to choose which side they would be – with him or against him.

All said and done, for the first time in many decades, China had feared for its territorial integrity; all in the time of two days! It is not about Taiwan, but about Tibet and other provinces that may get inspired, if China failed to act against Taiwan. And any action by China in Taiwan would be seen nothing short of an act of war. China cannot afford seen to be fighting an internal war – with Taiwan. It would weaken the dominating position China currently enjoys in the Asian region.

The planned action by Donald Trump that was made to look so impromptu had really unnerved China. Finally Trump’s lack of historical knowledge could only help him in – making history.