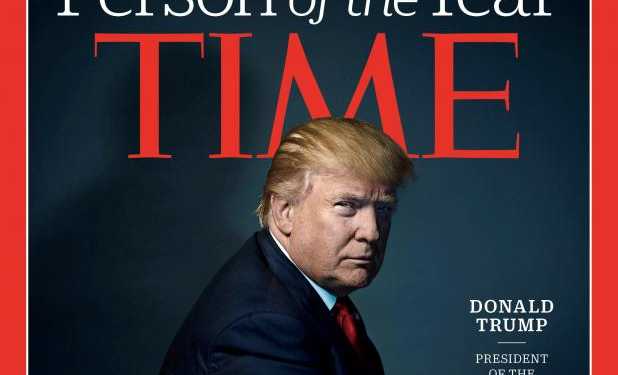 U.S. President-elect Donald Trump poses for photographer Nadav Kander for the cover of Time Magazine after being named its person of the year, in a picture provided by the publication in New York December 7, 2016. Time Magazine/Handout via REUTERS

TIME has an annual marketing event during which they select ‘Person of the Year’. And, the person gets selected by editors of the magazine and not by vote. If popular votes are not going to make any difference, why did they choose to have the voting at all? [If anyone is thinking this column is against TIME, for not choosing Modi, please stop reading further]

It is definitely the magazine’s prerogative to define the selection process the way they want. After all, it is their event. If the world awaits to know the POTY, that is the world’s problem. Have you got it by now? Yes, it is this elitist arrogance I saw in yesterday’s declaration. Though it is not for the declaration itself. Of course, Donald Trump deserves to be the POTY, considering the stand United States of America commands in the world.

If anyone takes pains to know why Trump was chosen by TIME’s editors, here it is (verbatim):
“For reminding America that demagoguery feeds on despair and that truth is only as powerful as the trust in those who speak it, for empowering a hidden electorate by mainstreaming its furies and live-streaming its fears, and for framing tomorrow’s political culture by demolishing yesterday’s, Donald Trump is TIME’s 2016 Person of the Year. “

But, what’s with the caption TIME used to declare Trump being POTY?

He was described as ‘The President of the Divided States of America‘. Compare the caption with the reasoning; one understands the inherent contradiction. Was TIME indicating Trump was a demagogue to despair filled Americans, and truth failed because Hillary could not evoke trusts in voters? Does it mean whatever Trump said was false and Hillary represented the truth?

TIME has conveniently reminded readers that even Hitler was declared POTY and so POTYs aren’t all heroes. Yeah. Considering the Nobel Prize receivers in the last two decades, from Gorbachev to Arafat to Obama to Malala, it is clear that selections are based on “expectations from them” and not necessarily for “the results of their actions of past”. Perhaps, same is applicable for TIME’s selections.

Of course, if left for the masses, the society could never progress. And so, elitists (like me?) prefer to direct masses. Maybe that was the reason behind readers’ poll too, so that they can be told how wrong their choice is. And, this shows limitations of democracy.

Intrinsically, democracy thrives on dictatorship. That was what I thought after witnessing how the ‘democratic’ America supported various puppet dictators in many countries. Even the communist states, which were supposed to be for the Proletariat always run by dictators. Even in India, almost all socialist parties are family run business houses. In fact, they reduced ‘political class’ to a caste.

To compensate for the atrocities committed by Adolf, Angela played true to her name and invited migrants from the civil war affected middle-east. She could very well have stopped the war, with the help of like-natured Western nations, if she had the will. Alas, the West sells arms to both the parties. It makes a bad business proposition to halt the war. Rather, many more billions can be spent on migrants so that a stimulus can be induced into the otherwise falling European economy that was just tested by the Greek crisis. After playing Santa Claus for one year and disturbing the otherwise routine lives of her countrymen, she realised elections are approaching. And migrants don’t vote for her, i.e., even if they have voting rights, how can migrants following Shariat can vote for a lady who doesn’t cover herself? So, she suddenly realised (so much like me?) full-face veil is not acceptable in Germany!

Coming to India, one writer noted not Jayalalitha was not Amma for all, even in Tamilnadu, because her record on caste based atrocities was poor and she framed defamation cases on more than 100 journalists and opponents. Of course, it is true that caste based atrocities in Tamilnadu are far more than they were reported in national media. And Jayalalitha couldn’t bare anyone who opposed her. Even court warned Tamilnadu government to exercise more caution in registering defamation cases.

Then, I thought – was there a single leader in India, who could control caste based atrocities and not acted on journalists at one or the other point of time? When in power, leaders of all parties behave as if they are Kings (or Queens) and as soon as they lose elections, they remember rights of journalists and worsening law & order situation.

Was I perturbed because I liked Jaya more? Well, I like Jayalalitha and Karunanidhi both for their knowledge (in fact, I like Karunanidhi more, for his flair in Indian theology, despite being an atheist) and despise them – for her arrogance and his nepotism.

So, the column I read in Hindustan times was a hypocritical one? I doubt it. At the most, the author should have declared all politicians are no saints. But, if the subject of the article was Jaya, why he should comment on others? But, how can a Mamta Banerjee’s fan (Haha!, the columnist declared himself – Mamta fanatic) can blame Jayalalitha – for anything?

How can we claim Gandhi was Mahatma to all Indians, if Jayalalitha could not be called Amma for all.

Yet, we made him the father of the Nation. Narendra Modi was questioned for his failure during 2002, for more than a decade by all including the Supreme Court. Though many Hindus were dead and jailed during 2002, Modi was demonised. Rajiv Gandhi, who dismissed the pogrom against Sikhs and contributed against Tamils was awarded Bharat Ratna. All one hears about Rajiv was how he ushered India into Computer age. Everyone conveniently forgets Narayana Murthy speaking about the red tape he had to face to import – one computer, during the golden regime of Rajiv!

And Mamta Banerjee, was crying hoarse for people died while being in queues at Banks and ATMs.

Had Mamta Banerjee and parties in the parliament really reacted with the same seriousness on the railway accidents (in the Kanpur accident alone, nearly 150 people died), perhaps our trains would be running on the rails instead of derailing? But, the parliament itself is derailed. So, should we not worry for the people died in the queues? We should. But we should worry more for the ‘insensitive’ people who could not help those unfortunate.

Please worry for me. I worry for you. Of course, we all are hypocrites. Isn’t so?