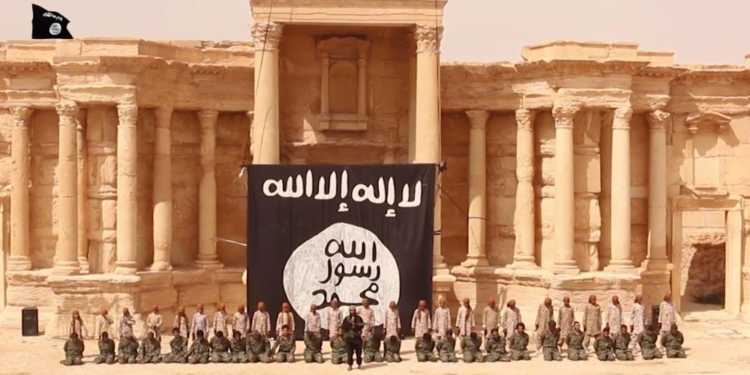 On 13th December 2016, the Syrian Army (or the Syrian Arab Army, known as SAA) finally liberated the city of Aleppo from the Islamists who had overrun it after months of brutal, bloody warfare.

Yet, as we have already seen- the Vile have countless allies. Over the past week, the focus of the global Liberal media- among whom the so-called heroes of ‘Free Speech’ in India figure- have been unceasing in their harping on Palmyra, instead of talking about the victories the SAA was piling up in Aleppo.

For those who haven’t been following the Conflict- Palmyra is one of the most important historical sites for pre-Islamic Arabia. It served as an important trade centre since the early 2nd millennium BC. It rose to prominence as a rival to the Roman Empire in the 3rd Century under the Empress Zenobia, its mightiest ruler. As such- the very existence of Palmyra is an affront to Islamists- since it points to a flourishing pre-Islamic civilization ruled by a woman. (Readers are free to use Empress Zenobia’s example while debating with Sharia-supporters claiming that Islam ensured rights for women). As such, Palmyra was one of ISIS’ first targets. After taking over the area, ISIS spent months destroying the priceless historical artefacts and buildings in the region- especially focusing the destruction of the ancient Indo-European religious sites of the Greeks and Romans and anything related to the Palmyrene Empire of Empress Zenobia.

When the SAA, with the aid of Russian air power, took back Palmyra early this year and celebrated with an orchestral performance, it was universally acknowledged- at least by Conservatives- as a triumph of Civilization over Barbarism.

The Liberal media- led by organizations in the West and the Gulf- have been using this as the base of their new anti-Assad (anti-Putin) strategy in recent times. This goes hand-in-hand with the usual drivel about peace and human rights which we have discussed in an earlier article. The Liberals have the following arguments:-

1- Palmyra is one of the World’s most important historical sites and by losing it, the SAA has proved itself incapable of holding territory and taking over occupied cities like Aleppo. Thus, a ceasefire should be in place to ensure safety for Citizens.

2- The loss of Palmyra reflects the people’s opposition to the Syrian government. Also- the same Liberal media has, in recent days, been accusing the Syrian government of war crimes- including chemical weapon attacks. In addition, the Liberals in the West (and even certain sections of the ‘Free Speech’ brigade in India) have been attacking Syria over alleged cases of ‘Mass executions’ and ‘Murders of Children’.

3- Since Palmyra was one of the two major airfields under Syrian control until recently, the Liberals believe that this is reason enough for ‘moderate’ Islamists (read- Al Qaeda) to be funded so that these would fight against both ISIS and the Syrian government.

Such insidious anti-Syria propaganda is cleverly written by ‘highly qualified and experienced intellectuals’ who have received countless awards from Western universities and think-tanks. Resemblances with our local intellectuals is not coincidental.
Such claims are also nonsense.

1- Readers are encouraged to verify my points independently with a map. Palmyra is a minor village with a low population surrounded by hills. It is difficult to take, difficult to hold, and diverts important resources from the War- such as the fight for the major city of Aleppo. Assad and Putin are fighting not only against ISIS- but also against a who’s who of terrorist groups including Al Qaeda- most of whom are being directly and openly funded by NATO and the Gulf.

2- Claims of Human Rights violations are similarly nonsense. All reports are from dubious news agencies such as ‘Aleppo24’, which are picked up and parroted by known NGOs like Ford Foundation- which is well-hated by thinking Indians for obvious reasons. Similarly claims by the UN are invalid- seeing that the UN is a rubber-stamp body for Arab-American Imperialism. Saudi Arabia- which stones raped women and beheads atheists- is the head of the Human Rights chair of the UN. This has been borne out again and again- and even as recently as last week. For the past many months, organizations like the White Helmets have been criticizing the Syrian government and claiming that nearly 300,000 people were being attacked in Aleppo. But after the SAA’s victories, we find that less than 70,000 people are at Aleppo- and the White Helmets, once considered for the Nobel Peace Prize- fled Aleppo the moment things got hot! It is no surprise that the Russian media often describes the White Helmets as a PR arm for the Islamist alliance- funded, as readers would remember, by NATO.

3- Palmyra might possess an airfield- but it is meant entirely for tourist flights and, after years of war, is unsuitable for military usage. In addition, the SAA already possess a far more well-equipped and sophisticated Airfield at Tiyas. While Palmyra was left undefended save for some local militia drawn from an already tiny population, Tiyas is extremely well-defended and threw back multiple assaults by ISIS recently.

But in no case, there is no way anyone can justify the Liberal support for ISIS. But then again, we have seen in India that the Liberals and the global media have little compunctions about championing people chanting ‘Bharat ke tukde tudke honge.’

Similar refrains were heard in Syria as well. And Assad and the Syrian people have proved them wrong. Good- however ephemeral and fleeting in this Kalyug- has triumphed one more time.

But what lessons can we Indians learn from this? Very old ones:-

1- The West are not India’s allies. And this is not at all unexpected. It is the natural fate of States to be either Empires or Slaves. India- by its sheer size, economy, and military might- cannot afford to be a Salve, lest we suffer like we did during the British tyranny. There has long been suspicion of CIA being associated with the mysterious deaths in ISRO. The Gulf States treat Indians like chattel and fund Wahhabi parties in India. Even the KGB is known to have paid spies in India. All and each country in the World- even Israel, India’s so-called best friend- have to be treated like the enemies they are at worst, and potential enemies at best.

2- The Media and NGOs- especially those championed by the liberal Elite- are closet foes of Nationalists like in Syria and India. These bodies- in the perfect Orwellian manner- have created a self-perpetuating narrative of victimhood where any action against them is greeted by the baseless cries of ‘Fascism’! (http://qz.com/…/along-with-narendra-modis-rise-india-has-…/…)
This Potemkinesque idea of Fascism where even the mere suggestion of another viewpoint is considered anathema is not ‘Free Speech’ but the grossest form of tyranny! These are the same individuals who want Syrians to lie down and accept an Islamic theocracy, the very same system preached by those like Owaisi in India. These are the same individuals who oppose moves by Syrians to save their country, the very same thing they do to oppose power plants and the free market reforms in India. These are the very same individuals who turn a blind eye to the women being raped and the children being sold in Syria by Islamists- much like they ignore the suffering of Hindus in Kashmir, in Bengal, in Kerala, in Western UP!

3- Liberals are the natural allies of pan-globalist ideologies such as Islamism, as championed by ISIS. Their puerile demands for ‘Peace’, their incessant whining about the empty spectre of ‘Human Rights’, their hatred for traditional Cultures- all mask a nihilistic and immature understanding of the World around us. As us- like the proverbial fool- they are a greater danger than even the most rabid Islamist in the wilderness.

Eternal vigilance and Cultural pride are essential tools of the survival and prosperity of a Peoples!

The people of Syria- a tiny nation- have shown the road. We will be cursed forever if we don’t stand up for Civilization and Nationalism at this juncture as well.

It is not a crime to be proud of one’s Aryan heritage, given to us from the ancient sages of Bharatavarsha- which extended from the ‘Himalayas to the Sea’ (and not in Europe as the so-called historians and politicians who teach the Aryan Invasion Theory tell us).

It is not a sin to be proud of one’s Hindu heritage, a faith that preaches tolerance, kindness, duty, and honour- instead of blind hatred to the Other.

It is not a sin to want a nation of one’s own, a land to call our own, a place where we can dwell in peace.

It is Hinduism that allowed Jews and Parsis to find shelter when all the World bayed for their blood. It is Hinduism that allows other cultures to flourish while certain others preach nothing but assimilation or slaughter. The contribution of two tiny Tamil kingdoms or three Oriya cities in Arts, Architecture, Music, Dance, and Literature strip those of all communists, feminists, and leftists in the history of Civilization! It is Hinduism- not Liberalism- that talks about the plurality of thought.

Or our fate would be no better than that of Palmyra, once so fair and now nothing but ashes.

Russia provides evidence on US involvement in the Palmyra attack by ISIS: