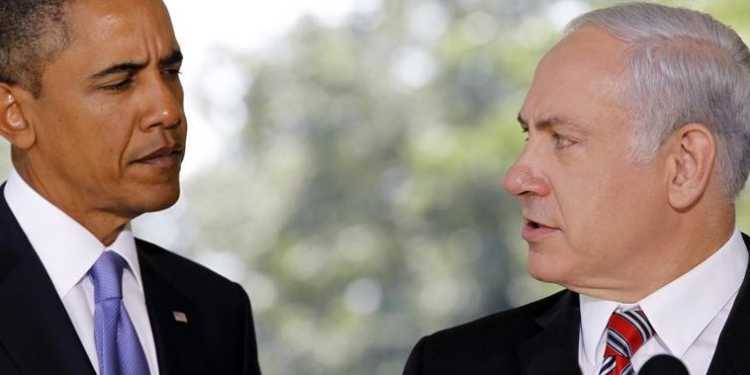 U.S. President Barack Obama (L) listens as Israeli Prime Minister Benjamin Netanyahu delivers a statement to the media from the Colonnade outside the Oval Office of the White House in Washington September 1, 2010. REUTERS/Jason Reed (UNITED STATES - Tags: POLITICS IMAGES OF THE DAY) - RTR2HSTC

The recent developments in the UN have stunned the world. Rejecting the resolution passed against Israel, the Middle Eastern country feels betrayed and backstabbed by their long term friend.

Well, the United Nations Security Council rebuked Israel for the establishment of the settlements in the East Jerusalem and conquered Palestine along with the Western bank. This led to moving a resolution against Israel to stop the construction and is seen as an insurgency against the PEOTUS Donald Trump who wanted Obama administration to veto this resolution and develop the interests of the long-term friend, Israel.

This resolution was abstained by the US and was passed with applauses from 14 of the 15 member countries of UNSC. In layman terms, the occupied region which is being talked about are the Palestinian territories which were captured from Jordan in the war of 1967. This “shameful anti-Israel resolution”, as termed by the Israeli government, was introduced by Egypt in this house. Presenting this in coordination with the Palestinians, Egypt’s draft claimed Israel’s “settle building” in East Jerusalem and occupied West Bank to be a “flagrant violation of international law” and called for the discontinuation of the all the settlement activities from the mentioned point of time.

The mention resolution proposed a cessation on the building of the settlements and asked the involved parties of Israel and Palestine to arrest the persisting tough situation and look forward to the reliable negotiations.

With the US being one of the five permanent members of the house, its veto would have dismissed the resolution and supported the agenda of Israel in the endowment of settlements.

Although, the permanent representative in the house for the USA defended the stand of his nation of abstaining than veto. In his words, the US did not veto the resolution since it is consistent with US policy and directly reflects the facts on the ground. Further, it is stated that “one cannot champion settlements and the two-state solution” hand in hand.

The whole drama on the resolution began when the President-elect of the United States, Donald Trump tweeted “The resolution being considered at the UNSC regarding Israel should be vetoed.” It was his attempt to influence the existing foreign policy.

At the same time, he even called his Egyptian counterpart and compelled him on the resolution being talked about! Following this, Egypt backed out and council meeting scheduled to be held on Thursday was proposed. Later, the office of Egyptian President even confirmed that this was so done because the president-elect of the USA and Egyptian President al-Sisi was up for the comprehensive dealing of the new administration with the persisting situation in Palestine.

Nevertheless, in an unexpected move, New Zealand, Senegal Venezuela and Malaysia brought the resolution before the council.

Once the resolution was passed by the UNSC, Trump sought to Twitter again to convey his bold message “As to the UN, things will be different after January 20,” (2017) the date of his swearing in!

In the other part of the world, Israeli Prime Minister Benjamin Netanyahu was confident, aggressive and bold in the statements he made against the resolution and did not shy away in blaming the United States directly for backstabbing Israel. He made it clear and they will not abide by the demands proposed by UNSC for Tel Aviv and will not halt the settlement-related activities in the land of occupied Palestine.

He was disheartened at not only the failure of Obama administration in protecting the rights of Israel against the gang-up but also called refuted against behind the scene conspiracy. Providing a hint of his relationship with the US, he was firm when he assured that to “negate the harmful effects of this absurd resolution”, Israel is looking forward to working with Trump and “all our friends in Congress, Republicans and Democrats alike”.

Israel expected Obama to veto the resolution for the obvious reasons that US had no issues using the power to thwart any resolution which was criticizing Israel directly. In the year 2011, three similar resolutions to the one passed this Friday were vetoed by the US in United Nations.

The building of these settlements was seen as an exercise in a hope of prevention of the consecutive areas to a separate nation of Palestine under several plans which support the two stated nation.

You can read the entire text of resolution here: