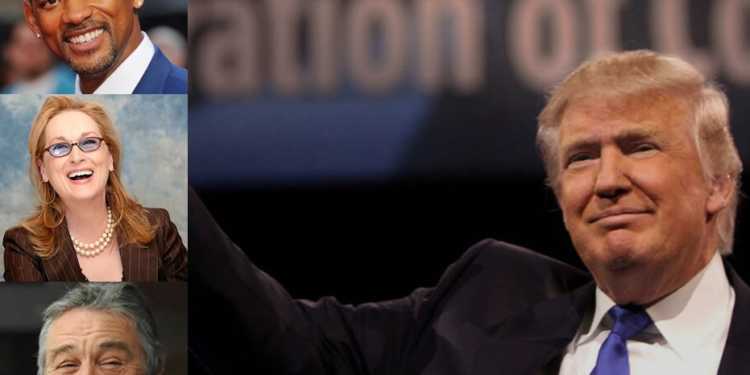 Right from the point when Donald Trump was elected as the Republican Party Presidential candidate, he has been mocked by the members of the entertainment industry in the USA. The situation hasn’t changed even after the fact that Trump has been elected as the President of the USA and his term will begin soon. Hollywood has been united in mocking the President Elect.

Whether it is talk show hosts like John Oliver, Jimmy Kimmel, Jimmy Fallon, or Hollywood icons like Robert DeNiro and Will Smith, they all have blasted Trump.

Recently, the legendary actress Meryl Streep took a dig at Trump in her Golden Globes Speech. British actor Hugh Laurie, most famous for portraying the character Dr House from the famous TV show House M.D. stated that he had won an award at the last ever Golden Globes because the awards have the words ‘Hollywood’, ‘Foreign’, and ‘Press’ in them, indirectly mocking Donald Trump.

The likes of Meryl Streep, Hugh Laurie, Robert DeNiro, and others are all exceptional Hollywood artistes who have made characters come to life with their outstanding abilities. But are they being unfair to Donald Trump? I would definitely say yes, they are being unfair to Trump. The man was elected by the people of the United States of America, a country with a population of about 324 million. It was the people who elected him as their President.

Statements like “I feel like 9/11”after Trump’s victory are ridiculous. How can the victory of Trump be even compared to 9/11 which was one of the most horrific incidents of terror in the history of America? Is Trump comparable to Osama Bin Laden? There may be many things wrong about Trump, no doubt about that. But comparing him to a terrorist is unwise. Trump has spoken out against terrorism and he has the potential to be the most powerful weapon against terrorism.

What Hollywood celebrities need to understand is that they are a part of the elite population, which is a minority in the United States. The average American has voted for Trump.

The average American, who aspires to have a job for himself so that he can provide for his family, the average American who was not attracted by Hillary Clinton’s vision of America. The average American who believes that Trump will indeed “Make America Great Again”. It would be wise to give the man a chance before judging him as how his Presidential reign would be and it applies to everyone and especially to the Hollywood celebrities who seem to have forgotten that they are a just a small part in the 324 million American society.

ITAXIT after BREXIT? Why Italy might leave the European Union?