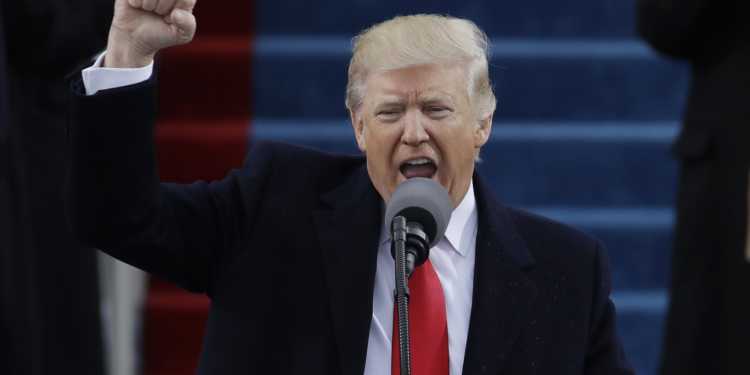 “… And unite the civilized world against radical Islamic terrorism, which we will eradicate completely from the face of the earth.”

For someone watching President Donald John Trump speaking from the steps of The Capitol, these words, and specifically that one word, came as a welcome surprise. Given the times we are living in, acknowledging the global presence of Islamic terrorism is a must for a man who aims to hold one of the most powerful positions on Earth for the next few years.

Yes, he may have killed the prospects of ‘being awarded’ the Nobel Peace Prize, but President Trump’s speech at his inauguration showcased how much he doesn’t care for the theatrics.

This acknowledgment is going to be essential when it comes to strengthening ties with India. With ISIS already carving out a presence in Balochistan; who knows what the next few years might hold for countries which have been ravaged by Islamic terrorism in the past. Thankfully, the new American President doesn’t think that trucks and Lorries turned death machines in Europe during the recent Christmas celebrations.

Clearly, President Trump has inherited America in a far better condition than his predecessor did. The pain of recession no longer torments the establishment and the administration in Washington D.C. but there are people still struggling, the same people who voted Trump to power, and the same people who have to suffer from the shallow righteousness of the liberals when it comes to voicing an opinion. Much like his campaigns, President Trump began his speech with the idea of ‘Making America Great Again’. What constitutes this greatness or what are the efforts that would help the new administration attain this greatness is a question that would see multiple answers in the next 4 years. He expressed his gratitude to President Obama for a transition that one cannot term as exactly smooth or friendly. Yet, the formalities had to be completed, and so they were. However, from there, President Trump’s speech was all about what is voters craved for. No academic phrases, no cosmetic English, no big talk with fancy words, but a straightforward and raw acknowledgment of the problems that plagued America. Trump ensured that his followers across the globe weren’t disappointed.

President Trump stressed on transferring power back to the people, and how the establishment found ways to bail itself out when the citizens struggled. This led many media houses and personalities to term him ‘Anti-Establishment’. However, one wonders if the establishment, in any country across the globe was a fair one if it did not allow its power to rest with the people? How about an establishment that is anti-people? The Americans chose a man who was termed ‘anti-establishment’ for his idea to transfer power back to the people instead of a woman who wanted to retain the power by leading the same establishment. At this point, I’d like to address the first viral meme that is going viral. No, the idea of transferring power back to the people is not what Bane did in the third film of the Batman trilogy. Bane caused rioting and unleashed criminals in the story, and therefore, the comparison is wrong. Contrary to what is being said or shown online, comedians aren’t the best judges of any economic or public policy, America or India.

In his attempt to blame the former administration for the crisis that has encompassed America, President Trump did bring back the memories of Ronald Reagan who believed that the government was the problem and not the people. One can’t be sure if he shares Reagan’s views, but President Trump, as of now, isn’t looking to blame the citizens for the problems caused by the government. Throughout his speech, President Trump was more focussed on what the country could achieve with its citizens than what his government had to offer. Alongside, his views on establishment are further strengthened by the people he has hired to lead the crucial wings of his administration.

President Trump, in his speech, stressed what’s wrong with the social structure of the country, and how he wishes to change all of that. From schools unable to impart young Americans with the knowledge to the drug cartels that run in the darker corners of the cities, he wishes to change all of it. New jobs, making and hiring American, better schools and universities, eradicating poverty in the interior of America, and ensuring that the forgotten ones are no longer forgotten; the new President has a huge challenge staring at him. Will it be that easy to create new jobs? Even though he already had a multinational shifting its manufacturing plant from Mexico to the US, a single case study is not going to reflect the future actions of other enterprises. Even though the market is booming in the hope of tax cuts and other regulations, leading to a stronger dollar, it would be interesting to see how President Trump leads the creation of new jobs and opportunities for its citizens. Also, what if the On-Demand Economy that is fuelling large investments and has enterprises showcasing valuations running into billions of dollars crashes in the next 4 years? For the new President, it might take a few weeks before he realizes that he cannot run the Oval Office like he ran his business from one of the Trump towers.

Other aspects of his speech clearly signal and increased spending on Border Security, and as he stressed about how America had successfully managed to make other countries secure while ignoring its own sespecurity, one wonders what would be his plan to fight Islamic Terrorism, and if it will involve Russia or not?

The factories have shut down, he remarked, but they will be brought back. One again wonders how President Trump is going to fight the tsunami of automation and technology that is causing job losses across the globe? In India, in the last one year, Infosys has got rid of 9,000 employees because of the emerging employment of automation, and that’s just one company. Across the world, automation is going to kill more jobs than it can create, and with the uncertain future of the Gig Economy, job creation is going to be a hard task, unless President Trump goes back to the 1930s and has the conventional methodologies of production employed to create jobs.

A few references to Bible and social unity added President Trump’s speech was far from impressive. However, that did not deter his voters or followers because they weren’t looking for a leader with an impeccable skill when it came to speaking. In the new President, his followers see hope while his critics see Hitler. While the chances of President Trump being the latter are close to zero, he won’t have a smooth ride in office, irrespective of what his intentions are, and clearly, this is not going to be our last take at TFI on the words and actions of America’s 45th President.

Sitting in India, we can only grab the biggest tub of popcorn there is and watch President Trump unleash a new series in foreign policy. Even though he seeks good relations with all countries across the world, President Trump will soon realize that in diplomacy, one cannot make a lot of friends without making a few enemies.

Politics and Presidency today is no longer about how classy the family or the First Lady is, or how great a speech can one weave with the finest words from the Thesaurus. It’s about intent, about acknowledgment, and about calling a spade a spade, and that is what exactly President Trump did. In his own words, “The time for empty talk is over. Now arrives the hour of action.”