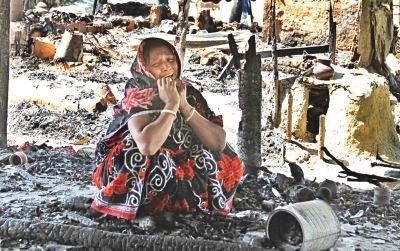 Among the various stories around India’s partition, Khulna is a story which remains lost in the ruins of History.

Now first of all what is Khulna?

What is surprising is that in 1947 it had a population of 52% Hindus and was supposed to be a part of India, but it was traded for Malda and Mushirdabad (Muslim Majority) since giving these 2 divisions to East Pakistan (Bangladesh’s previous name) would have meant cutting the entire southeast Bengal( Hindu dominated) and Calcutta from it’s north Bengal districts of Dinajpur, Coochbehar, Darjeeling which were a mix of Hindu, Muslim, Christian and other tribal religions. Muslims formed the majority in the central part of Bengal and had access to both South and Northern parts of the state, giving access to these 2 divisions would have meant cutting access of India from its entire north eastern states giving a very narrow passage through Dinajpur and Jalpaiguri to access the 7 sister states.

Khulna is the perfect example of this disparity where the once dominant Hindus(52%) in Khulna are a meager minority in their own land 11.2%.

While the Muslim Population of Murshidabad increased from 55% in 1951 to 66.285 in 2011. One clearly wonders how is it possible that Bengalis are becoming migrants in their own lands. Bengali culture and language represents Sanatan Dharma and Sanskrit. Jol is what Bengalis call Water, calling it as Paani like Urdu speakers do won’t change the essence of it.

Just after formation of Pakistan, its education minister made Urdu the only official language of Pakistan because it was what pious Muslims should do, denying the rights of Majority spoken language of Bengali since it was the Kaafir’s language. Although there was a huge uproar in Bangladesh for the language and the name of the country is also derived from the, the incessant proliferation of Urdu words like Paani, Dost, Kutta, Zameen, Palang etc have diluted the original essence of the language.

It is also somehow conceivable for Pakistan to act like an Arabic state because at least 20% of their population has links to Arabic ancestry with majority parts of Sindh, Baluchistan and Khyber Pakhtunkhwa sharing cultural similarities to their Islamic neighbours but Bangladesh is a country of Pure converts who neither have any Muslim neighbourhood and neither do their fertile green lowlands have any similarities to the vast desert regions of the central Asian states. In fact it is a dream place according to their holy book with streams of fresh water flowing everywhere and abundance of Flora and Fauna with birds chirping around.

Just like we have lost Rupsha river, Khulna and subsequent other parts of Bengal to second category Arabs who just speak Bangla but have their hearts set out somewhere in the deserts of Persia.