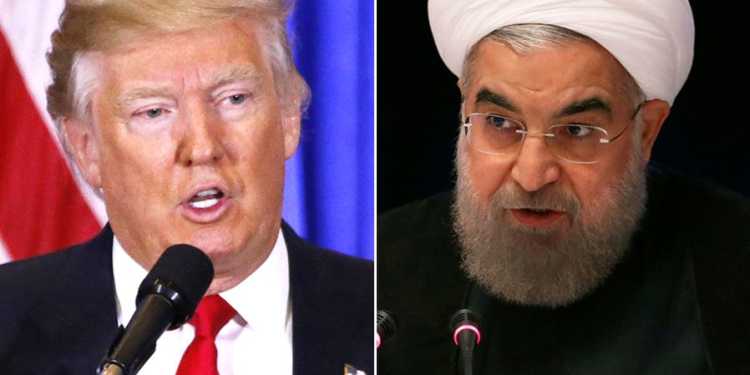 There is a similarity in the way George Bush and Donald Trump became Presidents. Their elections more or less were controversial with former embroiled in Florida recounting episode and latter being criticised for a huge difference of popular votes. Foreign policies of both catered to different situations but during election campaign and just after winning, Bush was more or less promising not to meddle in world affairs to declare himself as compassionate conservative. 9/11 happened and then the war mongering neo conservatives dominating his cabinet pushed military into two invasions of Afghanistan and Iraq. When Bush gave his famous state of the Union address in 2002, he referred to an axis of evil in post 9/11 world which included Iraq, North Korea and Iran.

With Trump vociferously campaigning for elections in 2016 in a post ISIS world, not much has changed except for Iraq in the axis of evil doctrine but American foreign policy remains wary of the other two nations. However specifically pertaining to Iran, Trump had very bombastic views of the Middle East nation which continues to have strained relations with Washington since 1979. The six-nation nuclear deal perpetuated by the outgoing Obama administration that supposedly softened Tehran’s nuclear ambitions was rejected by the Trump campaign. As the presidency ensues, a certain war of words between the two countries reached a certain new low and new found fresh hostilities are expected to rise in the near future.

The glaring question however remains, is Trump administration pushing the region into another war and invasion?

The build up for a blueprint of a war that was presented against Saddam Hussein all began with war of words. As I mentioned above, the state of the Union address paved the way for furthering of war drums and catalysed a conflict. In the present scenario, tweets by President Trump did the needful. The acrimonious position of the Trump administration on Iran coincided with the ban it placed on Muslims from seven countries which even included Iran. This created a double whammy of sorts and new ballistic missile tests were made by Iran, clearly aimed at posturing against the new American administration. This was furthered by another counter reaction from the Trump presidency in the form of sanctions on Iranian companies which escalated the quagmire into a more precarious situation.

Now we come to the second part about the men surrounding Trump and you get an idea of sheer anti-Iranian rhetoric emanating from them. This is again strikingly similar to the way neoconservatives operated against Iraq then where a resurgent Rumsfeld had quipped ‘there are better targets in Iraq’ post 9/11. The combination of men advising and surrounding Trump all harbour hard-line anti-Iranian stances. When eyes and ears of the administration are seeking a certain policy, invariably the presidency looms favourably in that direction. General James Mattis returns to Washington as the defence secretary after being forced out of the Obama administration in the past.

A man who oversees budget of over 500 billion dollars and directs military policies has a tremendous fixation against Iran. With combative experience in Iraq and Kabul, the man believes in open hostility towards Iran which compounded by Trump’s angry outbursts could make a dangerous cocktail of seeking a provocation. This very line which Mattis harboured that time too steered Obama to relieve him from the command in the midst of the nuclear deal with Iran being materialised could have been sabotaged. Calling it the single biggest sponsor of terrorism in the world, Mattis just echoed what Rumseld had said about weapons of mass destruction then and Cheney who linked Saddam to Al Qaeda. Although nuclear weapons is one aspect, the other part lies in the fact that Tehran is aiding the houthies in Yemen which is strategically against American and Saudi interests in the region. A nuclear armed Iran would counter balance Israel and may even worsen the situation with Saudis too exploring a N option.

Steve Bannon, chief strategist to POTUS Trump, who was considered the brain behind the travel ban and CIA chief Mike Pompeo add to the growing anti-Iran chorus within the administration that may spill over to formulate an actual policy.

With a cabal in place feeding an already Iranian nuclear deal critic of a POTUS Trump, garnishing of tweets and firing of ballistic missiles has created a perfect atmosphere of distrust in the region.

However, the clouds of protest in America and worldwide (somewhere sanctioned and supported by the George Soros troupe) has definitely polarised population with the establishment media and polity seemingly anti Trump. Amid this scenario, building a consensus and support to drum up another conflict in the Middle East may not be a cake walk of sorts. The firestorm of tweets and an aggressive posture by the Trump administration has already galvanised the Iranians who protested against US on the streets which is contra distinctive to nations like Iraq where subtle discontent against the rulers at least was a consolation. The other aspect may be the mess of Syrian conflict which is churning refugees and is being a theatre for proxy war between geopolitical players may throw up another one in form of Iran which may complicate an already volatile region. An unstable and autocratically headed Turkey, the war in Yemen and the threat of ISIS already has flash pointed the Middle East. Russia having interests in Iran and Israel which may be pleased with an eventuality of a war (Iran has openly threatened Israel with its nuclear program being said to be a deterrent) may give more dimensions and niche a truly global conflict with profound ramifications.

The conditions that had nurtured Iraq invasion are not exactly the same but rhetorics and persuasion to provoke Tehran is certainly on the table. Nevertheless, Iran is responding to new found aggression by Trump presidency with its own counter belligerence. Trump may wait for something like the ‘Gulf of Tonkin’ incident which sparked Vietnam war. Till then tweets will continue, missiles will be demonstrated and an uncertain future in the Middle East will continue to linger.