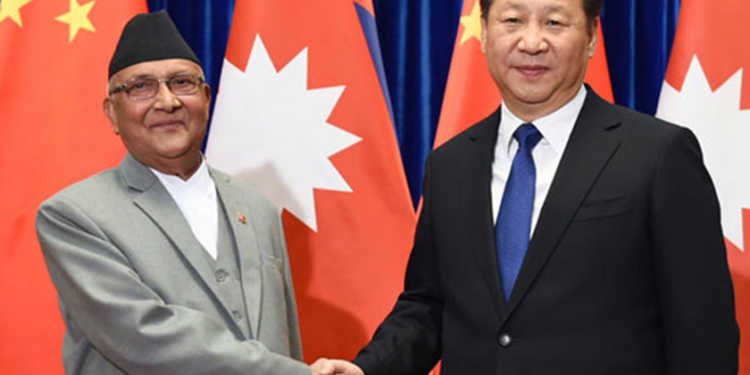 Nepal and India both share thousands of years of history with the latter achieving democracy only a few years ago. Nepal is also a secular state now from its previous tag of a Hindu nation. Due to our deep cultural ties, India and Nepal have signed the ‘ 1950 Indo-Nepal Treaty of Peace and Friendship’ by which Indians aren’t required to produce any Visa or Passport while travelling to Nepal and people from both nations are freely allowed to cross the Border and do trade with each other. Nepal borders itself with the populous regions of Bihar, UP and West Bengal and is very close to our national capital Delhi. So in case of Nepal being taken as a colony by any foreign country can be a dangerous proposition and the threat can quickly percolate beyond border.

The recent attempts by China are seen in the same direction where its plans to make a ‘String of Pearls’ in the Indian ocean, centred around encircling India militarily and commercially via sea lines of communication. While Nepal is a landlocked country it is not too far away from the Bay of Bengal. It also shares a long border with China with some of the tallest mountains in the world acting as a barrier in its eastern front. Nepal also acts as a buffer state between India and China. But the Red Dragon hopes to break ‘The Wall’ and create a complete dominance over the region.

Let’s take a look at how, China poses an immediate threat to the sovereignty of our country via Nepal.

1.Tunnel through Mount Everest: -The major wall between China and Nepal is the Himalayas which has some of the toughest terrains in the world. With reports coming in from the Chinese state media of a railway tunnel under Mount Everest, it possesses an immediate threat to the security of our nation. It also helps the Chinese to dump their goods via Nepal route, which will make transportation easier to destroy the Indian Market.

2.Easier to cut Chickens Neck: -India’s northeast is connected via a narrow passage known as ‘Chicken’s Neck’ or the Siliguri Corridor. It’s the only narrow passage through which we access our North East with bordering countries like Nepal, Bangladesh, Bhutan and China. Cutting this small region from India will help China in taking over the entire 8 states of the North-Eastern part of our country.

3.Encouragement to Maoism: -Every country wants to encourage their Political, Religious and Cultural beliefs to the foreign country which will help the mass to forget their indigenous cultures and become a pawn to its master nation. India’s Naxalite groups have always taken some kind of a Direct or Indirect support from their master nation China. The ideology of a “Political power grows out of the barrel of the gun” by the Indian Maoists will turn the nation towards a civil war and break it into 100’s of Nation. The way it was when British came to rule us. Rather than China conquering one whole nation like India. It’s easy to encourage Maoism and break it into 100s of factions. Another factor to look out here is that Nepal is also a communist country, with its ideology lying towards Maoism, which is further helping the Chinese to gain traction quickly.

4.Water the lifeblood:-It’s assumed that the 3rd World War will happen over water and with key rivers of Nepal flowing downstream through the fertile plains of UP and Bihar, it is very easy for China to cut access to these rivers since they have already completed couple of their massive dams in garb of building hydropower projects.

5.Instability in Nepal is disastrous to India: -Nearly 5 million Nepali people are working in India. Any political instability in the country will lead to mass migration and the violence spreading like wildfire through the plains of UP and Bihar which will also subsequently affect Delhi. Madhesi issue during Bihar election can be taken as a good example.

Narendra Modi was the first PM to visit this Himalayan nation after 17 years, which subsequently pushed it towards China. Recently Chinese companies received the tag of “Preferential Policies” from Nepal, which shows that although things are better than the Manmohan era but still many things needs to be done by the current government to avoid Nepal falling into China’s lap.