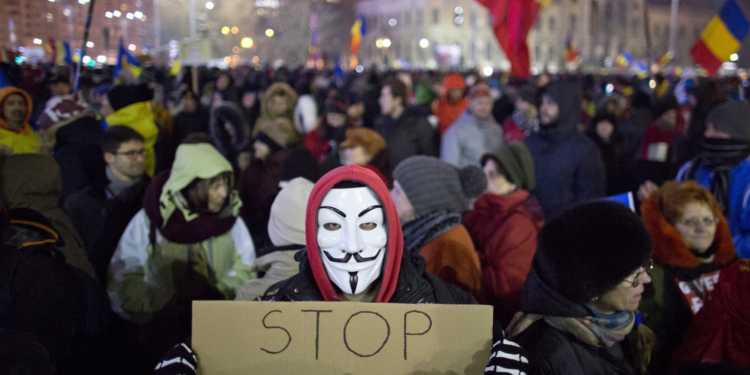 Almost a month after they started, protests against the incumbent government in Romania refuse to die down and Bucharest remains under the shroud of the biggest public demonstrations in the nation since the fall of communism and infamous dictator Nicolae Ceausescu in 1989.

The tumultuous period began back in January, when the newly-elected PSD (Social Democratic Party) government proposed to pass a decree that would amend the penal code, with two particular clauses of interest.

The first stipulated that all those serving prison sentences of under five years be released unconditionally, which the government justified by arguing for prevention of overcrowding in Romanian prisons in order to stick within European human rights norms.

Aside from the absurd aversion of justice this amendment would bring about, it also irked the population owing to the fact that many PSD members are currently convicted on corruption charges and that the decree would benefit most, if not all, of them.

The second would automatically grant pardon to all those accused of corruption or convicted for the same if the amount of money involved was less than €45,000.

The peculiar slab would decriminalise a certain offence and protect hordes of PSD donors and supporters, although one man would be the biggest beneficiary of all – Liviu Dragnea, the PSD’s leader.

In May of 2015, Dragnea was convicted of electoral fraud and handed a one year suspended sentence, which was later doubled, inspite of which he came to be elected as the head of PSD only five months later in October, another ode to the institution’s corrupt nature. But Dragnea is currently on trial for defrauding the state of €24,000, which, along with his sentence, legally barred him from taking power as Prime Minister once the PSD came out victorious in last month’s elections.

The proposed bill’s specifics were released to the public and immediately came under intense scrutiny from the Romanian Supreme Court and media outlets, leading to a quick response from the population.

Protests broke out on the 18th and swelled up on weekends, peaking out on the 29th, when the number of protestors came to exceed 300,000 and thus became the largest demonstration in Romanian history.

But Prime Minister Sorin Grindeanu’s government remained firm on its resolution and the decree went through, releasing a wave of outrage.

The manner in which the decree was passed didn’t help the situation either, for the government chose to circumvent transparency and instead approved the decree under the garb of an emergency ordinance, effectively taking away the right of parliament to vote upon it and that too during midnight.

Despite this, almost 20,000 emerged out their homes and marched toward the PM’s headquarters and Bucharest came to a halt yet again on the next day.

Throughout Europe, citizens of Romanian descent and expats too staged peaceful demonstrations, while thousands flew back to their homeland in order to join the protests, clogging Romanian air traffic.

The influx of protestors meant that the total number beefed up to 600,000 on the 5th of February, double that of the previous week, thus forcing Grindeanu’s cabinet to repeal the ordinance. Still, the demonstrations remain active despite the retraction, for the aim has now become to get rid of the PSD government itself.

The public’s willingness to brave sub-zero temperatures and protest for weeks in a row is a reflection of their discontent with government corruption that’s been rampant for decades and to a point where the role of corruption today in Romanian society is such that even menial tasks of day-to-day life can’t be carried out without bribery or the like.

Foreign embassies located in the nation’s capital have long been fervent critics of most government policies and the constant stream of criticism has become a source of embarrassment for Romanian diplomats and society at large.

They, along with the EU, which Romania joined in 2007, issued a stern warning and said that had the amendments to the penal code remained intact in the long term, they would’ve been detrimental to Romania’s long drawn battle against corruption that’s been active since the early 2000’s, any harm to which must be prevented in the future, fuelling the ongoing protests further.

Romania witnessed booming economic growth in the early parts of this century and fought an anti-corruption battle lauded throughout the world and heralded by diplomats as a role model for nations in a similar predicament.

Maintaining growth remained on top of the agenda for all those running for office, but some measures adopted for the goal proved to be harmful for the populace. Such was the decision in 2010 to enforce austerity measures, which was in order to make up for slowing growth in the aftermath of the 2008 economic crisis, but resulted in living standards for the lowest strata of Romanian society taking a further dip and the level of poverty rising to 30% – the highest in the European Union.

Global recession too affected the Romanian economy and proved tough to handle, resulting in a period reminiscent of post-communism times with high wage cuts and mass unemployment.

The public’s almost instantaneous action against the recent ordinance was, in part, due to their experience in expressing dissatisfaction against national institutions during the aforementioned period.

Political developments throughout the world in 2016 inspired interest in Romania and kept internal unrest to a minimum, in contrast to the period between 2012 and 2015, when the Romanian population was in a near constant state of protest against their leaders.

Tensions escalated and neared breaking point in October of 2015, when a nightclub in the nation’s capital named Colectiv caught on fire and killed 64 people.

The blame for the accident was heaped upon the local government for granting a permit to the club despite there being an obvious lack of safety measures and the incident itself was used as an example to show truly how widespread and entrenched corruption is in Romania. The explanation for why corruption possesses such a stranglehold over the Eastern European nation harks back to its dark past of the communist regime.

Communism in Romania was weeded out during the December revolution of 1989, when almost 300,000 people took to the streets in order to oust dictator Nicolae Ceausescu and the culmination of which saw him and his wife being convicted by a kangaroo court and later executed by firing squads.

Although the lack of a political vacuum in the revolution’s immediate aftermath was welcome, Ceausescu’s policies had ensured that the incoming democratic government wouldn’t posses the funds necessary to provide wages for a generation of public employees, while a majority of the general population’s produce had been hijacked and forcefully exported by Ceausescu in the late eighties to settle skyrocketing debt, leaving millions impoverished and the economic landscape in shambles.

Further, the communist regime had made sure that the entire adult population was employed and those not capable of gaining one on their own be provided a job in the government. Thus, the regime’s fall rendered millions jobless and hampered Romania’s production capacity to no end, while salaries of both private and public workers were drastically lowered.
It was at this point when the corruption endemic that now infects Romania took hold, emerging at first as a supplement to the low wages for workers and then becoming institutionalised and furthered by those with higher incomes.

Seeing as how all sections of general society were taking in stride corruption and bribery, the government too participated.

While the Romanian public became more idealistic and refused to damage their own nation’s economy, the government never came to change.

Undoubtedly, the current protests posses great historical relevance, though there are those trying to tarnish its importance.

Dragnea blamed the protests on the President Klaus Iohannis, claiming that it was the first stage of an organised coup to instate him at the nation’s helm. He went on further and made clear that his party’s government wouldn’t step down for they were responsible toward those who elected them.

And he was right, counter-protests began in the first week of February that saw the PSD’s supporters spill onto the streets – about 500 of them.

The crisis that now faces Romania is one created by its people and one which they won’t face alone as, in 2017, for the first time in a decade, all EU member nation economies are growing simultaneously, despite which Romania remains a bright spot and grows at the highest rate.

Though the EU can never stave off the sustained barrage of criticism which, at times, questions the organisation’s very structure, it certainly won’t let Romania’s hopeful future implode anytime soon.