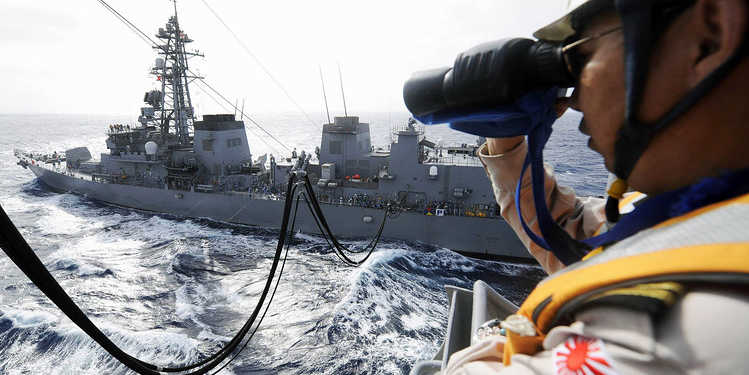 Japan is floating its biggest naval vessel to ‘test its capability’ by sending it to an ‘extended mission’ in South China Sea. The move is a challenge to Chinese high-handedness in South China Sea and may upset it setting up further military confrontation in the waters.

Japan wants to dispatch its largest warship, Izumo, for a voyage in South China Sea beginning May this year only to return back in August three months later. The naval vessel will traverse the waters starting from Japan while halting at Philippines, Singapore, Indonesia finally reaching Sri Lanka and thereafter joining the Indian and United States’ naval forces for Malabar joint naval exercise.

After the defeat of Axis powers – Germany, Italy and Japan – in the Second World War, Article 9 was inserted into the Japanese constitution barring ‘war’ as a means to settle international disputes. This constitution came into effect from May 3, 1947. However, Japan maintained a ‘Japan Self Defence Force’ under the United Nations for its defence.

Of late, under Prime Minister Shinzo Abe, Japan has been shedding its defensive stance. For the same reason it has designated Izumo as a ‘helicopter destroyer’ and not as an ‘aircraft carrier’ because aircraft carriers are considered offensive weapon since they have the ability to project force. This fine tuning in the nomenclature allows Japan to keep within the boundaries of the constitution, which forbids ‘acquisition’ of weapons which can be used to wage war, without its formal amendment.

Japan maintains that the move is to ‘test the capability’ of the warship when sent to ‘extended missions’ and it is only to train the U.S. Naval forces in the South China Sea.

Japan, however, has no claim to the South China Sea waters but is in a maritime dispute with China in the East China Sea. The decision to float the vessel in the South China Sea comes at a time when United States is already willing to ‘defend international territories’ against China over its aggressive militarization and artificial island building activities in the South China Sea which China claims ‘historically’ and the sovereignty of islands as ‘irrefutable’.

Maintaining the balance of power

Through the ‘Nine-dash’ line China claims nearly 90% of the territorial waters in the South China Sea which includes the disputed Paracel Islands, Scarborough shoal and Spratly Islands and has been increasing its military footprint to establish a blockade in the sea. The neighbours fear the once the sea is saturated with Chinese military presence they may be denied the freedom of navigation. Taiwan, Malaysia, Vietnam, the Philippines and Brunei also claim their part of the sea since it is rich in natural resources like Oil, Natural Gas and Fisheries and about $5 trillion of sea trade passes each year that could well power their economies for decades.

Japan wants to signal United States that it is willing to do more militarily in Asian waters and indicate them to keep their stakes invested. Some of the Asian partners of United States are in ‘strategic holding pattern’ and feel that United States is developing cold feet as far as Asia is concerned. United States’ acting Assistant Secretary of State Susan Thronton had said that the new Trump administration would do away with the Obama era ‘Pivot To Asia’ policy which meant a long term military, diplomatic and economic involvement in Asia-Pacific.

The 248-meter-long (816.93 ft) Izumo, the biggest warship since the Second World War’s Imperial Navy aircraft carrier, is a helicopter carrier with a crew of 470 sailors. Its acquisition signifies that Japan wants to expand its military capabilities especially with a receding United States’ Asian Policy. The 24,000 tonne flat-top helicopter carrier, unveiled in 2013, was finally put into service in 2015. It can manage a maximum of nine helicopters. The vessel doesn’t have a deck that can launch and land fighter jets but it allows Japan to project military power well beyond its territory.

Izumo and Kaga are the two helicopter carriers that the Japanese have built which they say are aimed at anti-submarine warfare, humanitarian aid and disaster relief operations. The threat of an expanded Chinese Submarine fleet had was the motivation behind Japan’s decision to develop the vessels.

Chinese Foreign ministry is still waiting for an official version from Japanese government and is unperturbed for the time being over the whole development and states that they are not worried as long as the ship was on a regular visit through the South China Sea and passing ‘normally’ through it. But if Japan had ‘other intentions’ then it would be different matter signifying that China was not willing to concede any space.

Taiwan, in a report titled 2017 Quadrennial Defence Review (QDR), has highlighted the impact of growing Chinese militarization of South China Sea and Japan’s proactive involvement in the regional geopolitics. It says that jets and ships in the region show the growing threat capabilities of China not only for its sovereignty but also for regional stability. The report also opines that Japan’s increased aggressive position will have a deep and far-reaching impact for the security situation in the region.

Vietnam opposed China’s move of sending nearly 300 of its men onboard a cruise ship to Paracel Islands. Hainan Strait Shipping Company of China had sent its first cruise to the disputed islands in 2013. The islands are claimed by China, Vietnam and Taiwan.

China wanted to gain access to Bay of Bengal and hence was cultivating its relationship with Bangladesh and Myanmar and had been strengthening its military ties with Sri Lanka to that effect. Alarmed with the expansion of the naval exercise, China sought clarification from India, United States, Japan and Australia in response to which it was assured that the meeting did not include issues like security and defence. Japan took part in the 2009 Malabar exercise held off its coast to which China didn’t raise any eyebrow and hence India was comfortable in allowing Japanese Maritime Self Defence Forces to participate in upcoming years. However India stopped involving more countries in the naval exercise when it was the host. The naval exercise of 2009, 2011 and 2014 didn’t take place in Indian waters and hence Japanese Maritime Self Defence Forces could also be invited to participate.

Come 2015, the United States’ President and Indian Prime Minister agreed in a joint statement to upgrade the Malabar exercise and invited Japan to train in the Bay of Bengal. This was the first time after 2007 when Japan came to Indian waters for the exercise. This joint decision could well be the result of growing Indo – U.S. ties and an attempted gesture directed at China for it’s involvement in South China Sea. Both United States and India want to counter growing Chinese power in Asia Pacific.

The Chinese Dragon is about to unleash war of waters, India is the immediate target