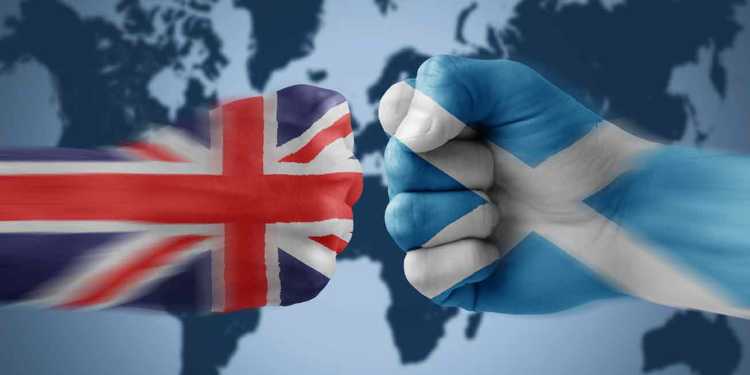 In 1286 King Alexander III of Scotland died without leaving any successor. So the crown passed to his three-year-old granddaughter Margaret (“Maid of Norway”) who succeeded him. It was a dark period of chaos for Scots when she too fell ill during the sea voyage from Norway to Scotland and died. A Game of Thrones dialogue “Chaos isn’t a pit. Chaos is a ladder. Many who try to climb it fail and never get to try again. The fall breaks them. And some are given a chance to climb; they cling to the realm or the gods or love. Only the ladder is real. The climb is all there is” best describes the mindset of the Scottish noblemen.

To make the best of chaos, thirteen rival noblemen staked their claim on the throne. To stop the situation from worsening the interim government (known as “guardians”) turned to King Edward I of England to choose the ruler of Scotland. When the opportunity is served on a silver platter only a fool turns it down. The King made all the rival noblemen swore him as overlord of Scotland which meant that the new king would be just a puppet. Blinded by greed the Scottish noblemen reluctantly paid obeisance to King Edward .There were two main contenders John Balliol and Robert de Bruce. King Edward III proclaimed John Balliol as the new king of Scotland.

What followed next were the bloody Wars of Independence against the English rule led by Scottish landowner William Wallace. In 1297 Wallace’s forces triumphed at the Battle of Stirling Bridge but lost at Falkirk next year. The English crushed the rebellion and executed Wallace in 1305. In 1306, Robert de Bruce VIII seized the Scottish throne from his rivals which England’s King Edward I never wanted. So he sent his forces to crush newly crowned king. Once again the Scots were defeated and Bruce’s wife and daughter were arrested. Not only this, his brothers were executed brutally but Bruce managed to escape. He rebuilt his forces and started guerrilla warfare against his English and Scottish enemies. Finally, at the Battle of Bannockburn in 1314 he emerged victorious and routed the army of Edward II.

A referendum on Scottish independence took place on 18 September 2014 in which the “No” side won, with 2,001,926 (55.3%) against 1,617,989 (44.7%) voting “Yes”. The results did not bury the hopes of Scots who wanted independence, they only deferred their dream. The pro-independence Scottish National Party which held a view before referendum that it was ‘once-in-a-lifetime’ opportunity is now demanding a second referendum.

Sturgeon announced she would seek Scottish Parliament’s approval to negotiate with the UK Government for a Section 30 order which would enable a second independence referendum. The tentative time suggested by her was between the autumn of 2018 and the spring of 2019, when the effects of the UK’s Brexit deal would be lucid. But Theresa May smashed hopes for the second referendum nicknamed ‘IndyRef2’.

According to her, Britain is already in turmoil post-Brexit and has much other important issues to focus on rather than engage in divisive fight. In her words “now is not the time” for referendum and Scots should stay united with UK. SNP never wanted UK to be out of European Union and its exit has given Scots a reason for confrontation with British government. Meanwhile, Secretary of State for Scotland David Mundell also confirmed that a request for a Section 30 order in the time period proposed by Sturgeon would be declined by the UK government.

Over 150,000 people have already signed a motion on the U.K. Parliamentary petitions website in opposition to holding a second referendum. The conservatives are dead against the referendum but the Labor party’s stand is equivocal on the issue. Its leader Jeremy Corbyn said last week that while he opposed a second referendum but it would be “absolutely fine” to hold one if the Scottish parliament vote to do so. Formally blocking a referendum is a risky move for the prime minister. By doing so, there may be an increase in support for independence. It may be catastrophic and devastating for her political future. However, referendum is a double edged sword. It would backfire if once again the Scots vote “No”.

The interval between the first and second referendum is too less and it’s less likely much has changed in the perception of Scots towards independence. In 2015 Alex Salrod, the SNP leader and former first minister of Scotland wrote a memoir “The dream shall never die” on first referendum for Scottish independence. The SNP must tread carefully in the milieu post-Brexit. If the SNP pursues its goal hastily it’s most likely to fail and the dream will die forever.