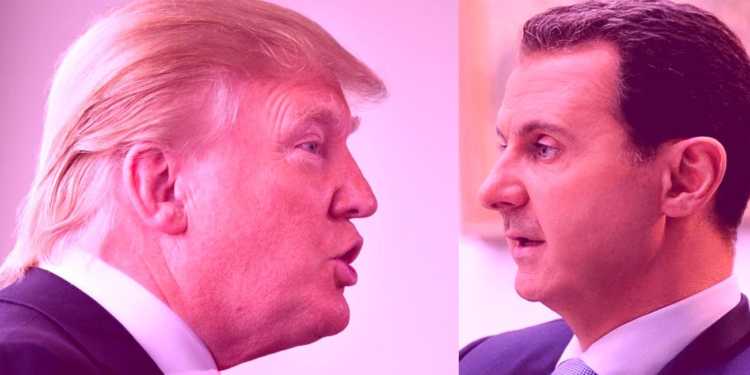 The previous week, a Chemical weapons discharge near the town of Khan Sheikhoun in Idlib province left over a hundred people, including several children, dead and many more injured. Coming almost exactly a year after the UN Security Council adopted a resolution to identify the perpetrators of Chlorine attacks in Syria within 12 months, this attack marked yet another escalation of the Anti-Syrian Government rhetoric that has characterized International media coverage of the Syrian Civil War. Multiple International Media sites- almost all holding allegiance to a Liberal outlook- have blamed the Syrian Government for these chemical attacks. The respected doyens of Foreign Affairs and Intellectuals across the World have added to this chorus with the usual old refrain- ‘Assad must go’.

Trump Government which was expected to have  a different plan for Syria has chosen to toe the lines of its predecessors. This is exactly why we must properly dissect this recent attack in order to comment upon it and establish why this attack is uncalled for:

And once we have done it, we will find that this chemical attack was merely yet another plot by the Global Liberal powers-that-be to push their odious ideology onto the civilized World. The Khan Sheikhoun attacks were nothing more than yet another hit job upon a Sovereign State by NATO and its Islamist-Liberal lackeys.

Let us consider the facts:-

Using Chemical weapons makes no Political Sense. Over the past year, the Syrian government has made several offences that have resulted in almost complete destruction of Rebel positions across the Nation- including many ISIS strongholds. Even now, as all of NATO struggles to capture territory against ISIS in Iraq, the Syrian military- with nominal Russian and Iranian help- has achieved major victories. It is very unlikely that the Syrian Government- which has been consistently winning using conventional weaponry, has vastly greater resources than the terrorists and rebel groups, and is looking to make peace with the Trump Administration- would suddenly decide to provoke global condemnation by using Chemical weapons.

Using Chemical weapons makes no Diplomatic Sense. The “Brussels Conference on Supporting the Future of Syria and the Region” is to be organized on April 4 & 5 at Brussels, where the Government of the UK, Germany, Kuwait, Norway, and Qatar will be in attendance. It has been a recurring and common ploy by Islamo-Liberal organizations to organize hit jobs on Sovereign Peoples as part of their propaganda ploys, before the start of important Foreign Meets. Readers might be familiar with various such incidents in India- so for the purposes of this article, we will focus on Syria alone. In 2013, the Ghouta chemical attacks occurred just as UN Inspectors were arriving at Damascus. In September 2016, yet another chemical attack took place on the eve of a major Opposition meet at London.

The Khan Sheikhoun Chemical Attack is nothing more than a rerun of the old Ghouta attacks story in 2013, where the Syrian Government was accused of shelling civilian positions with Chlorine- accusations that have been proved, for everyone who is not a Liberal lackey, to be verifiably fake. Barely two months ago, we at Rightlog had warned of successive propaganda campaigns against the Syrians by the global Media in our articles.

The creation of Atrocity literature is a vital cog in the propaganda machine that drives the Liberal narrative in Kashmir, Kosovo, Syria, and other war-torn regions where the Islamo-Liberals have spread their tentacles. In many cases, the actors are the same- Amnesty International, the hretc.

So what will the White House say: "Assad's chemical attacks are a political reality that we have to accept"? Their actions do suggest that.

But in case of Syria, there are other more focused figures. A prime example is the Syria Human Rights Observatory- ostensibly a charitable organization providing aid to Syrians, but in reality, a one-man operation run by a Rami Abdul Rehman from Coventry, England. Readers who are familiar with the working of dubious bodies such as the Coalition against Genocide- a group of over forty NGOs, most of which exist merely on paper, and work to demonize PM Modi, the BJP, Hindutva, and Hinduism in general in the West- will be aware of this model of operation.

The SHRO was the body falsely accusing the Syrian Government of Chemical attacks four years ago- and they have the ones doing the same now as well. Further, the SHRO is linked with the famed ‘White Helmets’. The latter are a noted organization, known for their Charitable and Medical work in Rebel held areas of Syria. As a result, they are often praised in Western and Indian liberal media- even though their links to Islamist organizations including Al Qaeda have long been known and reported upon exhaustively.

And there is plenty of evidence linking Syrian terrorist organizations to Chemical warfare as well.

Last year, the great American journalist and Pulitzer Prize winner Seymour Hersh- known for investigating American atrocities in Vietnam, Iraq, and Afghanistan- reported that then Obama Administration had falsely blamed the Syrian Government for Chemical attacks in a pretext to invade the Country, even though they’d been informed by the British intelligence that it were the Rebels who were using Chemical weapons. Hersh also accused Hillary Clinton of providing Sarin and other chemical weapons from captured Libyan stockpiles to the Rebel weapons, using intermediaries in Islamist Theocracies in the Middle East, as well as claimed that in 2012, a ‘secret agreement was reached between the Obama Administration and the leaders of Turkey, Saudi Arabia, and Qatar, to set up a sarin gas attack and blame it on Assad so that the US could invade and overthrow Assad.’

The murderous nature of these Islamo-Liberals must not be underestimated. In 2014, Lebanese-American journalist and mother of 2, Serena Shim was allegedly killed in a ‘car crash’, mere weeks after reporting on Turkish aid to ISIS as well as the existence of a warehouse holding alleged Sarin canisters operated by Ukrainian- thus, NATO- agents.
Even more disturbing- the chemical attack comes merely a few days after more than two hundred people were abducted by Al Qaeda from the nearby city of Hamas- a number suspiciously similar to the number of affected at Khan Sheikhoun.

There is no independent Medical aid teams at the spot, no third-party verification process. One of the primary Medical officers at the spot- and the Man most international media channels appear to be depending on for medical coverage- is a certain Dr Shajul Islam- a Pakistani Briton- who has long been struck off the Medical register for ‘undisclosed reasons’.

It is very likely that the Khan Sheikhoun attacks were an attempt by the Powers-that-be to force the Trump administration- which has been extremely anti-War on Syria, instead preferring to keep a close eye on Chinese concerns like North Korea instead- to go to War in the Middle East again.

France has been calling for a UNSC meet. The Israelis have been calling for more sanctions. Several prominent Republicans are known to be pressuring Trump to take a more hard-line stance on Russia. Among all these absurdities, the statement by Kremlin spokesman Dmitri Peskov that Russia will soon present data proving that an air strike struck a chemical arms production facility in southern Idlib at a session of the UN Security Council scheduled to discuss this incident, has been conveniently ignored by the Liberal media.

Only Time will tell what the faith of the World will be. As for Syria, the Liberals have all but destroyed it already.