Steve Bannon was the master of the game, until he met McMaster 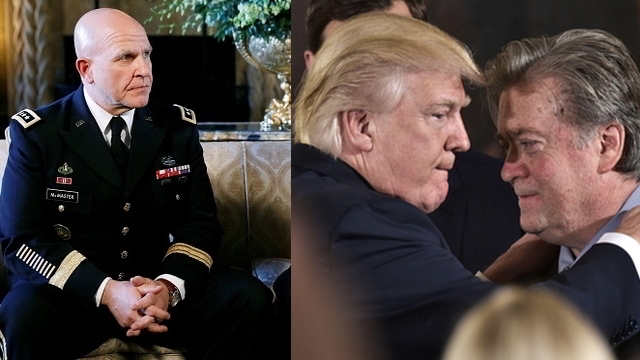 After the resignation of Lt. General Michael Flynn as the National Security Advisor in February 2017, the search for the new NSA ended with Lt. General McMaster replacing the former. It is well known that McMaster was not the first choice of US president Donald Trump, it was retired Vice Admiral Robert Harward who turned down the offer because he was not allowed to make choice of his team members in Trump’s Security Council as some reports have suggested. In others, the reluctance of Harward to be NSA was because of presence of political advisor Steve Bannon in the Security Council who was also a member of Security Council then and is said to have large influence on Donald Trump’s policies on immigration and healthcare.

Interestingly, few days back Trump removed Bannon from the National Security council and the antagonist in the story is McMaster.

McMaster was commissioned as a second Lieutenant in 1984 after he graduated from the coveted WestPoint Academy. He experienced both Iraq wars – the Gulf war of 1991 and the Iraq invasion in 2003 which led to the downfall of Saddam Hussain and the infamous Ba’ath party in Iraq.

McMaster also played a pivotal role in the fight against Al-Qaida in Tal-Afar city of Iraq. He has proved himself as a commander who has the courage of a lion and the cunningness of a fox. In the Gulf war of 1991 McMaster commanded tanks at the battle of 73 easting in which his division was outnumbered by the Iraqi Republican Guard tanks.

It was the shrewdness of the McMaster that his division destroyed about 80 T-62s and T-72s soviet era tanks of Iraqi army and that too without any loss. He was awarded Silver Star for his actions in this battle. McMaster has also served as professor in West point military academy from 1994 to 1996.He has also served with General James Mattis who is now the United States secretary of defense on line of duty in Iraq.

McMaster has reputation of being outspoken in political and military circles. When he completed his PhD from University of North Carolina at Chapel Hill, he wrote his thesis on Vietnam War. It criticizes the high-ranking officials of the US president Lyndon Johnson administration who failed to devise a successful strategy against North Vietnam which in the long run proved fatal and led to the fall of Saigon resulting in loss of United States of America. After the war the North and South Vietnam were united and a communist nation was established which was against the world order imagined by the United States. His thesis was converted to a book Dereliction of Duty which is taught in various military schools of the world.

The ouster of Steve Bannon came as a shock to many because he was a permanent member of the Security Council and had large influence over the policies framed by the Trump administration. According to some reports, his ouster is the result of the power play at White House. Lt. Gen. H. R. McMaster, Trump’s national security adviser had insisted on purging the political adviser from the Situation Room where decisions about war and peace are made, since the day he became National Security Advisor.

Some media reports suggest the hand of Jared Kushner, Trump’s son-in-law who has become quite critical of Bannon’s policies. This could point to a significant shift in White House power relationships with Donald Trump swaying away from Bannon’s ideologically driven team. There may be a return of National Security Council meetings attended by Cabinet members, senior intelligence officials and the chairman of the Joint Chiefs of Staff but with a dominant National Security Advisor at the driving seat, in place of haggard political advisor who had no experience in security affairs. Bannon’s supporters in the White House reasoned that his ouster did not amount to a demotion because Bannon had rarely attended NSC meetings and it does not mean a loss of confidence in Bannon by the President.

However, Bannon’s security downgrade is the perfect opportunity for McMaster to cement his role of ‘hand of king’ to President Donald Trump. McMaster has kept a low profile ever since he became NSA and has quickly earned the confidence of some in Trump’s inner circle. It does not mean the war is won by the general. Apart from Bannon there are numerous challengers to McMaster in the White House.

It would be interesting to see how McMaster faces these challenges and adjusts himself in the Trump administration as he is apolitical and is not known to favor any political party in the presidential elections. As an army man McMaster can help President to shape policies without any bias and prejudice. There is no doubt that he is now a knight in the game played at white house who has to play internal politics, safeguard himself from the vultures of power and keep his nation safe from any threats whether at home or outside.

China may not like Dalai Lama’s Arunachal’s visit, but they cannot do anything