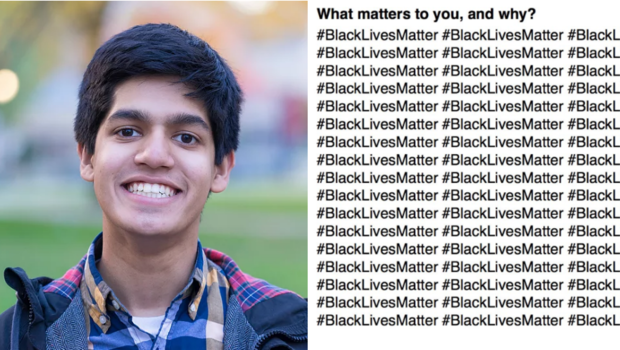 Without much ado, let’s listen to this great story.

Bangladeshi American student Ziad Ahmed was asked about what does he care about and why in application form of the prestigious Stanford University. His answer was #BlackLivesMatter a 100 times and the amazing part of this WTF story is that he actually got selected.


I submitted this answer in my @Stanford application, & yesterday, I was admitted…#BlackLivesMatter pic.twitter.com/R5YxM77bWL

Liberals celebrated Ziad Ahmed ‘s admission into Stanford as a victory for democracy.

When pointed out that there are many other students with higher scores and better resumes who deserved a seat in Stanford, Liberals argued that Ziad was selected based on his impressive resume not due to his political and radical afflictions.


His profile on Twitter is ‘Ziad the activist’ , his biggest accomplishment was apparently co-chair of youth for martin O Malley( a Democrat) , after O Malley lost Ziad latched on to Hillary Clinton as an activist, after Hillary lost he joined resistance against Trump. He started a youth consulting firm and a gender equality group, but both actually exist only on paper.


Ziad Ahmed could not believe his eyes when he saw his acceptance letter . He said that its quiet refreshing that colleges are viewing his unapologetic activism as an asset rather than a liability.

Imagine the kind of rage that we would have witnessed if some student had written ‘Death to all Terrorists’ or ‘ Make America Great Again’ a 100 times in their essay in stead of black lives matter and Stanford would have admitted them.

The Indian equivalent of this story would be ‘Kanhaiya Kumar’ getting admitted into IITs or IIMs because he wrote ‘India is intolerant’ a 100 times in his essay.

You might be feeling WTF after reading this story but I guarantee you, we haven’t seen the last of this kind of story. Mark my words ‘’Student accepted into JNU” after he has written hume chahiye Azadi, Modi is not my PM, India is intolerant, I feel grief without my beef on what does he care about and why in application form. We would even hear secular parties doing dharna in the future if students didn’t get seat in JNU after writing such random nonsense.

Thank you America for once again starting a maddening new trend.

Steve Bannon was the master of the game, until he met McMaster