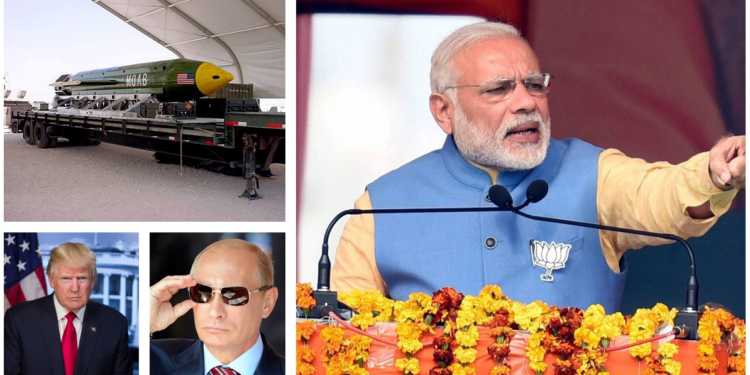 The news of dropping a bomb at Afghanistan-Pakistan border left the world in a shock. In the latest news, the USA has dropped the largest conventional bomb on a cave complex of Islamic State in Afghanistan this Thursday. Believed to be a ‘Mother of All Bombs’, this heavy bomb had to be dropped at the target from the rear of the cargo plane, unlike the conventional practice.

I was curious in knowing more about this bomb attack and my findings reveal that this is a GBU-43B Massive Ordnance Air Blast (MOAB). According to the official statement released by the USA military, the target was a tunnel complex in the Achin district of Nangarhar province bordering Pakistan.

At this point, it has to be noticed that the use of such weapons had been prompt in past by the USA in an attempt to destroy Taliban and Al-Qaida. The idea was to destroy the enemy camps which could not be reached by any other weapon. It was imperative for me to point this here to emphasize on the feature that IS is in the footsteps of Taliban and Al-Qaida. However, it is also mandatory to realise that world powers are well acquainted with the change in the nature of foe in Afghanistan. This is the reason why Adam Stump, a Pentagon Spokesperson has elaborated more on the bomb. In his words, this strike made use of first warfare use of MOAB which is supposedly the updated version of the bombs used earlier.

After being claimed to be a “very very successful mission” by the POTUS, US commander in Afghanistan throws more light on the use of GBU-43B on the IS target site. General John W Nicholson reflected on the use of IED, bunkers and tunnels to ‘thicken their defence’ by the IS fighters in the region. He was referring to the use of improvised explosive devices in his statement announcing the strike. He further added that “This is the right munition to reduce these obstacles and maintain the momentum of our offensive against the ISIS-K”

It is very important for the reader to understand and acknowledge that IS has been resorting to the latest technical weapons in its fight. At the same time, the modern militaries of the world are also expanding their domain in the advanced war tactics. I will avoid predicting the implications of the same leaving for you to figure the messages between the lines.

Although it is still not clear if there is a loss of civilians’ life in this attack, but the world media is quick to derive a conclusion predicting Afghanistan to be a new theatre of the Russia-US rivalry.

It is even more talked about in our country fearing construction of a new Syria in the immediate neighbourhood of India.

In this series of events, it is further essential to look at the activist role of Russia in this episode. Russia hosted the third meeting of the respective countries on Taliban and Islamic State and the reports from same are yet due to arrive. USA’s parting from the meeting despite its NSA in Kabul is set to increase the tensions between the US and Russian administration.

Mr Deepak Mittal, Joint Secretary in the MEA is set to represent India at this meeting. It is believed that alike last meeting, India and Afghanistan will again find themselves in a lonely corner. Russia-Pakistan-Iran-China nexus is set to dominate the issue and seek a “peace deal” with Afghanistan including Taliban in some form. What must be further troubling Indian authorities is the desire of Moscow to seal the deal with Taliban. This is surely going to put Pakistan in the driving seat making future developments tough for New Delhi.

This meeting, on one hand openly denotes the USA-Russia rivalry and on the other delivers a clear-cut message to China from Moscow. Putin wants Beijing to understand that no matter how fairly they are growing but the region will see Russia as the dominant power.

In this blame game between Russia and the USA in name of Taliban-IS, India has got to worry.

It looks like that Putin wants to take his country back to the cold war days. This will be leaving the USA with no option than to abandon Afghanistan and let Taliban exercise the control over the country. New Delhi is also looking up at Trump to kerb the rising status of Iran. It seems like that President was correct in stating that lifting the sanctions in Iran has created trouble for the democratic countries of this world.

In this ongoing drama of Afghani theatre symbolising Russia-USA vying, India badly needs to take an initiative in this direction. Clearly, India has more to say on Afghanistan while Pakistan is nothing but a puppet playing in hands of others. We need to assert out authority on the matters concerning the security of this region.

However, Indian strategies will be mainly depending on the role of Russia since Moscow is worried that an expansionist US and equally expansionist China could trample all over Russia’s strategic backyard. With US NSA set to be New Delhi, the proceedings can be very well governed by Mr Ajit Doval on Indian interest and position in Afghanistan.

If we are to look at the bigger picture, what makes me term it to be a theatre is not just the existing tussle between the two world leaders but also the substantial presence of Taliban. It is clear from the statements of the US commander that the threat is not majorly about IS but it is still the Taliban in this region.

It will be interesting to follow the response of the Afghani President Ashraf Ghani to the recommendation made by his counterparts in the nexus of four countries as well as the USA’s point of view. Undisputedly, the next steps, in this case, are dependent on these two.