Did America hack into North Korean systems and bring down its missile? 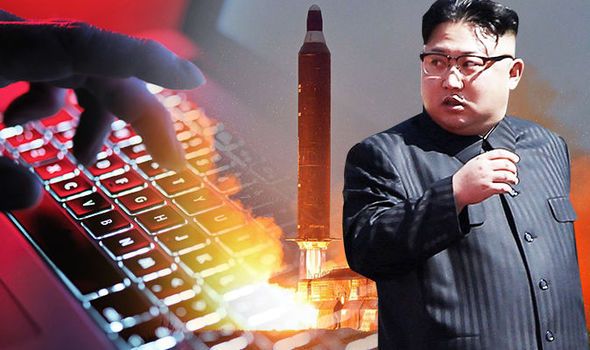 In the wake of US bombing of Afghanistan caves with Mother of All Bombs, (which, believed to have eliminated hundreds of IS terrorists & Pakistan agents in one stroke) and the recent humiliating failure of North Korea’s missile test launch and all, the trepidation of ‘cyber warfare’ has once again surfaced.

Last year some experts had predicted that the year 2017 is going to be the beginning of ‘cyber war’ in the backdrop of Syria/Iraq/Russia imbroglios. North Korea’s Kim Jong-un ‘s ambitious ICBM test launch on last Sunday, has ended in humiliating failure. It blew in flames seconds after the launch.

Kim Jong-un, is known for his homicidal attitude and ruthlessly eliminating his trusted lieutenants. In this modern age, Kim Jong-un is reminiscent of Adolf Hitler or the bigot Mughal King Aurangzeb. Kim Jong ignored the warning of US President Donald Trump and went ahead with the launch of the ICBM (yet disputed), but the launch was failed, much to his humiliation.

It is believed now, that this failure may be, the result of a Cyber attack by the USA.

The missile was NODONG ( a single stage, mobile liquid propellant medium range ballistic missile developed by North Korea. Developed in the mid-1980s, it is a scaled up adaptation of the Soviet SS-1, more commonly known by its NATO reporting name “Scud”) (Source:Wikipedia).

The missile technology was though not 100% indigenous to North Korea, the high-tech electronic instruments were all imported from the west.

Here is the catch.

This supply chain of high-tech Electronics were all passed through the US agents and undetectable malware viruses were possibly planted by the US agents in the missiles through supplied Electronics. When the launch was ready and got confirmation, a signal could have been delivered to the infected component via satellite from the US National Security Agency headquarters in Maryland.

What Defence analyst Paul Beaver said is unbelievable and shocking too.

“It is perfectly feasible the US brought down this missile’.

“As soon as military satellites watching Sinpo detected an imminent launch, a team at the National Security Agency would have got to work.

“It’s possible for them to have sent a signal directly to the missile from Maryland which effectively zapped it out of the sky.

“North Korea has had a string of launch failures and it may be no coincidence that they have happened as the US went to cyber war.”

Mr Trump, who in recent days launched cruise missile attacks on Syria and a huge bomb strike against ISIS in Afghanistan, was uncharacteristically silent following Kim’s missile flop show. Besides the ingenious perforation of the malware into the launch system, the US President Donald Trump’s silence on the launch failure is more divulging. This is certainly strengthening the fact that it’s a cyber attack.

In 2014, the then President Obama had ordered to step up cyber interventions to thwart North Korea’s efforts to conduct missile tests. Ever since the US cyber warriors are on war foot and the last Sunday’s missile launch failure in North Korea, could be their latest towering success. Because Cyber warfare is such a kind of war game, no nation can openly claim it’s role and success of it, chest-thumping. At the most, they can only hint about their role in it. This is what a US foreign policy adviser travelling with Mr Pence has reportedly said recently.

This is clear indication of US first-hand admission into their role in the recent North Korea’s missile failure on Sunday. The Cybercom was given a huge funding increase to create 27 “Combat Mission Teams” to attack enemy computers. Other medium-range North Korean rockets crashed and burned earlier this month and in March. This is an indication of unsuspected continuous cyber attacks on its missile launch station by the US.

Last year a Musudan missile fired to mark the anniversary of the birth of Kim Jong ’s grandfather Kim Il-sung blew up in air. In November 2015 a ballistic missile from a submarine disintegrated under­water.

Cyber attacks can be carried out in several ways:

The year 2014- The infamous North Korean cyber attack on south Korea’s more than 140,000 computers at 160 South Korean firms and government agencies, planting malicious code under a long-term plan laying groundwork for a massive cyber attack against its rival is a landmark one in Cyberwar history. This enabled North Korea to steal enormous Industrial and Military data from South Korea.

As early as in 1996 Russia gained access into a NATO computer network in a most unsuspected way. This is similar to the recent US access to the Korean launch system on last Sunday.

What Russian’s did was simply pioneering. The New Yorker detailed one case.
It detailed saying ‘Russia gained access to a NATO computer network in 1996 by placing bugged thumb drives for sale in local shops near a NATO base in Kabul, Afghanistan. NATO operators bought the thumb drives, used them on the network, and just like that, the Russians were in.

There are a number of reported Cyber attacks in the past. The above is only a glimpse of it.

HOW IS INDIA PREPARED to play a role in international Cyber Warfare?

There is no dearth of talent in India. A determined Government of the day can mobilise the talent and form a cyber warrior group, I mean an accredited one reporting to our IB directly.

Prime Minister Narendra Modi and his able team should immediately constitute a high-profile committee to devise a methodology and mobilise India’s talent within to form a formidable Cyber warrior troupe coordinating with National Security Advisor. The following establishments can be roped in to.

Cyber warfare is a reality; it’s here; it’s time for India to strengthen it, by all possible ways.