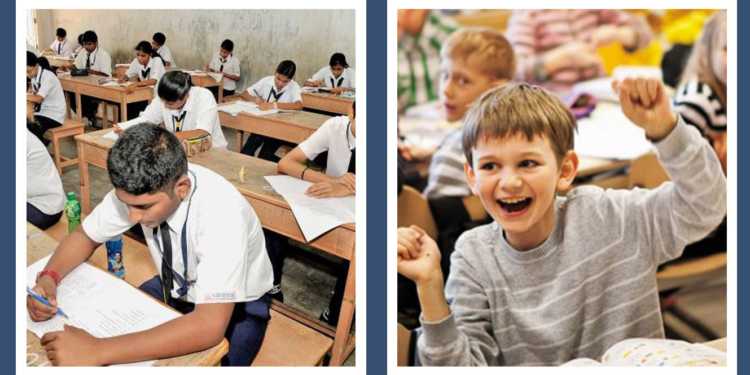 The Clock ticked on, the chalk was being decimated to mere particles on the black board, the pens were scribbling, page after page was being filled, yet no one had any clue about what was being taught. The routine would have said that the students were taking a class of “Fluid Mechanics”, but in truth it did not really matter, it might well have been a class of Dutch or Quantum physics, it would hardly have made any difference. A question to the students about what they were learning from this course would either have been greeted by a wry smile or an inscrutable face, an expression that a sloth might have been proud of.

When teaching becomes a system of listening and writing instead of understanding and applying, then it should be concluded that education has failed its mission and the system is spiraling downwards.

Education is an exceptional case in India, totally unique in its very existence, what makes it so peculiar is that, apart from it, there may not be a department that garners so much attention yet remains completely oblivious, totally neglected by the majority. Thousands of crores are being invested, schemes are being made, plans are being formulated, commissions have been set up, yet it all comes down to the fact that the student at the end of it all remains dejected, utterly disappointed and lost.

There are no magical solutions to the problems that our educational system is facing, like everything else in country; the major causes working behind the scenes are Corruption, incompetency, lack of vision and insightful thinking. To the credit of the government, the situation has improved indeed, we have come a long way, from being a country that was more famous for its snake charmers, we have carved out a niche for ourselves in the IT. Yet, one can’t help but feel that the growth has been too slow and too little for a country vying to be a superpower.

All the preaching about the system aside, there has to be some matter to back up the talk. How do we even compare students of different nationalities? The answer is quite familiar, by taking a Test!

PISA also known as Programme for International Student Assessment is a global examination.

The sole purpose of PISA is to compare the level of primary education amongst pupils across different nations, so far this test has been organized 6 times & yet India has participated in just one test, back in 2009, the results reflected that our system was in tatters and our performance on the global stage was dismal, to say the least. The students were tested across 3 disciplines i.e. Math, Science and Reading and 74 countries had participated in the programme, the results showed that Indians could outperform none but one nation.

In retrospect, the reasons are crystal clear, our educational system emphasizes Results over learning and understanding of the subjects, and rote learning is a never ending practice.

Speaking strictly in terms of numbers tells us that our higher educational system is no better, according to a study published by the Times magazine, no Indian University could make it in the list of the top 200 universities in the world, so much so for the all the throat cutting competition to get to these so called “Top Universities”. What makes the situation even worse is that this ill treatment of students doesn’t end even after school, baring a few colleges, the students are trapped in a vicious cycle of securing good grades that might lead to a good job and a secure future, amidst all this, thousands of bright young minds settle for mediocrity, when they could have achieved so much more.

A look across the seas tells us that the world has come a long long way and we have lost a lot of ground. But the situation is not all gloomy, Institutions like IISC-B shine like a bright spot amongst all of this, setting an example for the others to follow, the reason behind their success is their dedication towards research in pure sciences & they have not let themselves get distracted from this goal with expansion of the courses, IISC-B has valued quality over quantity, the driving force behind its success.

Amongst the countries that frequently top the PISA rankings, a few patterns can be observed.

Finland has made waves around the world for a near utopian system, where excellence is achieved without subjecting the students to stress, without ranking them.

On the contrary they seek to eradicate the very fundamentals of grading, a Finish student does not even take a test till he/she reaches the age of 16, yet they outscore the rest of the world, the reason is that they study to learn, not to score good marks, and definitely not to outscore the kid in the neighbourhood. Another distinguishing factor in the case of Finland is the respect for teachers, on the grounds that it is quite tough to be one, there are only 8 universities that award the Masters programme that is mandatory to become a teacher and only 1 out of 10 applicants is taken in.

Looking in the neighborhood, we have our own Singapore, home to a very culturally diverse section of people. (Sound similar?)

Well that is where the similarity ends, a country half the size of our national capital New Delhi, is outperforming India in all the departments. This can be attributed to the hard work of the Singaporeans, their meticulous planning and most importantly their ability to change with time. Singapore has understood that in these times, without the introduction of technology in the classrooms, the students cannot be fully engaged, ergo they have taken the platforms like Facebook, WhatsApp etc. and integrated them into their own methodology, using them to interact with the students in the class & thereby solving the problem of communicating with all the students of the class at once.

Singapore spends 20% of its budget on education, and such is the importance given to teaching that in a country where land is equated to gold, the government has allocated 16 hectare of land to teacher development centre, the most striking aspect regarding Singapore is the constant effort that the educators put in to update themselves with the current generation of students, they have realized that they cannot follow the outdated methods with the students, otherwise they risk losing the attention of their pupils. Teachers in the Singaporean schools constantly interact amongst themselves and to the educators across the globe to usher in new ideas to make the classroom more engaging and the learning experience more fruitful and this method has bought them tremendous success and made them the envy of countless countries.

In the Baltics, lies a former Soviet Nation by the name of Estonia, home to roughly 1.3 million people, and the country that gave us the mighty “SKYPE”.

Like the before mentioned countries Estonia also scores very high in the PISA test, but what separates them from the rest of the world is their affinity to Programming. In the 1990’s Estonia came up with a program Tiigrihupe, the aim of this program was to develop technical education amongst children at a very young age. A part of their national budget was allocated to this program as back as 1997; the visionary behind this movement was Toomas Hendrik IIlves, the future president of the country. What makes this plan so special and unique is that, Children are not trained to be consumers of technology rather they are taught and inspired to be the creators, Children are introduced to coding as early as first grade. Estonians have taken a very big step by connecting all their public schools with the internet.

Estonia has inspired counties like UK, Denmark & Australia to include programming into their curriculum as early as primary school. The future is going to be technology reliant and Estonia is equipping to be on top of the chain, and they will surely reap the rewards very shortly.

The Dutch students are the happiest in the world, despite the fact that most of them attend public schools, have very less homework and shorter study time, yet they outrank majority of the world and perform fabulously.

There are a few obvious conclusions that we can make from all these countries, for all of them share few common points that make them what they are. They have understood that, Quality is far more important than quantity, that excellence is a matter of choice and it can only be achieved by a proper structure, they have come to the conclusion that the Teachers are as important as Engineers and Doctors, and they should enjoy the same level of respect and stature in the society. As the great APJ Abdul Kalam once said “teachers are the backbone of any country, the pillar upon which all aspirations are converted into realities”.

There are many a things we can learn from the rest of the world , in this era of globalization, knowledge can’t be local it has to be global, India has the potential to be a super power, it may still become one, but if we can tap the resources properly the time for the transition will be reduced tremendously.

There are some serious issues that have to be addressed for us to move forward, we don’t possess a magic wand that can be waived so that we go “VOILA” and the problems will be solved. It is going to be a long & tedious ride, but we have to make sure that it’s rewarding because the stakes here are high & the prizes on offer are mammoth, all we have to do now is take a step and the rest as they say will be history for the world to marvel at.