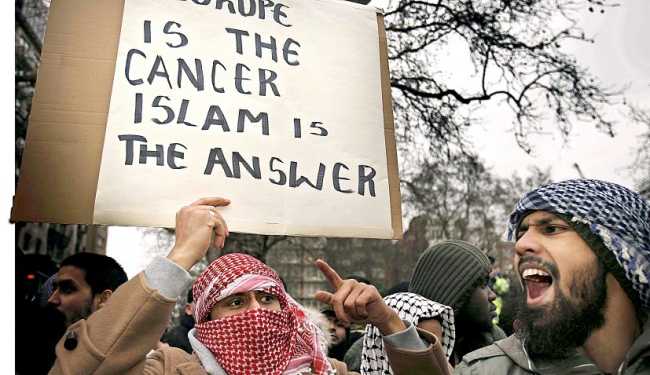 LONDON - FEBRUARY 03: Muslim demonstrators hold banners at the Danish Embassy on February 3, 2006 in London. British muslims have condemned newspaper cartoons which first appeared in a Danish newspaper, some of which depict the Prophet Mohammed wearing a turban shaped like a bomb. The cartoons have sparked worldwide protests. (Photo by Peter Macdiarmid/Getty Images)

Not for no reason did Gaddafi once comment, ‘We have 50 million Muslims in Europe. There are signs that Allah will grant Islam victory in Europe—without swords, without guns, without conquest—will turn it into a Muslim continent within a few decades’.

Data shows that Europe’s population in 1950 was around 550 million. From that level, it is expected to rise to around 745 million in 2020, before the effects of ageing and falling fertility rate start showing. By the year 2100, Europe’s population is expected to dwindle to 645 million. The total fertility rate of European Union was 1.58 children per woman. This is way below the natural replacement rate of 2.1.

Sample this, 30% of young German women don’t want to have babies. 48% of German men under 40 do not think children are needed for a happy life. Clearly, Europe is caught up in a ‘Low Fertility Trap’ and is unwilling to extricate itself from the mess it finds itself in.

This in turn would decimate Europe’s economic might. One way to counter that is to encourage immigration. Unwittingly, this is a path that most European nations have chosen. It is like choosing the proverbial Devil when faced with the deep sea.

From 1980s and perhaps even earlier, Europe started encouraging skilled and unskilled immigrants. The civil war in Syria and ISIS’s campaign in the Middle East moved Europe to tears and led by Merkel, it started welcoming immigrants in droves. As per estimates, Europe welcomed at least 700000 immigrants in 2016, twice the number in 2015. Unlike immigrants of yore, who moved to Europe in search for a better life and acculturated themselves with Europe, the new wave of immigrants came with their own social and cultural orthodoxies, viewed European life as evil and forced Europe to change its social and cultural mores to make them feel welcome. This has given rise to tensions across Europe. The growing strength of Marine Le Pen in France, AfD in Germany, Ultra-right in Scandinavia and other parts of Europe can be attributed to Europeans feeling unwelcome and unsafe in their own homes and hearths.

France’s Muslim population is around 7-9% of its population.

18% of new babies being born across France are being given Muslim names. In Belgium, top 7 baby names were all Muslim. Whites are expected to be a minority in Birmingham by 2026. Forecasters predict that Muslims could outnumber non-Muslims in France and Western Europe by 2050. All these predictions are expected to be conservative because no one really knows what shape immigration will take. Studies indicate that second and third generations of Muslim immigrants are proving notoriously hard to integrate. This manifests itself in violence and arson as was witnessed in France’s Banlieueus in 2005. Not only this, many Muslims are susceptible to radicalization given the nature of sermons being delivered at Mosques across Europe. It is pertinent to note that France sent as many as 1700 persons to fight for the ISIS, Germany sent as many as 800, while tiny Belgium tops the chart for most persons per capita sent as ISIS fighters. Not without reason did NYT refer to Molenbeek in Belgium as the Islamic state of Molenbeek, 41% of which is Muslim. Parts of France, UK, Belgium and other European countries have been converted into No-go zones, while the governments have done nothing.

The idea of Europe, as it was earlier known, is under threat. Not from immigration or changing demographics but the unwillingness of Europeans to comprehend the ferocity of challenges they face. Politicians are asking people to get used to living with terror strikes, violent crime has become common, parts of Europe are now as unsafe as some streets in Asia and Africa. On the whole it seems, the European civilization is beating a hasty retreat.

On 10th October 732, Charles Martel defeated a Muslim army near Tours, stemming the advance of Arab armies from their base in Andalusia. In 1683, the Ottomans were decisively beaten back at Vienna and ‘ceased to be a menace to the Christian world’. It seems now the history is repeating itself except that it is the Europeans who are on the losing side.