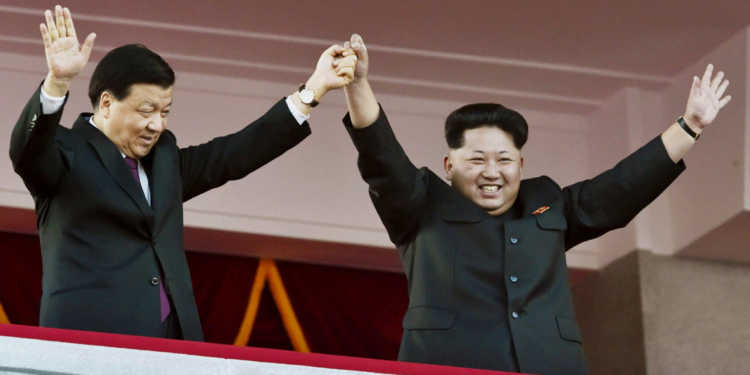 Is it not foolish to feed a snake with milk and expect it only to bite your neighbor? Seems this is applicable even to international politics, a fact that China has learnt recently. North Korea, the other pet of China has snarled showing its canine teeth at its master. After all, humans are not dogs to be faithful on permanent basis and at times, the real traits would come out.

Like the Don Corleone, it seems Donald Trump’s administration has made an offer that China could not refuse. After all, electing Cowboys donning three piece suits and do business across globe may be having some advantages. The communication would be a clear one, void of the diplomatic camouflage so that the message is received and only the intended meaning is understood.

Last month Vice President of United States, Mike Pence summed the situation when he said ‘The era of strategic patience is over’. America wanted China to exercise the leverage it has over North Korea to ensure Korea stops conducting further nuclear and missile tests. ‘If you don’t we will do it’ was his simple statement.

His boss, who considers himself President of ‘The Earth’ had put all his business expertise when he tweeted “Why would I call China a currency manipulator when they are working with us on the North Korean problem? We will see what happens”. Well, the proverbial carrot and stick are used to control the panda. But, like the Panda that became Kung-Fu warrior, all China wants is something that can fill its ever expanding stomach, which in this case is the access to American markets.

After tasting the American carrot, China started to employ Chinese version of ‘Carrot and Stick’ policy with North Korea. One thing Chinese are good is in working overtime. The atmosphere in China over North Korea had become so charged in a short span of two to three weeks, they forced Kim to blink.

Having a battery of paid journalists and an official mouth piece to escalate the progress; China started acting like a maid in trying to woo the ol’ boy Trumpy. Digging into recent past, these scholars found that there were no bilateral meetings between China and North Korea at ‘leadership’ level. It is also noted that despite the diplomatic communication between two countries was smooth, strategic mutual trust is scarce. If China don’t trust North Korea, who would? I don’t think even Kim Jong-un trusts in scientists and engineers and let them handle all the experiments, if not for the Chinese support.

But, the Chinese are in a quandary and could not come to a conclusion whether to side with America or with North Korea. China may be ready to implement severe financial sanctions against North Korea. But, that is where their support to US would limit. Can such sanctions force Korea to abandon its nuclear ambitions? Probably not.

So, China expects US and South Korea to act against the North Korea militarily.

How strong such an action would be? If the American action is light, Kim will retain his might and Seoul would face retribution for the misadventure they did along with Americans. If the America-South Korea coalition stuck North Korea harder, would China remain a spectator? Probably not. China will invoke public opinion and try to save North Korea from the harsh American onslaught. The ground for such an action was already prepared, by reminding its own people about the Chinese blood that was spilled earlier in Korean land.

Is China then speaking with two tongues? No. All China is doing now is testing waters. This is one advantage of having many versions of same topic being discussed in one – official forum. There is no doubt that some of the thoughts that were discussed in Chinese forums have been originated in American minds. Reciprocating to the threats emanated from Pyongyang that North Korea may conduct ‘Pre-emptive’ strikes on US, America had already stated they are not interested in regime change in North Korea.

Though North Korea’s statement seems to be too funny to be taken seriously, it almost reminds of the Japanese’ misadventure at Pearl Harbour. However, it is a welcome change to note there is finally a change in regular American philosophy of changing regimes across the world. Maybe they learnt their lessons, after all. In the entire tripartite dialogue, this is the only sane and comforting statement.

It is interesting to note that how two sides argue on the topic in the same platform – Global times; while both opinions are controlled by the party. This is a good way to gauge public mood so taking a stand against it may be avoided, especially in matters concerning War. While Chinese were probing how South Korea had not remained not so saintly, Trump made an offer even Kim could not refuse; that of meeting the dictator.

One Chinese gentleman discovered many of eastern cities fall in the reach of missiles of North Korea and so the need to contain the Korean armament expansion. Immediately, North Korea is not only a threat to Korean peninsula, but even for China that mostly lives in eastern shores. It was detailed how the northeast provinces of China are affected by the nuclear tests conducted by Pyongyang. It was discussed how to contain North Korea and to what extent military might be used.

[In fact, similar tirade against India not joining CPEC and OBOR too was conducted by Global Times, including a warning that China may try to meddle in Kashmir problem too. All its provocation was met with a stern silence from Indian official establishment and China had to declare officially that they are not interested in mediating between India and Pakistan.]

Number of articles in Global Times has finally touched the nerve of North Korean leaders, and they did respond. And when they responded, it was the turn of China to be shocked for they never expected their own dog to bark at them! Why not. Using its official name DPRK, it advised Chinese not to test limits of their patience and warned of ‘grave consequences’ if any ‘reckless’ adventures are undertaken by the bigger ally.

Now, it is the turn of China to react. Though the media houses have underlined how North Korea has undermined the capacity of China, Kim has got his much waited official response too. Spokesman Geng Shuang responded to the commentary in KCNA, which is the official, but independent (that’s how they call themselves in authoritarian regimes) media establishment of North Korea. ‘Beijing has a consistent and clear policy of developing good neighborly and friendly relations with North Korea’.

Does it mean the storm that was fought over internet between both neighbors is over? Well, only time will tell. Meanwhile, Global Times wants its readers to believe ‘people’s opinion’ on North Korea has changed post such a direct threat against China. A great U-turn that may ignore the Chinese blood spilt in Korean land. But, that is how propaganda works and authoritative regimes knew too well to control media – by keeping them independentJ.

All said and done in the last one month, one silver lining in the entire episode is Trump could successfully convey the opinion of US to Kim, albeit through China, which is a first in recent past – especially without firing a bullet, a normal American practice. However, considering this is the least of problems he is facing back at home, Trump may not get any mileage of this issue and may end up continuing to allow trade deficit with China.

Meanwhile, there is an unconfirmed breaking news that a heavy fighting started between both Koreas.