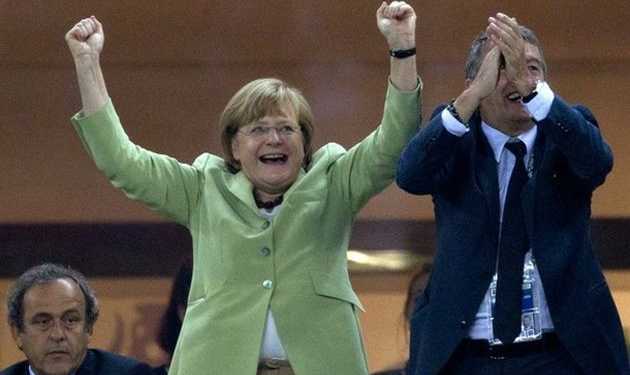 During a debate between Marine Le Pen and Emmanuel Macron, Le Pen had famously said, “France will be governed by a woman… Either me or Madame Merkel”.

The results of French Presidential polls show that it is Madame Merkel who has bested Eurosceptic Marine Le Pen. With Emmanuel Macron winning nearly 65% of the popular vote, it seems that the European Union can breathe easy.

Even though Le Pen is slated to win nearly 10 million votes, more than twice what her father won in 2002, it is clear that the French have chosen continuation of time tested policies against the radical measures promoted by Le Pen. Also, it is now safe to say that unlike US, Europe has been able to avoid the rising Right Wing scare almost entirely.

De Wilders was beaten in the Netherlands, Norbert Hofer in Austria and now Le Pen in France. For now, it appears that Europe has chosen need for stability over other pressing challenges that it faces.

Macron has work cut out for himself. Domestically, he faces the challenge of growing pessimism and lack of faith in the Government, inherited from the abysmal reign of his predecessor, Hollande. Secondly, Joblessness in France is at an all-time high. Pervasive Unionism and the penchant to strike work at the drop of a hat, hasn’t made it easy for Macron’s predecessors to usher in much needed reforms. Thirdly, France is divided like never before.

Macron must realize that he is France’s President only because millions voted for him to prevent Le Pen from winning. Instead of a positive vote for Macron, the French gave an overwhelmingly negative vote against Le Pen.

How Macron unites France, divided between haves and have-nots, right and left wing supporters, Europhiles and Eurosceptics, Urbanites and rural communities will be a huge challenge for the new President. Internal Security will again top the list of challenges that the new occupant of the Élysée Palace.

France has seen as many as 1700 men go to Syria to fight for the Islamic State. In recent months, it has been rocked by bloody terror strikes. How well Macron tackles the rising menace of Islamic terrorism and integrates the migrants remains to be seen.

In short, to put it colloquially, France is screwed socially, economically and politically and it will take all of Macron ‘s abilities to bring France back from the brink of imminent disaster that it faces.

And as if these challenges weren’t enough, France votes again in June to elect a new National Assembly. Will Macron’s En Marche movement be able to overcome its more entrenched Socialist and Right wing opponents and will Le Pen’s Front National outshine others will be keenly watched.

On the international front, France has seen its power diminish with times. It is seen as no more than a junior ally of the British and the Americans and its influence rarely extends beyond the European Union and the Françafrique. Within Europe too, it plays the role of junior partner to Germany that is increasingly seen as the agenda setter, be it on the Austerity front or on the immigration issue.

It will be interesting to see whether Macron continues to play second fiddle to Merkel or if he asserts the French identity and heals French people’s injured pride. BREXIT will also be a key challenge for the new incumbent. Theresa May has already called for Snap elections and the new administration is expected to drive a hard bargain to get the best deal for the country.

Macron will need to don the hat of a key European negotiator as he negotiates the exit of the Perfidious Albion from the European Union, without endangering France’s core interests. The new President will also need to get along with Trump. Given Trump’s truculent nature, Macron-Trump relationship will be closely watched by observers.

France has seen similar challenges in the past as well. The third republic that collapsed before the German onslaught in World War II was mired in corruption and torn asunder by conflicting personalities and incompatible values. France’s degeneracy during the period, known as ‘ la Decadence’ led to the Third Republic being given a quite burial after the war and succeeded by the Fourth and the Fifth Republics in quick succession. Then, France was lucky to have men such as Charles De Gaulle at the helm of their nation.

The Fifth republic seems in some ways as going down the same path as the Third. Given the enormity of challenges facing him, defeating Le Pen was the easier bit for Macron. Will he be the Fifth republic’s De Gaulle or will he be another Francois Hollande, only time will tell.