Liberal Media was fiddling with facts, Israel PM Netanyahu destroyed them in a video message 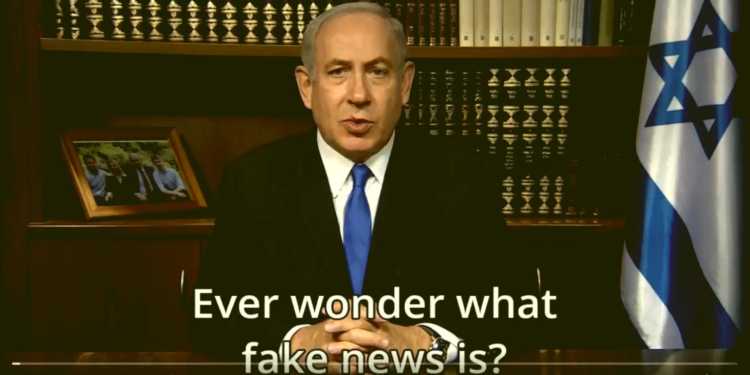 Media outlets including CNN, The New York Times, and The Guardian were once again accused of propagating lies and deceit. No, it’s not Donald Trump this time. Israeli PM Benjamin Netanyahu in a video message bashed the so-called liberal media for presenting facts in distorted manner. The whole issue is about the release of the new policy document by Palestinian terrorist organization ‘Hamas’. The new Hamas document says Israel has no right to exist and they are hell-bent on destroying it. However, they have changed their views towards annihilation of Jews.

Ever wonder what fake news is? pic.twitter.com/gq5DfUMkTT

The CNN’s headline was “Hamas says it accepts ’67 borders, but doesn’t recognize Israel”. Netanyahu called this “fake news” and lambasted media houses “Is moving from calling for genocide of all Jews to calling just for the annihilation of Israel – is that progress, or moderation?”

Hamas first Charter was released to the public in August 1988.It reflected a degree of great intellectual and political dearth. It mentioned “God” 73 times, it uses the term “Islamic” 64 times, “Jihad” is repeated 36 times and the term “Palestine” appears only 27 times.
“Allah is great, Allah is greater than their army, Allah is greater than their airplanes and their weapons,” is one such statement in the charter that is more than enough to prove its absurdity.

It called on Palestinians to attack the Israeli army (IDF) and seek “martyrdom or victory”. It derided Arab countries and their armies: “Has your national zealousness died and your pride run out while the Jews daily perpetrate grave and base crimes against the people and the children?”

In 1987 when Hamas was formed, its leadership consisted of school teachers and local imams and almost entirely made up of Palestinian refugees. They were filled with Anti-Israel and anti-Semitic venom When the pro-Hamas Change and Reform list headed by Ismael Haniyeh won most of the seats in the Palestinian legislative elections in 2007, they refused to accept the international community’s demands to cooperate with Israelis.
The international community represented by Uncle Sam (USA) asked the newly formed Palestinian government to accept three principles.

Firstly, Palestine must recognize the state of Israel without any prejudice. Secondly, Palestinians must abide by the diplomatic agreements. Lastly, they must renounce violence as a means of pursuing their goals.

None of the above condition was accepted by Hamas and as a result the west boycotted them .This resulted in massive Israeli crackdown and rise in terror attacks on Israelis.
It’s still the same today, kids in Palestinian schools are contaminated with ideas such as Jews are the worst humans and only way to reclaim Palestine is through annihilation of Israel. If Hamas first charter can be attributed to lack of political wisdom, the second charter too cannot be defined as “moderate” as defined by the New York Times.

The new charter ‘A Document of General Principles and Policies’ of Hamas makes no reference to the Muslim Brotherhood. Instead, it realigns Hamas’ political outlook to fit somewhere between national and Islamic sentiments. It accepts the idea of establishing a Palestinian state as per the June 1967. Although, it claims that the Palestinian people have legal and moral claim to all of historic Palestine.

It rejects the Oslo agreements and supports all forms of resistance towards Israel. Hamas Leaders believe that the Palestine is illegally occupied by Israel and they have moral right for armed resistance. Also, it does not recognize Israel in any form. Hamas’ new Charter is a dubious attempt at finding political balances within extremely tight political margins. The outcome of Hamas latest charter is not its departure from its previous policy towards Israel which the liberal media of the world is portraying. Actually, the threat to Israel is same as before.

Now, let’s have a look at the media headlines apart from CNN.

Do not get the false impression. It’s a façade and nothing new for mainstream media that tries to portray itself as “Liberal”. Peace can’t prevail until Hamas leaves path of terrorism.

In the end of the video, Prime Minister Netanyahu crumbled the new ‘Hamas’ charter and dumped it in dustbin. The world must agree with him that such charters have no place in International community because they are absurd and full of hatred. Israel’s right to exist must be accepted by the Arab world. But can it happen? Only time will tell.

The remark that turned French Voters against Le Pen