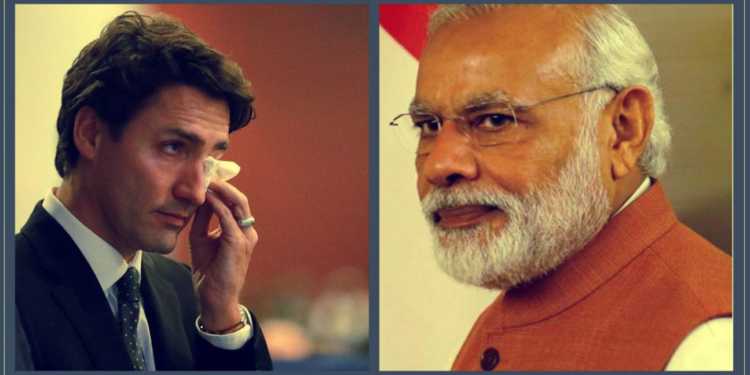 Relatively smooth relations between India and Canada have nevertheless been rocked by controversies and disagreements in the last seven decades or so. While Canada’s anti-imperialist credentials combined with a helpful attitude towards third world country endeared it to the first generation of Indian leaders, it soon became clear that India’s national interests did not necessarily align with Canada’s idealistic world view.

Indo-Canadian relations first came under strain following India’s smiling Buddha nuclear test in 1974. In the decades that followed, Canada became the destination of choice for Khalistani terrorists and their sympathizers. Successive governments in Canada, either out of unawareness or perhaps deferring to the influential Sikh votebank chose to turn a blind eye to Khalistani extremism. Following operation Bluestar, Khalistani terrorists based in Canada planted bombs on Air India flights in Toronto and Tokyo. The bomb aboard Air India Kanishk went off as the flight took off from London, killing all 329 passengers and 22 crew. It is believed that Canadian intelligence had an inkling of the plan but did not act in time. It took Canada 20 years to complete the trial against the conspirators. In what can only be termed as a travesty of justice, all the main conspirators walked out free, much to the horror of families of the bereaved. With the dolt Trudeau at the helm, Khalistani elements in Canada are only gaining strength. Trudeau’s presence at Khalsa day in Toronto, a renowned pro-Khalistani platform raised India’s ire recently. 2 individuals honoured at Khalsa day are well-known as proponents of a bill that saw Ontario assembly designate 1984 riots as genocide. And thats not it. A hardline group, Sikhs for justice plans to launch efforts for Punjab independence referendum 2020 in Toronto and other North American cities. Punjab CM, Amarinder Singh had recently refused to meet Canadian defence minister, Harjit Singh Sajjan, calling him ‘a Khalistani sympathizer’. It is a known fact that Khalistani elements have infilitrated Canadian government structures and are able to influence policy decisions to meet their insidious objectives.

In spite of the grave provocations mentioned above, it goes to India’s credit that it still counts Canada as one of its friends and allies. Unfortunately, Canada does not seem to comprehend India’s rising power and continues to indulge in actions that are bound to raise India’s hackles. An ex- IG, CRPF, Tejinder Singh Dhillon, who retired from the force 7 years ago, was denied entry at Vancouver airport, ostensibly because the authorities felt he served a government that dealt in “terrorism, systematic or gross human rights violations, or genocide”. Preposterous as it sounds, Dhillon was subjected to interrogation lasting hours, during which he was treated indecently and was deported the next day. Adding insult to injury, Dhillon was made to talk through a Punjabi interpretor even though he is well versed in English. Documents released by the Canadian authorities described CRPF as a force that had ‘committed widespread and systemic human rights abuses, for example torture, arbitrary detention, murder and sexual assault”. Even though Canadian authorities tried to cover up the situation later, it was apparent that the choice of words in documents released by Canada branded India as a country that committs genocide while marking CRPF as a force that indulged in human rights abuses.

Sadly, this is not the first time that Canada has indulged in the ill-treatment of Indian armed forces officers and Punjab police personnel. Canada has denied visa and deported Indian personnel in the past on grounds of Human rights violation, citing its legislative policies. Incidentally, Punjab CM, Amarinder Singh was forced to cancel his plans to visit Canada, after being threatened with a case related to torture in a Toronto court. Canada has made no efforts in the past to rein in Khalistani elements and defer to India’s sensitivities. All the talk of good relations notwithstanding, Canada has repeatedly indulged in incidents that are bound to hurt India’s interests. For instance, even though the Canadian ambassador apologized for the ill treatment meted out to Dhillon, there is no guarantee that Canadian authorities would not selectively interpret Canadian laws to insult Indian personnel in the future.

A nation that respects itself is the one that is respected internationally.

It is essential that the Government of India does not allow Canada to go unpunished this time around. India, much like China, must use its rising economic clout to signal clearly that it should not be taken lightly.

Canada must not be allowed to get away on flimsy idealistic pretexts such as liberal values and a concern for human rights. Like Doval once said, India has traditionally punched below its weight. It is imperative that the External Affairs establishment under Sushma Swaraj get its act together and haul Canada over the coals to send a strong message that India will not take such slights lightly in the future. In the long run, India must use its influence to force Canada to defand and disarm Khalistani sympathizers in its territories.