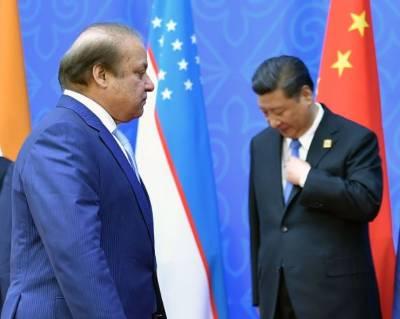 Xi Xinping had snubbed Nawaz Sharif by not having a bilateral talk, while being engaged with Narendra Modi in a forty minute talks. Though there was nothing substantial except routine discussion on maintaining status quo in the discussions between Modi and Xi, the denial of audience to Nawaz Sharif was a point of discussion in Pakistani press. Of course, it is widely known what the reason for the royal snub to Pakistan was the abduction and killing of two Chinese.

How can Pakistan antagonise their masters? Can a vassal king afford to ignore safety of Emporer’s people? Pakistan had investigated with all its power and might and concluded that indeed the two Chinese men were abducted by ISIS gang. Not only that, Pakistan had even revealed the motive behind their abduction and capture. Apparently, the dead Chinese citizens were doing the job of god i.e., preaching Christianity.

And, this revelation shifted the origin of problem to China and caused a loss of face to China. As a Communist Atheist regime, it was never the policy of China to take up the cause of proselytisation. Never China cared for any other religion – at least officially. In fact, China has recognised the destabilising power of proselytisation long ago. Way back in 2015, China has acknowledged that evangelising in Muslim countries is fraught with risk.

With the latest expose from a subdued vassal state questioning how evangelists have come from China to spread the gospel in the first Islamic Republic of the world has left China scrambling for words. Of course, the evangelists must have had connived with some Chinese officials. And, it only complicate matters as the issue would precipitate to the fact that someone in the official hierarchy of China was supporting evangelists secretly.

So, China started picking up the strings from where it has left them two years ago. According to their official position, it was a plot by the missionaries in South Korea. Koreans do lure young Chinese and after conversion they use them to spread the word of gospel in Muslim countries. China also doubts that these religious groups might be sponsored by secret agencies of South Korea. China even stated these missionaries offer free air tickets, accommodation and meals to the young Chinese, who go to South Korea as students.

Well, the time has come for China, officially an atheist country to act religiously on religious groups that work against the nation’s interests. After all, what business god and god-men have to interfere in the business between two nations?

Of course, China has passed the buck to South Korea. But, it is not sufficient. Evangelists or not, Chinese cannot be killed by Pakistani terrorists. After a rap on knuckles, Pakistani army had obeyed the orders. A 15,000 strong force would be safeguarding the Chinese interests in Pakistan i.e., CPEC related projects.

Sindh, a sanctuary of Dawood Ibrahim would be raising a force of 2600 police officers to protect about 5000 Chinese who are there either working or on business. Khyber Pakhtunkhwa province would be raising a force of 4,200 and started to carry out a census of Chinese in their province so they can be safeguarded. Balochistan would be totally reviewing the security situation. Well, China really controls Pakistan.

Even if one accepts the fact that Pakistain Army is now functioning like a security agency to expatriate Chinese, the speed at which Pakistan had completed the investigation and returned the buck to China only highlights the criticality of ‘religious conversions’ used and abused by all Abrahamic religions to control socio-political space of all nations where evangelists have set their foot upon.

Preaching is against Chinese policies and the accusation by Pakistan that killed Chinese were converting locals had touched a raw nerve forcing Chinese to fall back on a two year old accusation blaming South Korea. China’s concern, however is not conversions but security of other citizens. These killings have rattled Chinese working in Pakistan as it has exposed limitations of the ‘Sense of Security’ Pakistani Army tried to create in the minds of the orientals. Evangelists or not, ISIS or some other extremist, China will now have to consider the security of their people seriously.

These killings have given a chance to both Chinese establishment and Pakistani Army.

Now, citing the shortfall in the capabilities of Pakistani Army, Chinese would move in their own agencies to protect their citizens. This would effectively reduce Pakistani Army, Police and other security agencies to the level of ‘guards of a security firm’. To quell the outrage by Pakistani media and people, who are expected to oppose the entry of Chinese security agencies, China will start arming the Pakistani police. Well, the Pakistani police would be modernised, but the side effect of this modernisation is they will also become more brutal.

Control of Pakistani Army & Police would shift from the Pakistani government to China. As such, Army was never under the control of civilian government, with CIA being the only agency that can control Pakistani Army. Now, Red Army will be the new master.

The other factor here is how China and Pakistan responded to the matter of ‘Conversions‘. In a way, a nation of converts and atheists oppose ‘Conversions’ and call it way to ‘destabilise the society’. So, both Islamists and Atheists accept the fact that ‘Conversions’ do affect the social harmony between various groups and both oppose religious conversions so the society can remain in peace.

Well, if the same is said in India the one who says so would be called a ‘Chaddi wearing Sanghi’ who was a retrograde Pagan, who doesn’t accept the modern aspects of stagnated religions. ‘The Right to Propagate’ is used and abused by followers of foreign religions. Funnily though, when a person returns to his original fold, it is decried as an attempt by the Saffron forces. The greatest irony of Indian democracy is there is nothing Indian in it and neither it is democratic. Of course, control of majority by minorities is not exactly termed ‘democratic’.

Meanwhile, China will now convert Pakistan into another experimental laboratory for its Pseudo-Communism. The way Chinese have reduced Uyghurs to minority in Xin Xiang, rings alarm bells to the hard liners of Islam in Pakistan. It is only a matter of time now.